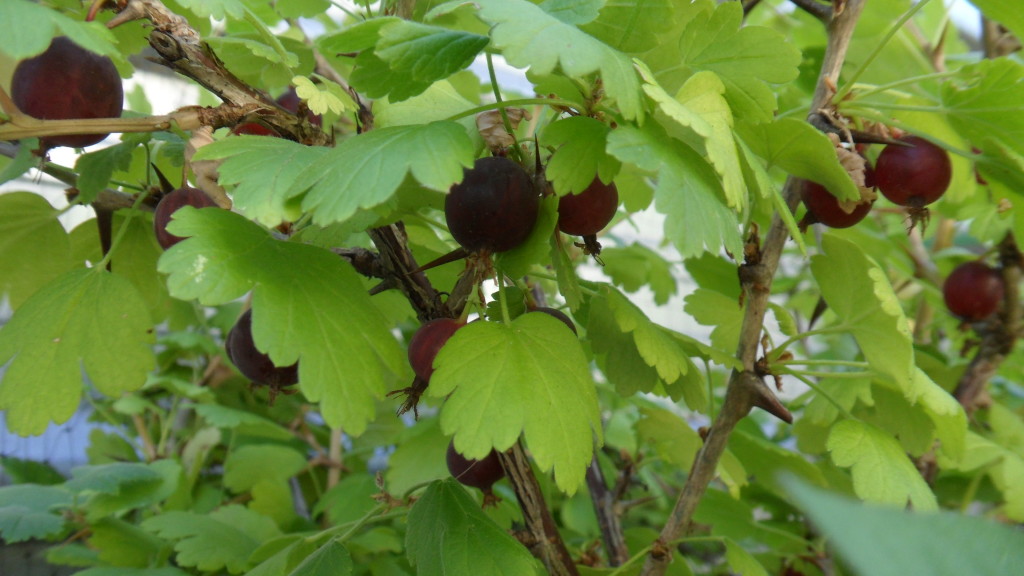 The first thing that needs to be said about the Worcesterberry plant is that this is a vicious, thorny, beast, so make sure to wear a thick pair of gloves when picking berries or pruning because you can easily end up with more scratches than berries. 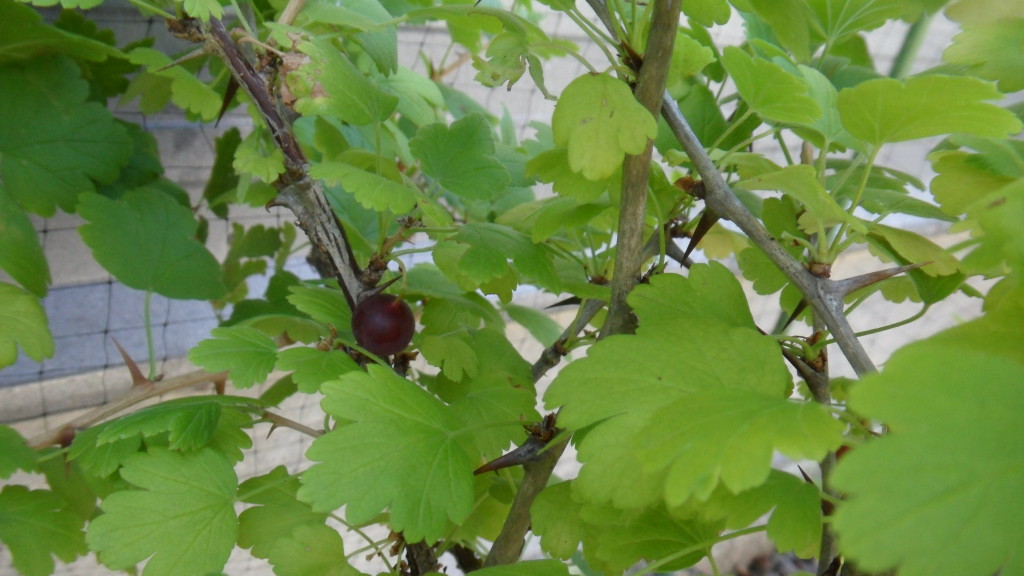 The Worcesterberry plant I have is two or three years old and it is grown in a pot. The plant now measures about 60cm tall and about 130cm wide, but if planted in the ground and in the right conditions they can grow into a large bush about 2 meters (nearly 7 feet wide), and can sometimes grow to be 3 meters. The Worcesterberry plant is mildew resistant, and is deciduous.

At the beginning of autumn the Worcesterberry leaves turn shades of red, orange and apricot, as the plant prepares to drop its leaves for the winter: 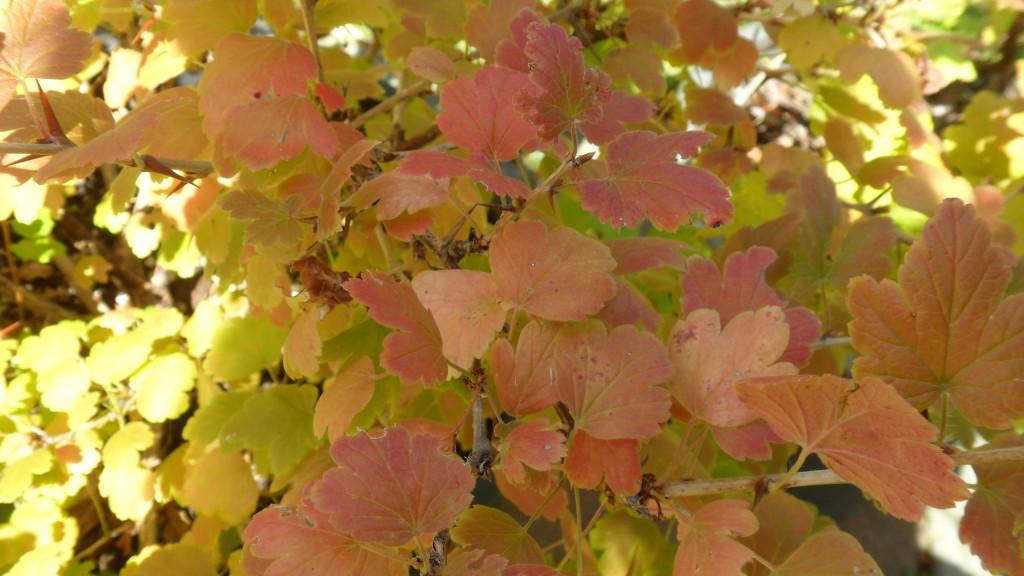 The ripe berries are small, much like the size of a currant, measuring between 10-15mm across. 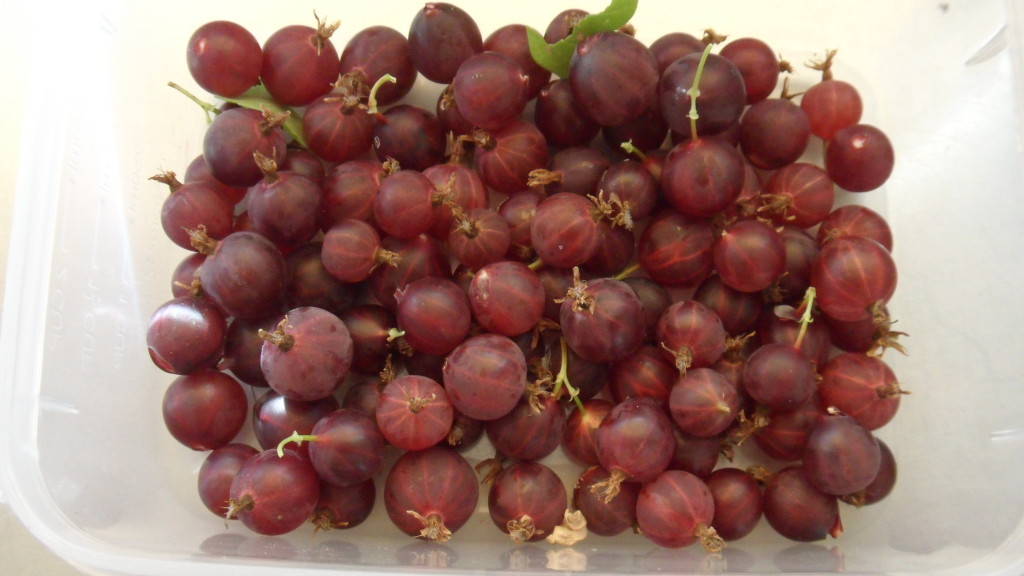 There are about 5 hard little black seeds inside each berry. 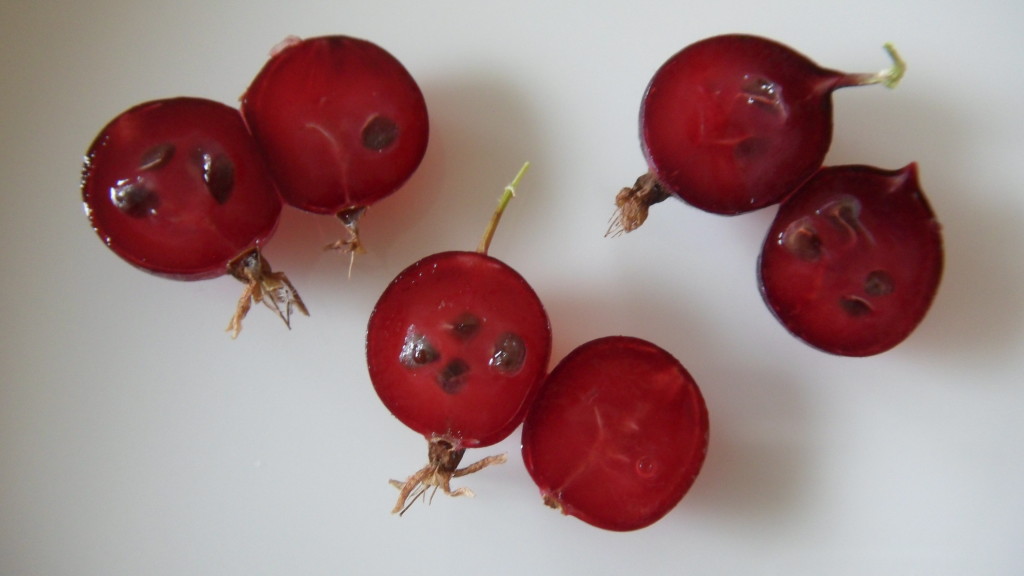 In New Zealand the berries form in October (mid-spring-time). By the beginning of November they are about 5mm across and are green in colour, the same shade as the leaves, making them difficult to see as they are camouflaged. The colour of the berries progresses from green to a dark red, almost black and the berries are ready to harvest in early January (mid-summer). Fruiting finishes in early February. Birds will attack the plant for the ripe berries (and even berries that are starting to ripen) and it is a good idea to fence the plants off with bird-netting.

The berries can be turned into wine, jam, jelly, sauces, or mix with apple to make a Worcesterberry and apple crumble, or pie. The berries also freeze well.

I haven’t found much literature on pruning the Worcesterberry, so we treat it as a gooseberry. You can prune in late autumn (around about May / June in New Zealand), but it is best to prune in winter when the plant’s sap is down. Cut out any branches that cross over or rub, then aim to cut out wood to open the centre of the plant out (think about how to harvest the fruit next year and not get scratched). Very old wood can be cut out, and the berries will form on this year’s new wood, just reduce the previous summers growth at the end of each main shoot.

In the autumn and spring, place organic material around the base of the bush to keep it well fed in its downtime and just before it picks up growth again.

The Worcesterberry is a hardwood, and to propagate you just need a pair of sharp secateurs. In early autumn, cut a straight length of wood that has grown in the previous year. Cut it about 30cm long and on an angle just below a bud. Either plant the cutting in a pot in good potting mix, or plant straight in the garden, placing the cutting in the soil so half is above ground and half is below.

We bought our Worcester Berry from Edible Garden Ltd,