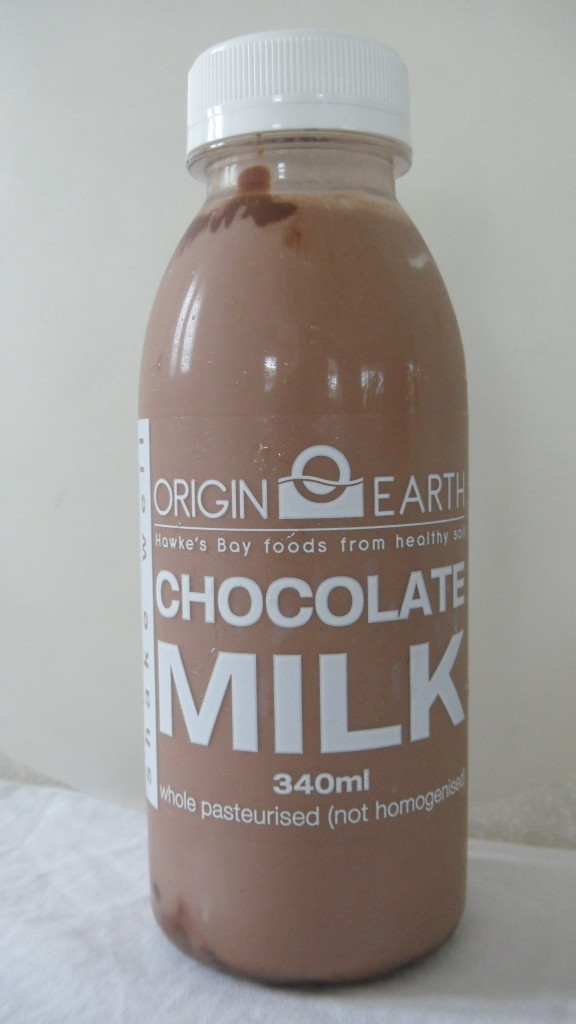 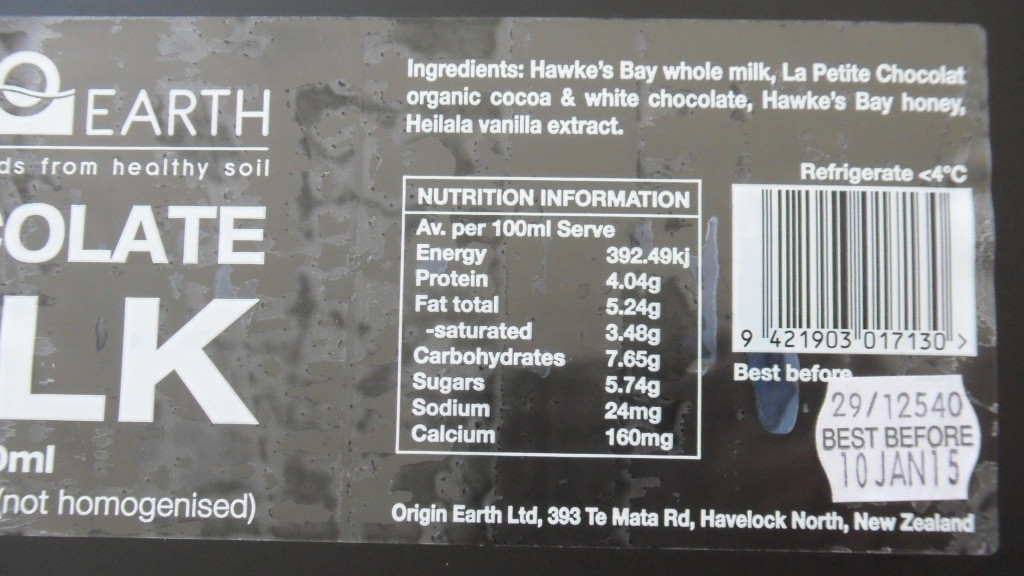 Origin Earth is keeping it local by using locally sourced Hawke’s Bay products to flavour and sweeten the chocolate milk.

When I researched Origin Earth’s chocolate milk product I found very worthy sentiments and core values behind this milk. Origin Earth is a small Hawke’s Bay milk company based in Havelock North. Their milk is whole pasteurized milk that is not homogenised, stabilised or separated, and the cows graze on biologically managed soils. Joanie Williams and her husband launched the company in 2009, and Origin Earth produces not only milk, but also yoghurt and cheeses.

The traceability of food is becoming more important and Origin Earth milk can just about be traced back to the cow of origin, and can definitely be traced back to the paddock, and herd it came from. This practically gives the milk a terroir, the term used mainly when talking of fine wines that can be traced to certain regions due to the attributes and flavours it has taken on from the land; the characteristics of a regions soils, geography, geology, and climate.

Origin Earth has a commitment to local products, and there is certainly no shortage of local producers of fine quality products in this part of the world.  This chocolate milk has no added sugar, instead honey provides the sweetness, sourced from Hawke’s Bay company the Naked Honey Pot, who produce different kinds of bush honey and have hives located between Napier and Putere farming district in remote bush areas.  And, – I’m very excited about this one – chocolate makers, La Petit Chocolat of Havelock North, provide the organic white and dark chocolate in the milk (this seriously is the best chocolate ever!)

The only ingredient in the milk that isn’t local is the Heilala Vanilla extract, and this is a company with a whole story on its own about ethical practices, sustainability, organic farming, and aiding small communities. (Heilala Vanilla started as a Tongan aid project and became a business producing 100% pure vanilla products. The business practices organic, sustainable farming all while enabling a community to have access to education and infrastructure that they may not have had otherwise.)

Competing New Zealand milk company Lewis Road’s chocolate milk appeared on the market at nearly the same time – Lewis Road was slightly ahead, appearing in about October 2014 and Origin Earth was released in early December 2014. We all know that a lack of supply of the Lewis Road chocolate milk generated hype to such an escalated scale that a whole black market started, making it a highly sought after commercial product. I have only just got to try the Lewis Road chocolate milk, which is very sweet and tastes delicious, but according to Consumer magazine (November 2014 issue) it is high in fat, sugar and sodium (not that that matters if you drink it in moderation).

Origin Earth milk is more of a ‘health conscious’ choice of chocolate milk retaining that dark chocolate flavour, but with far less sweetness, which is what I would expect from a product sweetened with honey rather than sugar, and it contains half the sugar and salt, significantly less kilojoules, less total fat content, and less saturated fat and more calcium than most leading chocolate milk brands.

Origin Earth Chocolate Milk needs a good shake to mix the contents and is $4.00 for a 340ml bottle. I found this product in New World Supermarket, Greenmeadows. It is also available at the Hawke’s Bay Famers’ Market, which is open on Sundays at the A&P Showgrounds in Hastings http://www.hawkesbayfarmersmarket.co.nz