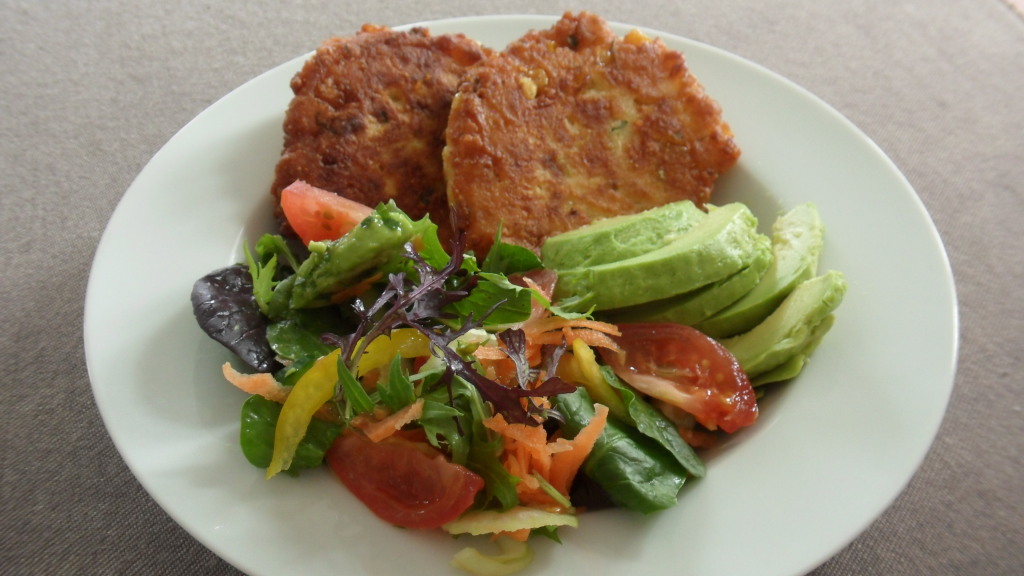 Fried haloumi cheese is a nice addition to the meal (we added this to our meal, but this is not in the photo).

This is seriously the best corn fritter recipe and is the one we will be using from now on. Before finding this recipe, Mum had two standard recipes for corn fritters: the up-market French Cordon Bleu recipe, which requires beating egg yolks, then beating egg whites, and adding fresh breadcrumbs; the second recipe Mum has for corn fritters is less fussy, and is a standard recipe, using flour, egg, and corn. Both recipes were fine, but lacked something.

Then, we came across this recipe – Parmesan Polenta Corn Fritters. What makes this recipe so brilliant is not only do the fritters cook well, and have a lovely flavour, but they also have a springy consistency without being rubbery, and are densely packed with ingredients, without being heavy.

The original recipe is from the book The Chelsea Cafe, by Jo Seagar, published in 2005. I had this book with me on a visit to Mum, who flicked through the pages and spotted this corn fritter recipe, and was eager to try it. When I returned home, I took the book with me. Soon after I arrived home, my phone beeped with a text message from Mum, in which she asked me if I could get a photocopy of the corn fritter recipe? I replied saying I was prepared already and had the page marked ready to copy. “You’re amaizing!”, replied Mum. I laughed out loud when I read this, as Mum’s corn reference was very witty and I told her so. “It’s a bit corny, really”, came Mum’s text reply. Well done Mum, A+ for wit.

Fritters can be made ahead of time and frozen for up to three months, ready for use for quick, pre-prepared meals.

Add the eggs to a large bowl, and whisk them slightly. Add all ingredients (except oil) to the bowl, and mix to a smooth batter. Extra milk may be required, but the mixture shouldn’t be too runny.

Heat oil in a fry-pan and add heaped tablespoons of batter to the hot pan. Fry the fritters until they are golden brown on both sides and set in the middle.

Mum and I made a few changes to the original recipe: