I have discovered that cupcakes are very good for improving staff morale; they are very much mini-morale-boosters. Twice now, my work-team have placed orders at Petit Fours for cupcakes to bring back to the office. Cupcakes also strengthen our inter-team communication, and task management responsibilities through gathering the orders and phoning in the order, trusting someone with the onerous task of collecting the money, and democratically deciding who the lucky person to collect the cupcakes will be.

My colleagues had worked out between themselves that I would be the safest person to go and pick up the cupcakes. “Your the only one we trust”, they said, and before my pride could take hold at this compliment, they then went on to say that their reasoning went that because I take time eating my food, and am known to be a slow eater, I wouldn’t be able to consume too many cupcakes on the walk back to work. It’s funny how my workmates can remain likeable even when they are being mischievous.  Practical as ever, LA pointed out that there was a fault in this plan – that even if I was slow at eating cupcakes, I would still have plenty of time to just eat the icing off instead (and we all know that the icing is the best bit of the cupcake). I liked this plan! I looked up from my work and said “I’m right here, listening to all this!” But, all this talk had put an idea in my head and I can’t deny that I was perfecting a plan. I like a good challenge: I’ll show them how fast I can eat cupcakes! After walking into work carrying the box of cupcakes, and after having made sure to brush the cake crumbs away from my clothes and around my mouth as well, I would have unleashed my special look of innocence, my “it couldn’t possibly have been me” look. Seriously, what do they think I am? Do we need a cupcake auditor to accompany me to collect the cupcakes?

The whole matter became moot when we decided to get the cupcakes delivered to work as it was “Free Delivery Friday” at Petit Fours.

As well as it being “Free Delivery Friday”, the cupcakes were based on a theme of flavours inspired by Whittaker’s chocolates: 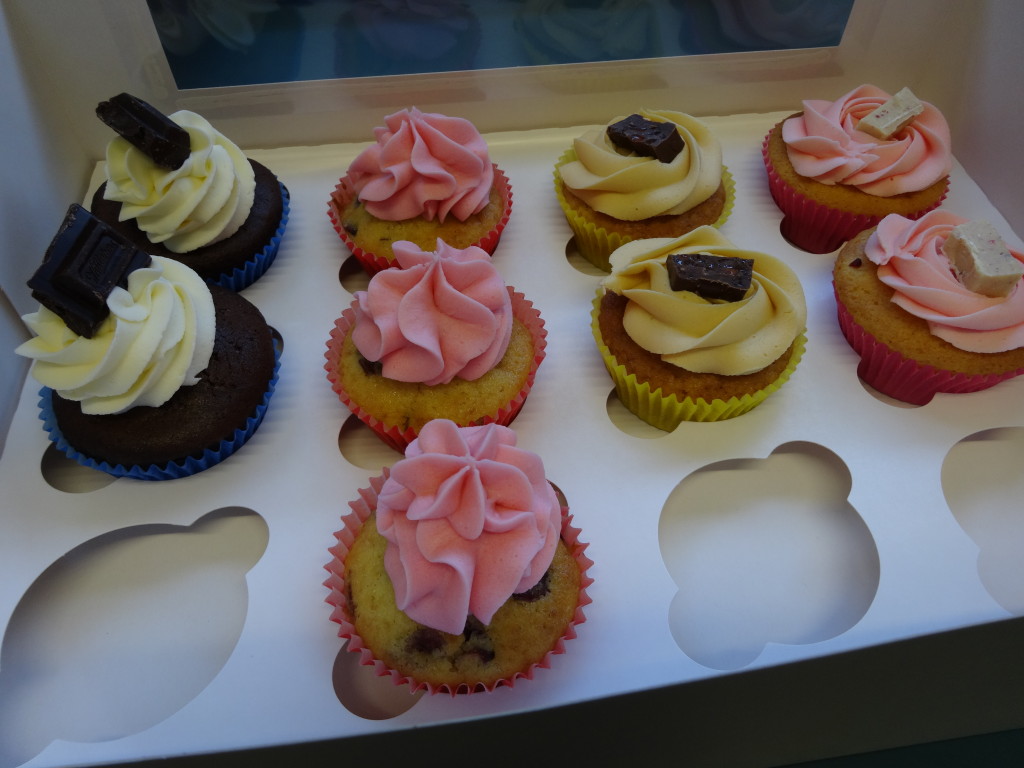 I had the Hokey Pokey, complete with a piece of Whittaker’s Hokey Pokey chocolate on top and in the centre was a thick sauce of sweet sugary hokey pokey loveliness. Thanks to DL, we had special food-matched serviettes featuring cupcakes – when it comes to food in our department we don’t do anything by halves! 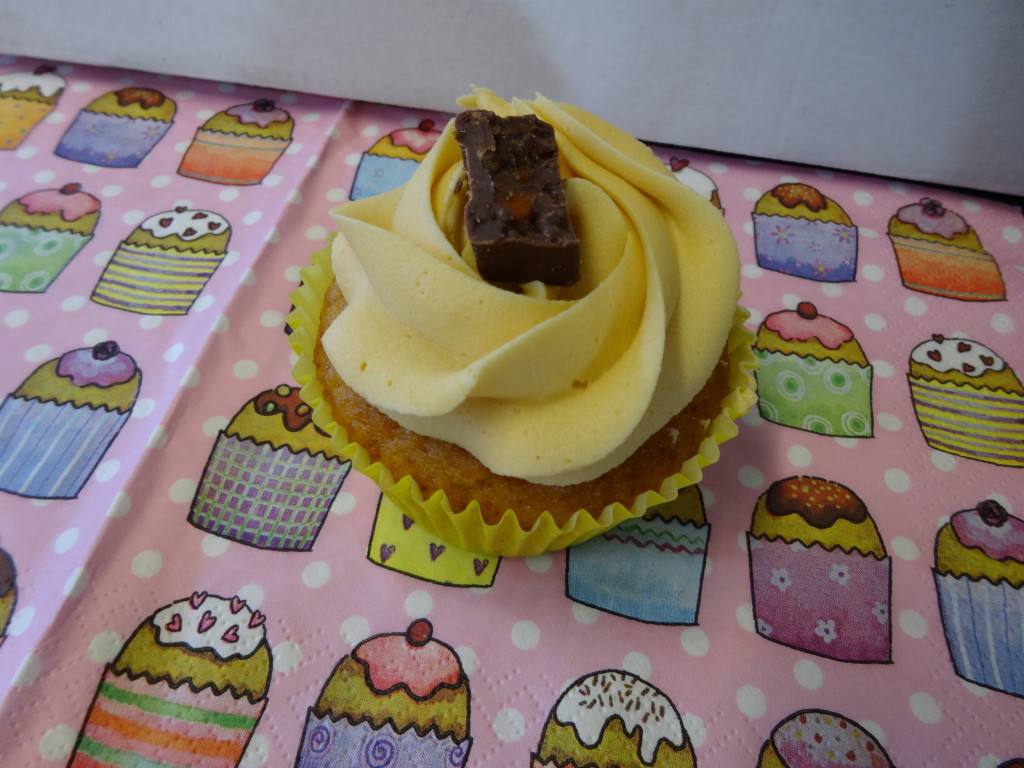 Since the first cupcake order had worked out so well, we decided on a second trip to Petit Fours to bring cupcakes back to the office. Being keen to put my Cupcake Collector duties that I had been delegated into action this time around, I said I would collect them. Next thing, I find that two of us are going to collect the cupcakes. One as auditor maybe? As it happened, two people were needed to collect them, as the box full of cupcakes was large and unwieldy and someone needed to be present to open doors for the precious cargo. Also, the cupcakes were loaded into the box with special instructions of which flavour was which and what was gluten free and so on, and with our order being a big one, we needed a second pair of ears listening to get this all right when handing out the cupcakes at the office.

The day we went, the flavours to choose from were:

Snickers, Pina Colada, Red Velvet, Passionfruit, Maple Pecan, Lemon, Peanut Buttercup, After Dinner Mint, and something new called The Minstrel. We had no idea what this could be, so after a phone-call to Petit Fours, The Minstrel is described as chocolate and vanilla marbled together to form the cupcake base, with chocolate mousse in the middle, vanilla buttercream icing, chocolate sauce drizzled over the icing, and a crispello chocolate on top.

I was sold on that – here it is, The Minstrel: 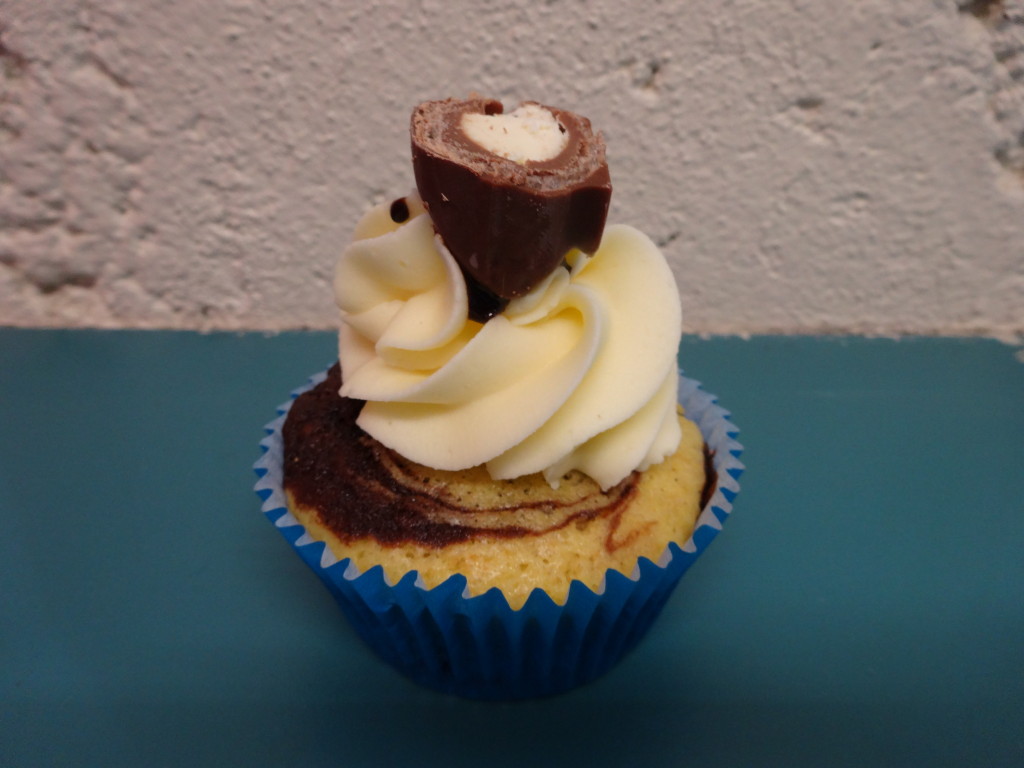 …..and it tasted spectacular.