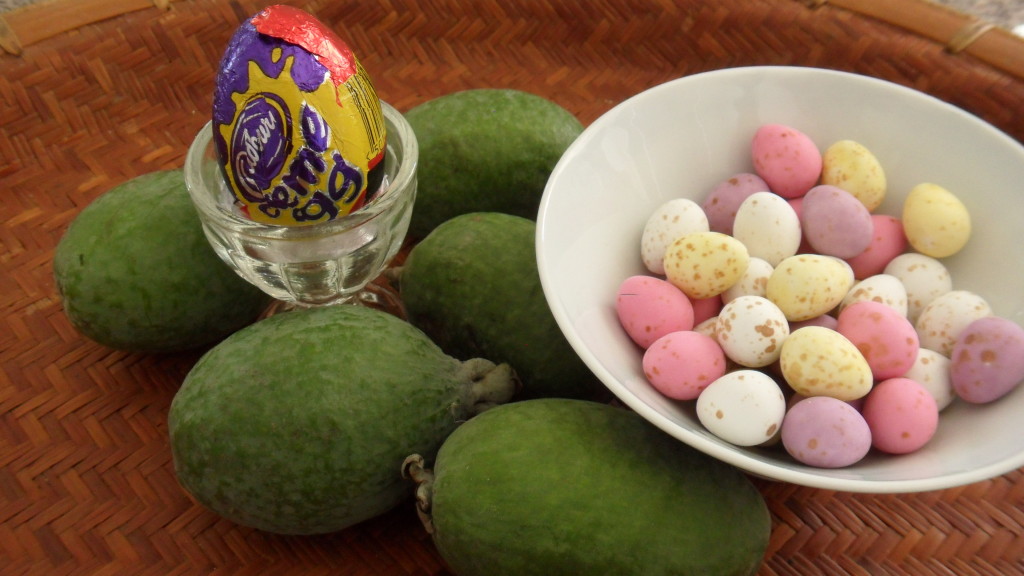 A selection of eggs and chocolate for an egg-scellent ‘healthy’ Easter feast : Creme Egg, Green Eggs (feijoas), and Candy Covered Chocolate Eggs. (We did actually have a boiled egg for Easter Breakfast followed by the traditional Creme Egg, egg-cetera, egg-cetera).

Mum had just read an article and commented on how eating dark chocolate improves overall health. I read an article about how eating eggs improves brain health. Mum must have eaten her eggs and chocolate that day because she had an egg-ceptionally brilliant thought on how to combine the two healthy ideas – chocolate and eggs – “oh, I’ll eat chocolate eggs!” she said.

Well, so much for Mum saying she wasn’t going to do any baking over the Easter holidays. Looking at the list of things we baked and made, anyone would think we were going for a record of how much we could make and bake over a holiday. We both had an extended Easter holiday of 10 days, and it was nice that we could coincide our holiday times. We made recipes from Heston Blumenthal, Nadia Lim, Ray McVinnie, recipes off the internet, from Woman’s Day magazine, New Zealand Woman’s Weekly magazine, New Zealand House and Garden magazine, Toast magazine, Mum’s recipe books, ideas out of Taste NZ magazine, recipes from friends, from the Sunday newspaper supplement, and of course Mum made some up. Mum’s horoscope said it had been “a short but intense week”. How true! We had a good laugh at that.

Here’s the list of the main items we made…..Mum had made Hot Cross Buns just before I arrived at her house – the oven was still warm and the Buns were cooling on the bench. Out of the flour paste left in the piping bag from the crosses on the buns, Mum had written ‘Happy Easter” and fashioned some cute shapes, an egg and a chicken, to place on top of the cooked buns. To continue the Easter theme, we set about making our own hollow Easter chocolates using moulds in the shapes of rabbits and eggs. We set the chocolate moulds in the fridge, then filled the hollow chocolates with Chocolate Ganache from a recipe by Heston Blumenthal. With the leftover Chocolate Ganache we made chocolate truffles covered in cocoa. Next, we made Vanilla Easter Biscuits, in the shapes of eggs, rabbits and chickens, and had lots of fun icing them with colourful royal icing. These were the one thing I wanted to bake these holidays and I cannot overstate the amount of fun Mum and I had icing these. We also tried our hand at a bit of Easter-themed origami and made rabbits out of serviettes, which were very cute and turned out well.

The iced Vanilla Biscuits. I am very pleased with the way these turned out. 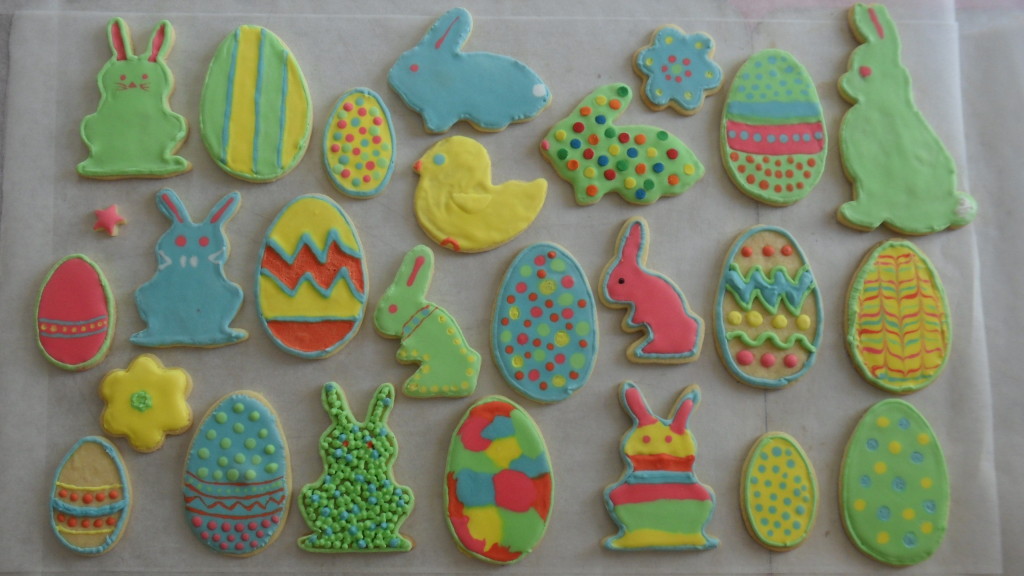 Feijoa season coincided with Easter-time holidays so we made lots of feijoa goodies too – Instant Feijoa Ice-cream using Nadia Lims recipe, and we made Coconut Shards to go with the ice-cream from a recipe by Ray McVinnie. The ice-cream contains crystallised ginger: feijoa and ginger is always a winning combination, and we also had Feijoas Poached in Ginger Syrup. Then even more feijoas in Feijoa and Apple Porridge, and stewed feijoas served with a home-made custard, as well as consuming many raw feijoas.

Some holiday Feijoa Fun – a Vampire Feijoa (don’t ask why). 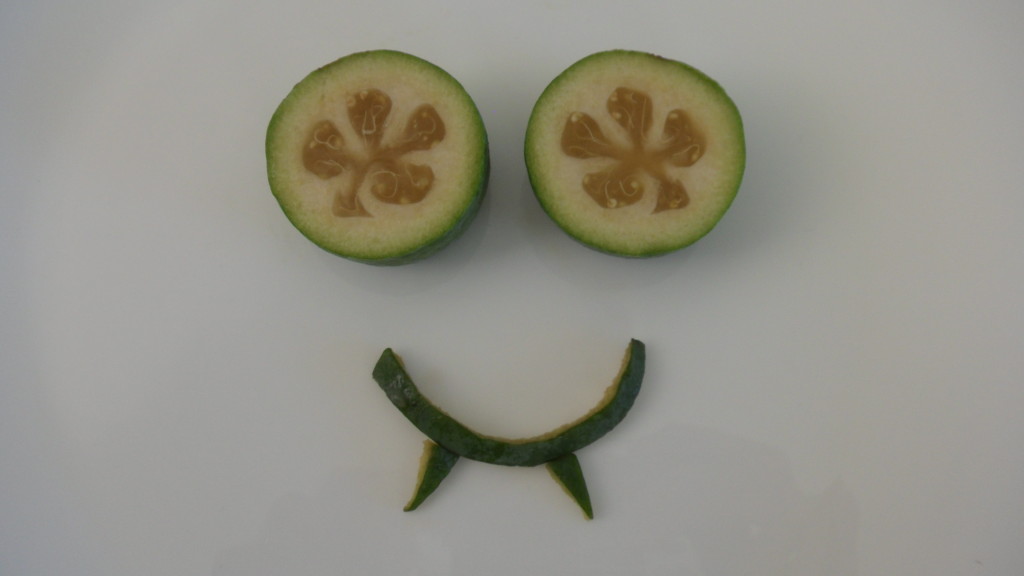 As for liquids, we made cold pressed coffee, and tried a cocktail of Cointreau Fizz. We had a great wine: Redmetal Vineyards, Hawke’s Bay, Syrah, 2012. The wine had lovely licorice after-notes and I would definitely buy it again. We food matched this with a pasta dish of Spinach, Pine-nut and Ricotta Pasta Shells (the pasta was extra large Conchiglioni Shells). This was a very tasty dinner but I won’t be blogging the recipe just yet as I didn’t get a good enough photo. We drank the remainder of the wine the next night (and it went well with Fish and Chips!)

We made a Mushroom, Spinach, Feta, and Filo Tart from a recipe that was called Best Brunch Tart, but Mum changed the recipe so much it became unrecognisable from the original, hence the change in the name. We also made a Chickpea Stew and accompanied it with Kumara, cheese and pineapple mash.

We went shopping at a specialty food store, Vetro, and I found a packet of freeze-dried raspberry powder from the New Zealand company, Fresh As, so we made a Raspberry Powder Smoothie, and have plans to include the raspberry powder in a mixture to make lovely pink coloured Raspberry Meringues with cream.

Plus there was lots and lots and lots of food photography, which my brother coined a new word for: ‘foodography’. I love this word, it is so usable and describes perfectly what it is.

Mum also coined some new terminology – a ‘squeak’ which means ‘a small, weak coffee’. This came about because it was late at night and Mum was tired and “I’ll have a small, weak coffee” came out as “squeak”. A small weak coffee is probably about the same amount as a ‘pidney’ which means the amount of coffee left in the bottom of a jar, not quite a teaspoonful, and not enough to make a cup of coffee. (Douglas Adams came up with the word ‘pidney’ in his book The Meaning of Liff, published in 1983, which is “a dictionary of things there aren’t any words for yet”).

I think we managed our time very productively. But we seemed to be doing dishes all the time, not just from all the baking, but from regular meals as well, and I got terrible ‘dish-pan’ hands.* And looking at the list of items, I’m feeling rather tired after that holiday, so I’m going to go to work for a rest (well, in reality, maybe not but it’s a nice idea).

Most of the recipes will be in upcoming blogs soon, and I have organised myself with a detailed work-plan because I have so much information to remember to include!!

The freeze-dried powders can be found here: www.fresh-as.com

* The best hand-creme I have found so far is Savar Advanced Hand Repair. It does the job and has a delicate violet fragrance and is not too greasy. It is very soothing after you have been doing too many dishes! Savar is a New Zealand company specialising in natural products.