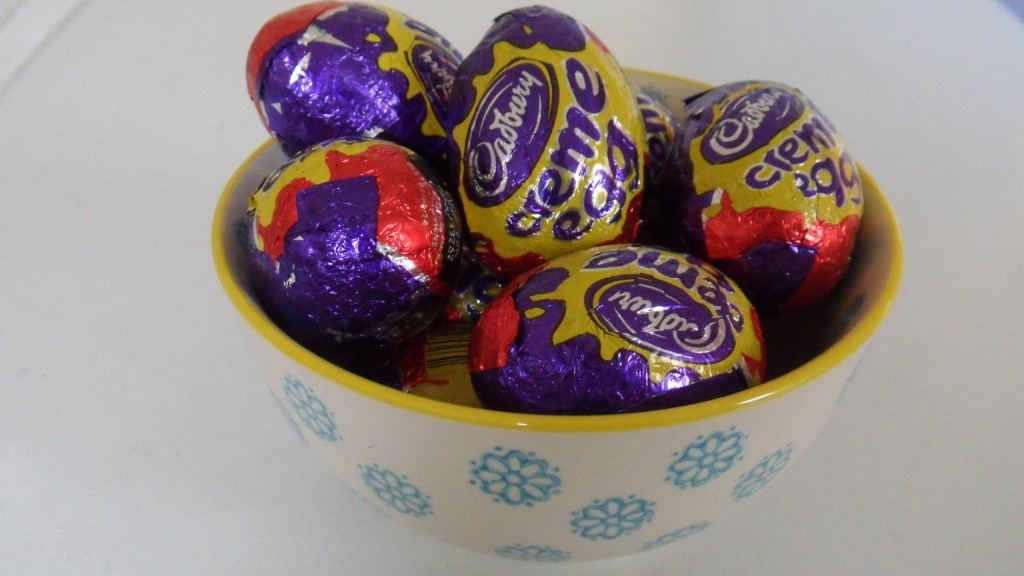 A workmate (TB) waived a magazine article under my nose. Of course it was about food, but not only was it about food, but it was specifically about chocolate, so it got my full attention. The article appeared in Wired magazine (April 2014 issue) and it featured the process of making a Cadbury Creme Egg: the chocolate mixing stage; the making of the chocolate shell; the making of the “white” and the “yolk”; filling the shells; cooling the eggs; then wrapping them in foil.

The Cadbury factory in Birmingham, England produces 350 million of these Creme Eggs over a year and they are made year round, but only sold from January to Easter-time.

I found the amount of chocolate the Cadbury Birmingham company goes through in an hour to be staggering – one ton of chocolate every hour! And there are other Cadbury companies around the world also going through staggering amounts of chocolate.

Have you ever wondered what ingredients go into the centre of the egg to make the “white” and the “yolk”? They are made of sugar, wheat glucose syrup, invert sugar, and egg albumen (egg white). The yellow contains natural food colouring made from paprika oleoresin. When this sugary filling is dropped into the chocolate egg shell, the white goes in first, followed by the yellow. The yellow filling is denser than the white, so the two colours stay separate. This produces the distinction between the albumen (white) and yolk (yellow) just like in a real egg. Next the two halves of the egg-shaped mould are closed together and the eggs are slowly cooled with air coolers. A mechanical arm picks up the hardened eggs and spins the egg while wrapping it in foil.

The Creme Eggs I have here in New Zealand were made at the Birmingham factory. They were then packed in Australia and imported into New Zealand by Cadbury in Dunedin. I found it very interesting to note that Creme Eggs were actually made in Dunedin, New Zealand from 1983 up until 2009. According to the Cadbury New Zealand website, the Creme Egg comes from Chocolate Chickens ….(haha very funny).

There was a bit of controversy (actually rather a lot of controversy) over Cadbury New Zealand’s quality of chocolate in 2009, that saw widespread boycott action. Cadbury decided to cut back on cocoa butter and added palm oil instead (which was listed as vegetable fat). This happened at a time of cost-cutting, restructuring and outsourcing at Cadbury’s. Public backlash over the addition of palm oil was very strong and Cadbury damaged its reputation as a trusted brand. Also at this time blocks of chocolate became smaller. People noticed that not only were blocks smaller, but the taste of the chocolate wasn’t the same and the increase of vegetable fat (palm oil) meant that the chocolate took longer to melt in the mouth and left a greasy feel behind, plus there was the environmental impact of using palm oil to consider. Consumer pressure won out. There is no palm oil in Dairy Milk Milk chocolate that is made and sold in New Zealand.

The Wired article says the UK Creme Eggs contain free-range egg powder, but the ingredients on the bag and website don’t mention free-range. I hope it is. The UK Cadbury website has a tiny symbol which I think says ‘suitable for vegetarians’, which is good to know. The fair-trade logo is on blocks of Cadbury chocolate or products that contain fair-trade chocolate, but I do not see it on the Creme Egg packet.

At one point there was a slogan for Creme Eggs that read: “How do you eat yours?”

Well, this is how I eat mine at Easter, traditionally on Easter Sunday….Cream Eggs taste egg-stra special in an egg-cup : 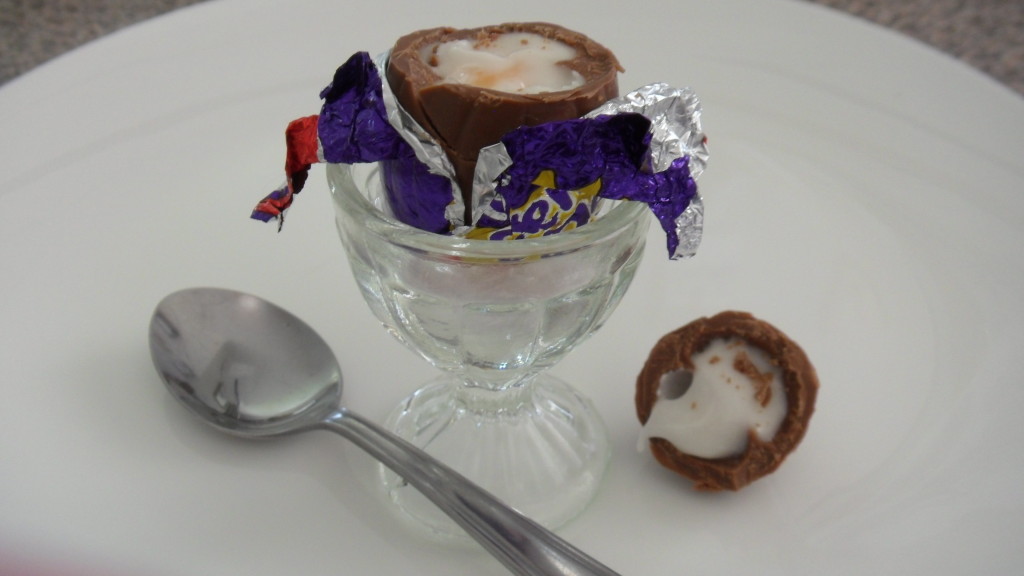 Years ago crème eggs were bigger and fitted more snugly into an egg cup. I had to bolster this egg up. They are now 39g each.

Over the years, Creme Eggs have not only reduced in size but the filling has become firmer whereas it used to be runny ; the yolk part is smaller and not as yellow, or defined ; the chocolate divider has disappeared (that used to sit centrally between the halves) ; and the taste has changed.

Last year there was a bit of a debacle with Mum and me over the Creme Eggs. In a huge oversight, Mum thought I was buying some for Easter and I thought Mum would be buying some. This assumption led to us ending up with none at all. After Easter we were too slow and we couldn’t find any. In fact we didn’t have any chocolate Easter Eggs at all last year. Not a one of any shape, or variety. So this year I am prepared – hence the above picture of a bowl brimming with Creme Eggs. Plus, I made double sure that we had some this year and just to make up for last year I bought two bags containing 4 eggs each. In some strange twist of fate, somehow this adds up to not 8, but 9!! I got a free one in the bag! This was a nice act of random kindness, probably generated by a machine, but still nice. Or perhaps I should say, Sweet! or egg-scellent!

Plus additional information from: