Autumn is Here: A Poetry Lesson

A few blogs ago we had a physics lesson (along with the Red Velvet Cupcakes), then we had an English language lesson (in the blog about Whoopie Pies), today we are going to study the English language again, but this time with a poetry lesson, deconstructing E.E. Cumming’s poem “l(a” written in 1958.

This poem, which I consider to be a very beautiful poem, construct-wise and visually, is seemingly simple, containing few words, and conveying what seems on the surface to be a simple message, yet underlying this is a complexity of multiple meanings. The poem is a paradox – simple yet complex.

Horizontally, the poem reads “a leaf falls loneliness” with ‘a leaf falls’ inserted into the word loneliness “l(a leaf falls)oneliness”. Written like this, as a sentence, these four words are evocative, almost like a haiku, but in the vertical form it is written in, a single lonely column of artfully divided consonants and vowels, it represents and becomes so much more than a single four word statement.

Rushworth Kidder described the poem as a “brief description of autumn”. E.E. Cummings was an American poet, and in America the season of Autumn is referred to as Fall. So the word ‘falls’ in the poem literally means a leaf falling, but the word can also reference the fact that leaves fall in the Autumn (or Fall).

The construct of the poem suggests the descent of a falling leaf, as the poem falls down the page. The parentheses also could represent the twisting and turning of the leaf as it falls, twisting in its descent one way then the other, shown by the ‘(‘ bracket symbol and the following ‘)’ bracket. The leaf can also be seen twisting and turning in the transposed letters of the lines ‘af’ and ‘fa’, the leaf flutters back forth on its way downwards. A single falling leaf is the universal symbol for loneliness. The basic adjective ‘a’, as an indefinite article, can be seen to represent singularity and therefore loneliness.  It is ‘a’, a single falling leaf, lonely, and alone. The poem looks fragile, almost like it could blow away on the breeze, like a leaf in autumn waiting for that final breeze to detach it from the tree.

Leaves have other symbolic meaning too. In the poem “Christabel”, by Samuel Taylor Coleridge, lines 48-52, are setting up suspense and the leaf is used as a symbol that something is about to fall.

There is not wind enough to twirl

Hanging so light, and hanging so high,

On the topmost twig that looks up at the sky.

In E.E. Cumming’s “l(a” poem, the word ‘one’ also stands alone, singled out from the word loneliness, and the second ‘l’ in loneliness stands all by itself, and with a multiple meaning because it looks like the number 1, which is a singular entity. The poem even looks lonely like a solitary figure, as the vertical arrangement gives the poem a shape of a 1.

The words are even fragmented, separate, lonely.

I love this poem by E.E. Cummings because he has deconstructed these four words and yet constructed so much more by rearranging the words in a visually stunning way, creating so many meanings and interpretations. This arrangement gives the poem a complexity of meaning that belies its simplicity.

These are my musings on the poem, but there are plenty more interpretations.

This poem is topical as the season is now Autumn and the leaves are falling, but the real reason why I mention this poem is because in Mum’s kitchen, on the fridge, I discovered a poem she had written out of fridge magnets and it looks very much like E.E. Cummings “l(a” poem. Mum is not familiar with E.E. Cummings works, but I was instantly reminded of the poem through the wording, the message and the visual arrangement.

Take a look at Mum’s work: 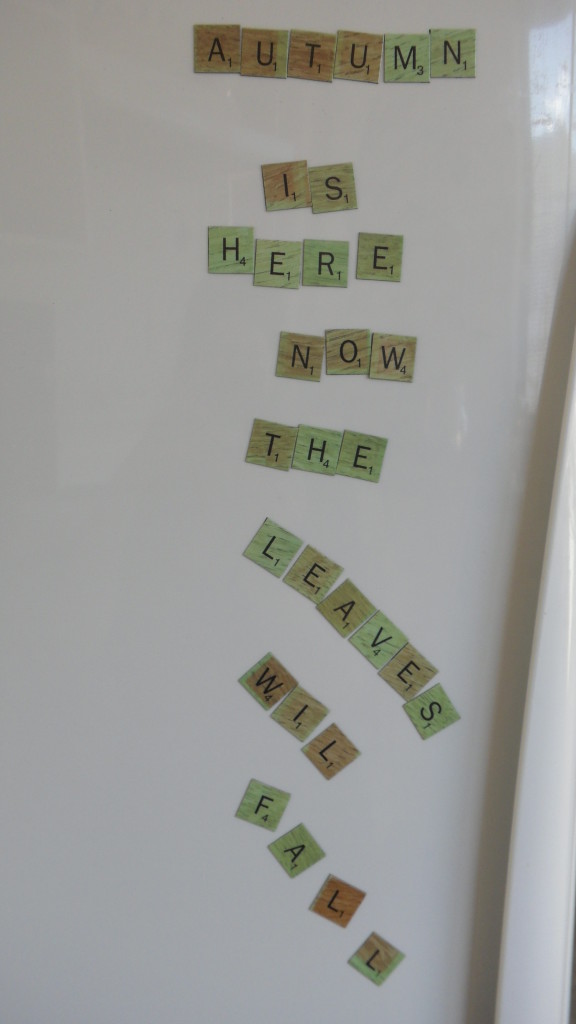 I think we have a poet in the house! Mum’s poem descends down the fridge like a falling leaf, just as E.E. Cummings poem does, but Mum’s words are arranged stylistically so they slant and tip as they fall. Mum overtly mentions Autumn, where as E.E. Cummings implies it. Mum is not consciously referencing E.E. Cummings, but certainly channelling him.

I must ask Mum what her intentions were with the meanings. In the case of the word ‘will’, spelt with only one ‘l’ (‘wil’), my interpretation is, in symbolism terms, maybe the ‘l’ fell in sympathy with the leaves falling. In which case, that is a very nice piece of literary convention and is known by the literary term, pathetic fallacy. (I may be reading too much into the meanings here, it may be that there weren’t enough ‘l’s provided with the set of magnets to make up the full word ‘will’.) Whatever the reason, it is a nice use of a literary device, to take the word beyond its literal meaning and appeal to the senses and feelings. (See below for an explanation of pathetic fallacy.) Afterall, that is the beauty of poetry – to impart not only a message, but to evoke feelings in the reader through specially chosen words, such as combinations of words, word order, memorable phrases, and the sound effects contained within certain words and sound effects of words strung together. Employing these literary devices means a personal relationship between the poem and the reader develops, thereby the reading of a poem becomes a very personal transaction. Ezra Pound came up with three qualities of good poetry, the gist of which was that poetry uses words for more than their direct meaning. Words and groups of words are employed for aesthetic qualities to produce emotions. One of the three terms is called logopaeia, which Pound summed up nicely as “a dance of intelligence between words and ideas”. Lovely!

PS: if you like E.E. Cumming’s visual arrangement of “l(a” take a look at his grasshopper poem. Grasshoppers hop about, and so does his word arrangement, just try following the hop hop hops of the grasshopper! I remember briefly studying this poem in my first year at university  and getting incredibly frustrated trying to work out the grasshoppers leaps to put the poem together. You will know what I mean when you go to read it.

To show how pathetic fallacy is used, an example can be found in chapter 9 of Wuthering Heights. (I love a good excuse to talk about Wuthering Heights, and to slip in a mention of my favourite author, Emily Bronte). In the chapter Cathy is talking to Nelly, but Heathcliff overhears Cathy saying that it would degrade her to marry him. In anger, he leaves Wuthering Heights for three years – (no-one knows for sure the details of where he goes or what he gets up to in this time). A thunderstorm follows Healthcliff’s departure and the ‘growling thunder‘ makes the storm seem angry about Heathcliff leaving, and the storm also coincides with Cathy’s dark emotional turmoil. The storm breaks and then the rain begins to fall while Cathy is crying in anguish. This is a lovely piece of extended pathetic fallacy.

I used another example of pathetic fallacy earlier in this article:

Which gives human feelings and emotions to nature. Pathetic fallacy is similar to personification.

And there endeth the lesson.

My other favourite poems:

E.E. Cumming’s poem l(a joins a handful of poems at the top of my favourite poems list, of which I could never choose an outright favourite. Among these poems are Keats’ Odes; Allen Curnow’s “The Skeleton of the Great Moa in the Canterbury Museum, Christchurch” and “Landfall in Unknown Seas”; Edward Thomas’s “Words”; Emily Bronte’s “The Bluebell”; Sarah Fyge Egerton’s “The Liberty” and “The Emulation”; Wilfred Owen’s “Anthem For Doomed Youth”. These poems are on my list for many reasons, including sentimental reasons, and because I like the way the poets have used certain words for emotive effect.

Here is my artistic version of E.E. Cumming’s “l(a” poem: 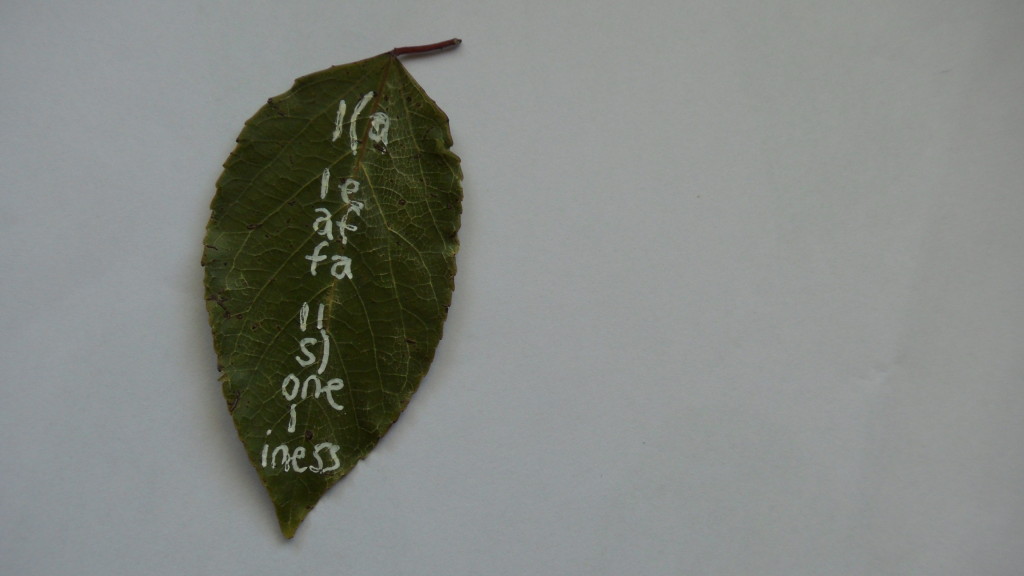 In my photograph the poem is written on a single leaf that sits where it fell, alone in a wide, wide expanse of loneliness. Therefore, the poem is encapsulated within a photographic representation of the poem.

Here are two examples of the poem which I wrote on leaves I found lying in the garden: 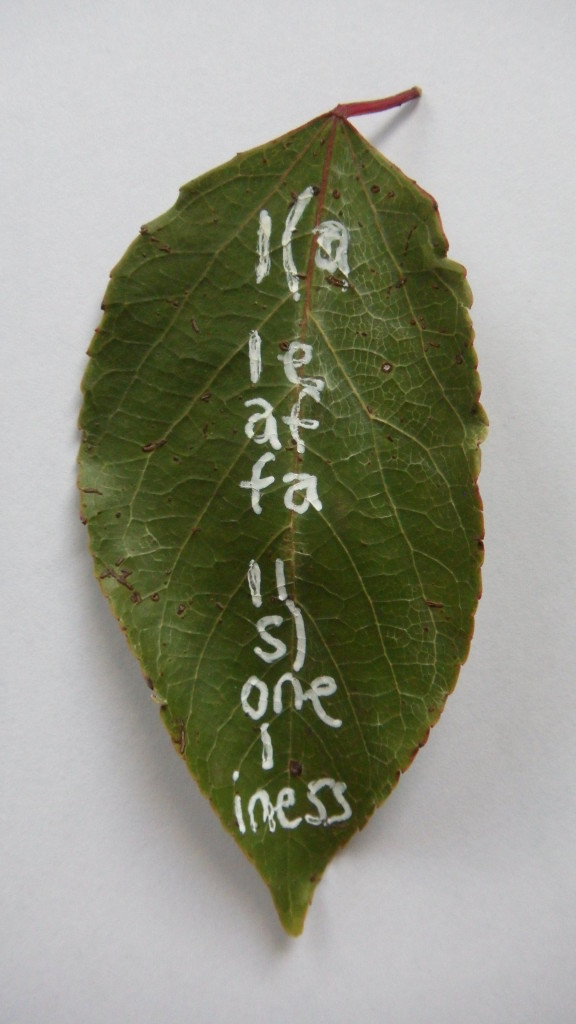 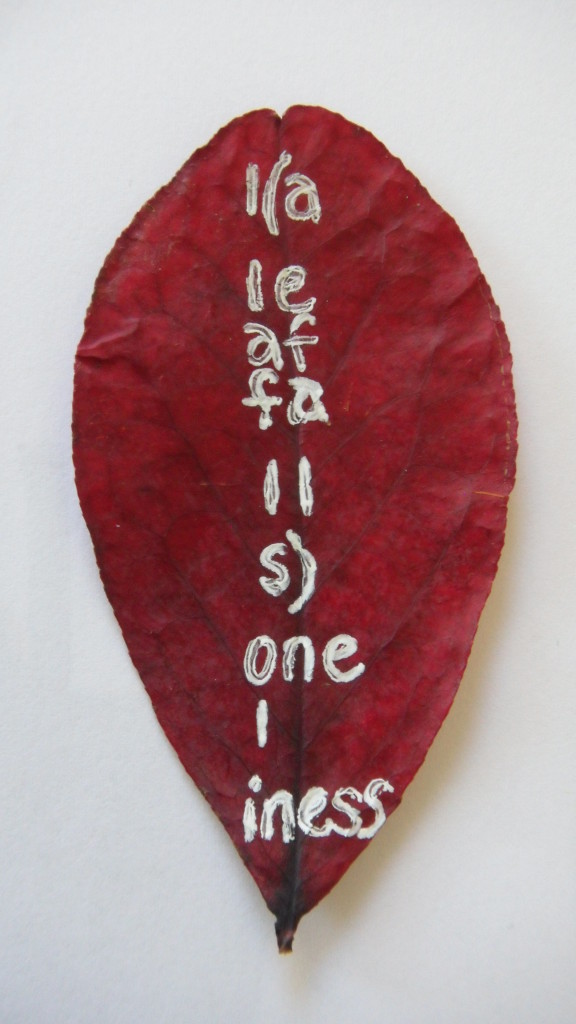