Morning Teas for the Painters

For the past couple of weeks Mum and her neighbour (T) have had a crew of painters painting the roof and the outside of their houses. Mum and T have been providing home-baked goods for the painters morning teas. I was introduced to the painters – “Chunks” and his Crew – last time I visited (I have no idea about the origins of this nickname, but I was tempted to ask). They seat themselves in a sheltered area and have a kettle boiled for them so they can make hot drinks and then a tray of baked goods is brought to them. So far Mum has made cheese scones, sweet muffins, savoury muffins, maple syrup cranberry and coconut cookies, cut up fresh fruit, rhubarb cake (they had this for several days in a row), and something special – Red Velvet Cupcakes. With so many foods on offer, Mum may as well hand them a menu, entitled Mum’s Cafe’ when they arrive at 7.30 in the morning. They can tick a box with their morning tea choices, and Mum can set about baking. I might get a pair of overalls and hang out with painters at about 10 O’clock in the morning and see what goodies I can scrounge.

A note about the Red Velvet Cupcakes: Mum and I made them, but couldn’t eat them all, so thought the painters might like them for their morning tea (see a previous post for the recipe). We debated whether to give them to the painters or not as we weren’t sure how the cupcakes would be received since it was very close to Valentine’s Day and the cake was red in colour with white cream cheese icing with red heart sprinkles on the top. I don’t know what “Chunks” and his crew thought of that!! 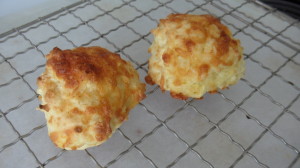 Cheese Scones – this is all that was left, after the painters had been and I was lucky to get just one. These scones are called ‘drop scones’ and the recipe came from Grandma (Mum’s mum) who was given the recipe in the 1950s from a golfing buddy. On the day of the Cheese Scone morning tea, the painters had their morning tea, then decided they would call it quits for the day. I bet they waited till after morning tea time to make that decision to see what food goodies were on offer, and I don’t blame them for that! The reality was that the weather was too wet to do any painting outside and they had indoors painting they could get on with elsewhere. The job the painters did was very neat and tidy, not a stray paint drip to be seen anywhere. They are a crew to be recommended.