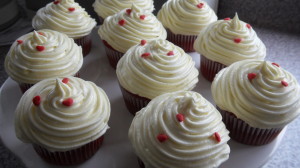 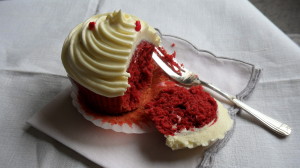 These cupcakes have a nice cake consistency moist yet spongey. Because the cake was red and the icing was white with red hearts sprinkled on top, Mum and I made these for Valentines Day. Anything Red Velvet, be it cupcakes, cakes, or whoopie pies seems to have become very popular lately. I have been wanting to make Red Velvet Cupcakes for such a long time, but the thought of the red food colouring has put me off a bit. Indulging in the red food colouring once in a while is ok, so I have been waiting to find a special recipe that looks like it will make Red Velvet Cupcakes like in my local cafe Tomato. This recipe seemed to fit the bill. Since then….Tomato Cafe offered me their special recipe! I am so thrilled about this, so look out for a future article when I have made them. I thought it would be nice, in the interest of sharing, to offer Tomato a recipe in return, so I gave them the Spinach and Cream Cheese Muffin recipe (see my previous article for the recipe).

A few pointers about this Red Velvet Cupcakes recipe:

½ cup (125 ml) buttermilk, at room temperature (you can make your own: see below)

Whisk the sugar and oil with a handheld electric mixer until combined well. Add the egg and beat well after each addition. Add the cocoa paste and mix well, scraping down the sides to ensure an even mixture.

Finally (don’t forget this step!), mix together the baking soda and vinegar (it will foam). Add to the cake batter and beat on medium speed for 10 seconds. Make sure you scrape down the bowl to ensure everything is well mixed.

Divide the mixture between the cases, filling to at least two-thirds full.

Bake in the middle of the oven for 20-25 minutes or until a skewer inserted into the centre of the cupcakes comes out clean.

Cool in the tray for 10-15 minutes before transferring to a wire cooling rack to cool completely.

When cool, top with the vanilla cream cheese icing and decorate with red fondant hearts.

These cupcakes will keep for 3 days in an airtight container at room temperature. 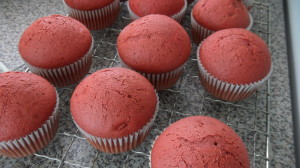 The cupcakes baked evenly and all were rounded on the top.

TO ICE AND DECORATE:

This icing will keep for up to a week in an airtight container in the fridge.

Pour milk into a jug and remove 1 ½ tspns of milk. Add the vinegar or lemon juice and stir. Leave to sit for a few minutes before using.

Look out for this book: Bluebell’s Cakery by Karla Goodwin. Throughout the book are lovely recipes plus instructions on how to hand-ice cakes and cupcakes, make biscuits, slices, a chapter with ideas for high-tea, desserts, jams and more. The book has a vintage theme to it and I love looking through this book and looking at the pictures. I am in awe of the beautifully decorated edible goodies. I had to buy the book because I couldn’t put it down, and Mum and I are sharing it. I have so many favourite pictures in this book, but my ultimate favourite is the multi-layered Vanilla Rainbow Cake, a cake so glorious it has layers of cake with graduations in colour from two layers of pink cake to two layers of peach then two layers of lemon, plus icing between each layer of cake, and rosette icing on the outside matching the colour of the cake inside. It has to be seen and drooled over. And look at the magnificent cake on the cover of the book with its ruffle icing. 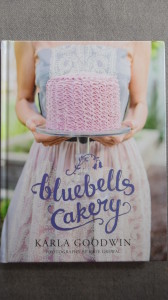