Peach Melba (and variations on a theme)

The Peach Melba was created for the Australian opera singer Dame Nellie Melba in the 1890s by French chef Auguste Escoffier, at the Savoy Hotel in London. His first version of what became the Peach Melba was fresh peaches and vanilla icecream (including a swan carved out of ice). Several years later he changed this (which is a great relief because I don’t feel like carving a swan out of ice) and the Peach Melba became a poached peach with raspberry sauce and vanilla icecream.

In the tradition of chefs that change their recipes….Mum and I made a variation on the Peach Melba theme – we served our poached peach with raspberry jam (instead of raspberry sauce) and whipped cream with vanilla extract (instead of vanilla icecream)…and no swans. 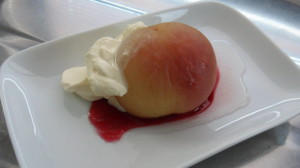 Our variation of a Peach Melba, sans swans.

The peaches we used were the ‘Yumyeong’ variety. They came from a friend of a friend of Mum’s, who had picked them less than 2 days previously, so they were nice and fresh and organic. Mum’s friends had been given the peaches too and Mum said she was going to poach hers. Her friends must have pondered this and thought this was a good idea too as Mum received phone calls requiring her advice on how to poach the peaches. Here is what Mum did:

We used 4 peaches. Wash peaches and place them whole, with the skins on into a pot.

Cover them with a sugar syrup. (To make enough syrup to cover 4 peaches in the size of pot we used Mum made a sugar syrup of 2 cups of water and 1 cup of sugar.)

The sugar syrup can be adjusted to requirements by using the general measurements for making sugar syrup with the ratio of ½ (sugar) to 1 (water). This ratio makes a medium general purpose sugar syrup perfect for poaching fruit.

Place the pot containing the peaches on an element on a low heat setting. When the syrup begins to simmer, set a timer for 20 minutes (a bit longer than this doesn’t hurt but the peach skins will be more wrinkly).

The peaches will float, so during the simmering process, turn peaches over so they get an equal amount of time simmering in the syrup.

The peaches in the warming sugar syrup, before it gets to a simmer : 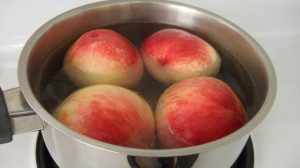 After 20 minutes simmering, remove from the heat and leave the peaches in the pot until they are warm. Remove from the sugar syrup and carefully drain, being careful not to damage the soft skin. The poached peaches are best served warm. Add raspberry jam or raspberry sauce and whipped cream with vanilla extract or vanilla icecream. The peaches will have a soft jelly-like flesh which breaks away from the stone in the peach easily and the outer skin is soft with a rosy glow.