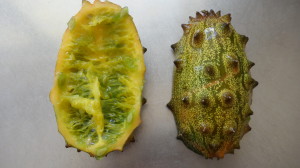 We had scooped out most of the pulp here, but some of the seeds encased in a green gel are still visible.

This is an odd beast. On a whim a friend and I bought one for $3.99 (NZ dollars) at the supermarket (actually, he had it in the trolley before I had come to a conclusion as to whether it was a fruit or a vegetable). I wasn’t sure what to make of it. I thought it looked more like a creature from the sea, such as a seaslug and certainly, if you saw it in a rockpool at the edge of the ocean it would not look out of place. A Sea Cucumber is what my friend thought it looked like, and after googling images of Sea Cucumbers, yes, I must admit that it does look very similar. What do we do with it? We had never tried a Kiwano before.

The Kiwano we tried had a skin with a khaki green base with yellow mottled spots, there was also patches of orange skin base with yellow mottling. Sticking out from the skin are raised hard lumps with sharp points on the ends. If you came across this out in nature somewhere, surely the bright colours and the markings on the skin, along with the strange bumps on the skin would act as warning signals to keep away, it may be poisonous. What reiterated this was the bright green colour of the pulp inside. When we cut open the Kiwano a green goo oozed out. It was like something from the movie Alien. Inside the Kiwano are many seeds that look like cucumber seeds, and each one is encased in its own little green slimy gel enclosure.

We weren’t sure how to eat this thing, so we decided to scoop out the contents and juice everything – the green pulp which surrounded the seeds, and the seeds themselves. The resulting juice was bright green, the colour of Kiwifruit juice. The smell was like a green banana. The taste was like green banana mixed with lemon juice with a hint of cucumber.

After we had cut the Kiwano open and juiced it, I did a google search and found that it is also known as a Horned Melon that is native to the Kalahari Desert region of Africa. I also see that the Kiwano is ripe when it is predominantly orange, whereas ours still had green, so ours may not have been properly ripe.