Edible Plants in Mum’s Garden and in My Garden

One of the lettuce varieties is called ‘Drunken Woman’. The leaf is bright green and the edges are frilly with a pretty pink and bronze coloured tinge to the tips. The leaf is soft and bruises easily. They are a nice tasting lettuce that can be harvested whole or one leaf at a time. The plant label said it was slow to bolt, but with the climate being different this year – a hot early summer – Mum’s lettuce bolted after just four weeks, and put out seed stalks. (I was given this variety last year by a friend, and my lettuces lasted longer because I live in a cooler climate.)

Mum also has a lettuce variety called ‘Grizelda’ which has a long spiky leaf.

The yellow pepper is called ‘Greek Golden’ and was bought from the Hawke’s Bay Farmers’ Market.

I have a large variety of chilli seeds to choose from, and Mum chose three varieties to grow. The varieties Mum chose were the Hungarian Yellow Wax, Orange Habanero, and Serrano Chillis. The seeds were planted in the last week of November – this is very late Spring, and almost into Summer, which is a bit later than they should be planted, but in the hot climate where she is, they should have ideal conditions. Mum planted the Hungarian Yellow Wax chilli last year too and it is a very versatile chilli which can grow large like a pepper and is lovely to add to stir-frys.

I gave Mum some Edamame Beans as an experiment. See an earlier post on cooking these Edamame Beans http://inthekitchenwithmum.wordpress.com/2014/01/08/edamame-beans-and-how-to-cook-them-in-pods/

Mum has had several harvests from her potatoes. They have been such a great success that next year she will be planting a larger crop. There is nothing like freshly dug potatoes, boiled with mint and served with melting butter.

My friend and I have a really small garden where just about everything is in pots. But we have a huge range of plants, most that eventually will grow into large trees!

There is a theme that has surfaced of ‘Edible Plants from South America’. This is totally unplanned. They are: Guava, Chilean Guava (NZ Cranberry), Mountain Pawpaw, Maqui Berries (also known as Chilean Wineberry, native to Chile and Argentina), Cape Gooseberry (native to Peru), passionfruit, and Feijoas. The Feijoa variety Bambina, is a dwarf variety, as we wanted feijoas, but because they grow rapidly, we didn’t want a huge tree just yet. Their first fruiting season was last year, and I initially wasn’t too pleased with them. We only got to harvest about three small feijoas off two plants. But this year there are flowers covering the small plants, so we are hoping for better production this year, and it looks favourable.

Last year we tried growing Pepino plants, which are also from South America, but we did not plant them again this year as they attracted rodents.

Caught in action! Here is the pesky little vermin hanging upside down to eat the Pepino fruit. 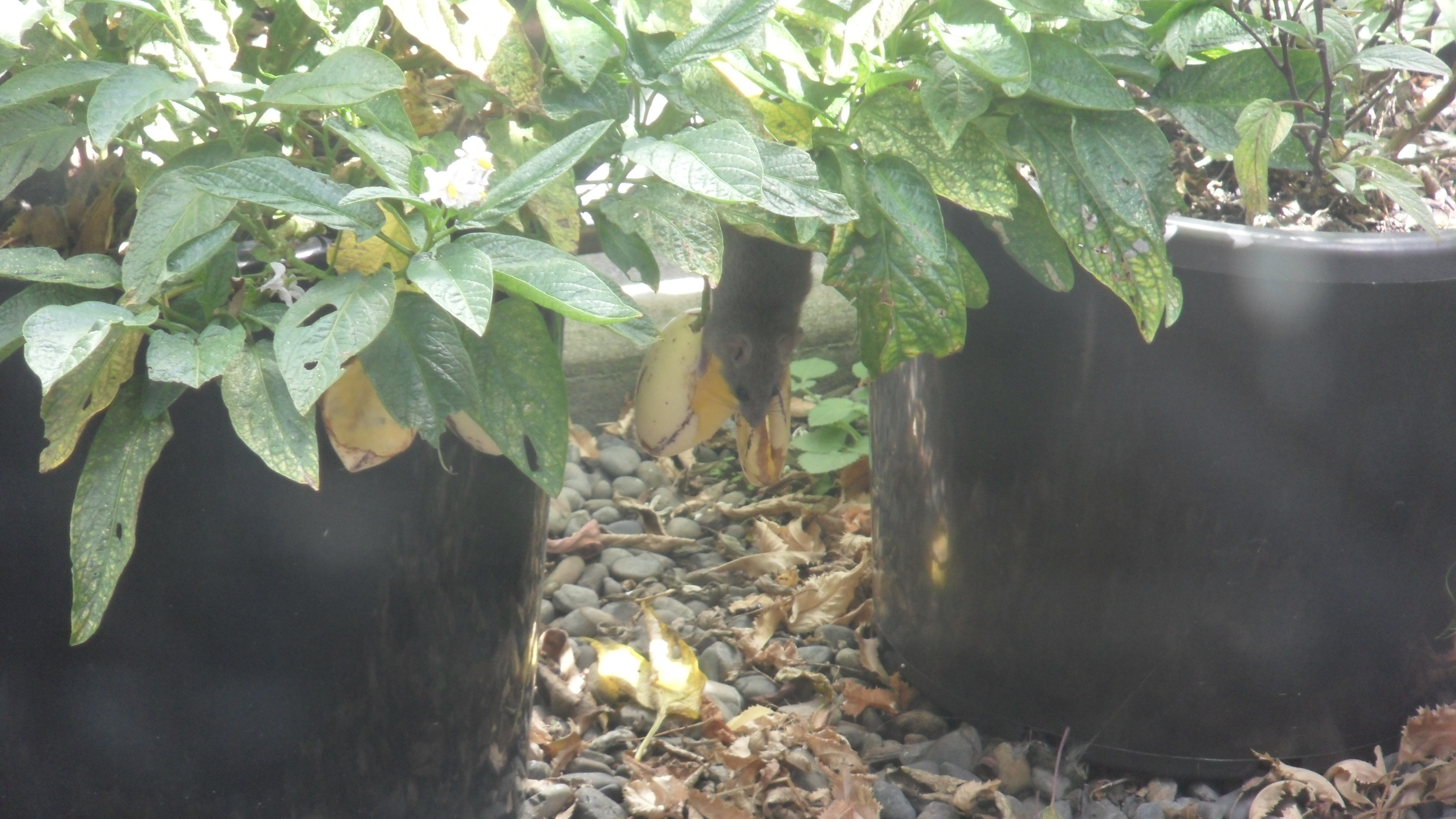 The birds normally get all the blueberries, even though we do our best to cover them in netting. No matter what we do the berries still keep dissapearing. The same story happens to the currants, and strawberries. We just got in before the birds to get the maqui berries – see my earlier post on juicing the maqui berries at http://inthekitchenwithmum.wordpress.com/2013/12/14/maqui-berries/

The above plants all live alongside smaller plants such as:

And then there’s THE chilli plant – the ‘Butch T Trinidad Scorpion’ the hottest chilli in the world (at the moment). This is an annual plant, but we kept it over winter to see if we could get another year out of it. In spring, small leaves were produced from the branches, but they were stunted. I chopped back some of the old wood to see if this encouraged new leaf growth, but unfortunately it didn’t. I may have left it too late in the season to experiment with pruning it.

Out of everything in the garden, the most useful has been the perpetual spinach. This comes in handy all the time, as extra greens to go with a meal either wilted in boiling water, fresh in salads, or thrown into a stir-fry near the end of cooking. Plus, some of the bagged small spinach leaves in the supermarkets have been washed in chemicals, so I would rather grow my own.

Some of these items are grown because it is cheaper to grow them than buy them in the supermarket, but others, such as the artichoke, the edamame beans and the maqui berries (and many of the other fruiting trees) are experiments.