Edamame Beans, (and how to cook them in pods)

I bought these plants at the Hawke’s Bay Farmers’ Market in late October. I was thrilled to find them as I had been wanting to try growing them for sometime, but hadn’t been able to get them anywhere. http://www.hawkesbayfarmersmarket.co.nz/ In a previous blog “Spring Farmers’ Market” I mentioned buying the Edamame bean plants and the instructions I received on how they grow.

I think they were from Links Organics http://www.marketground.co.nz/linksorganics/ Their stall at the Farmers’ Market was filled with a large supply of very healthy looking plants, and many different varieties.

These are the size of the plants when I first bought them : 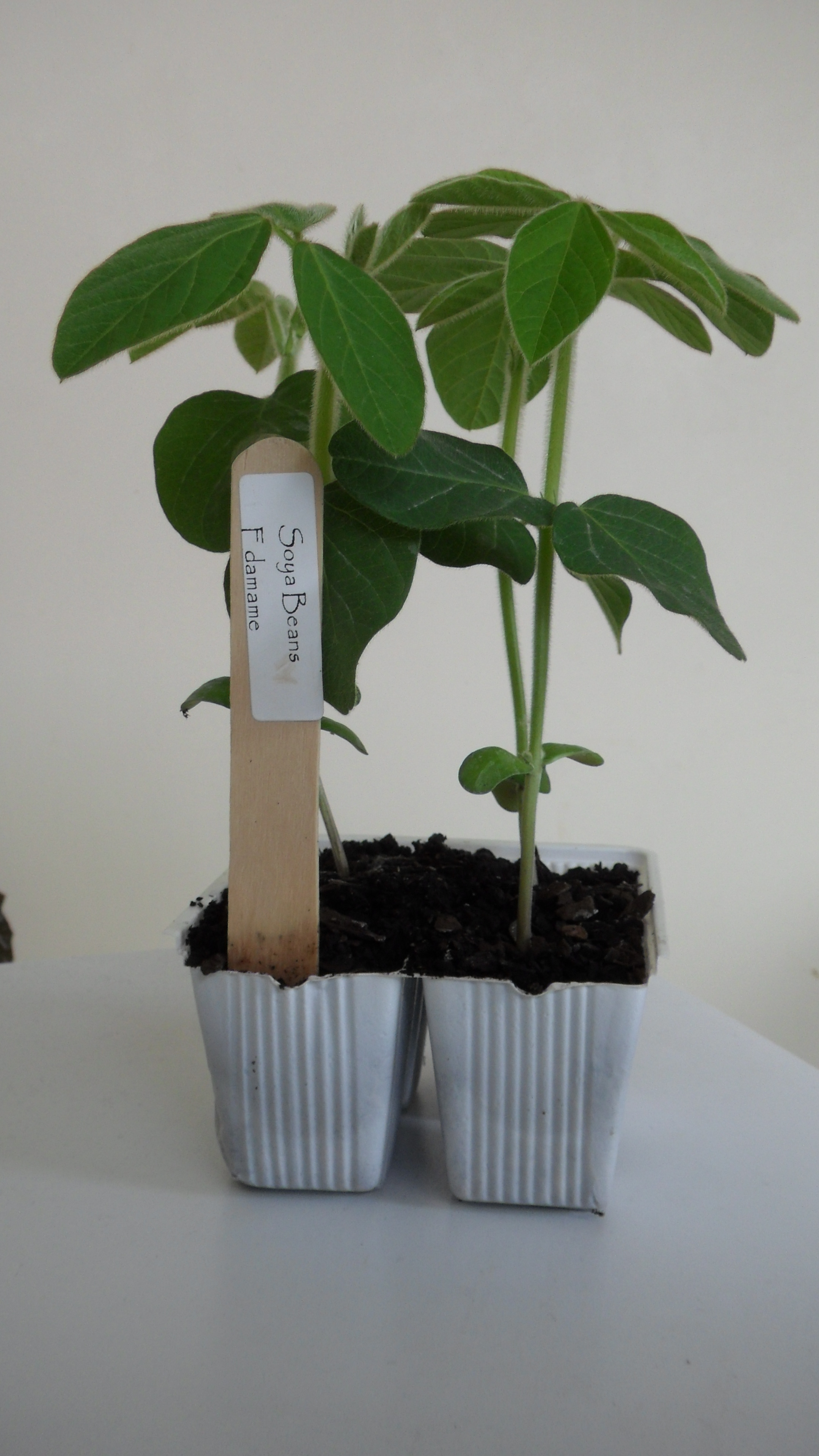 I gave two plants to Mum and I took the remaining four home. The plants I gave to Mum stayed in the same climate they had been raised in, whereas the plants I took home went to a cooler climate than what they were raised in.

In another blog “Interlude” I predicted that “The experiment is to see how easy they are to grow, what they turn out like, and also to see what a distance of approximately 160 kilometers between us [Mum and me] does to affect their growth rate. I’m betting that Mum will have beans before I do as she lives in a warmer climate.” Well, (I have to say it), it turns out that my prediction was right. Mum’s plants are more advanced than mine. My plants are still struggling along in their cooler climate, lagging in development several weeks behind her plants.

I first noticed beans forming on my plants around the 14th of December, but they were developed enough to have been there a week earlier. I couldn’t believe my eyes when I saw the beans on the plants and had to look again. I was surprised to see the pods because there didn’t seem to be any flowers before the beans developed. Also, the plants had spindly stems and were small, I was expecting the plants to be bushier and taller before they produced beans. By this stage, Mum’s plants had beans too, hers have been quicker to develop into proper pods than mine. Also, Mum’s plants are more bean than leaf, and mine are more leaf than bean! We have harvested edamame beans off Mum’s plants (a small harvest, but a harvest nonetheless), on the 2nd January.

My brother and I enjoy boiled and salted edamame bean pods at our favourite Japanese restaurant, Yeda, so I was extremely pleased that we could harvest the beans when he was visiting Mum at the same time I was – all the timings came together very nicely.

Here is one of Mum’s edamame plants showing the beans just before harvesting. The edamame plant is next to a potato plant and it was difficult to tell the leaves apart. The edamame bean leaf looks like the potato leaf, but not as shiny. 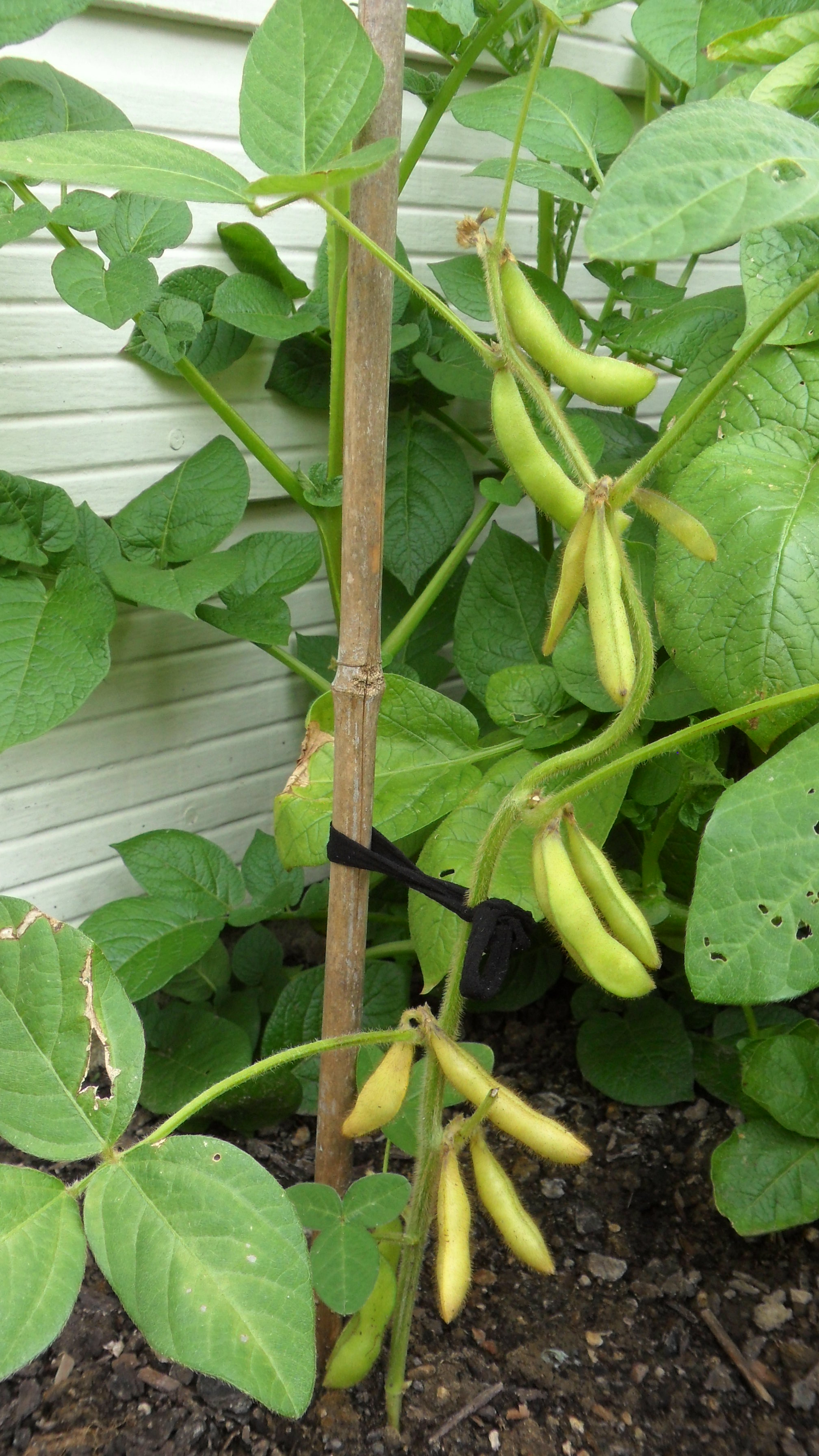 Here are the edamame beans, and a close up look at the hair on the outside of the inedible pod : 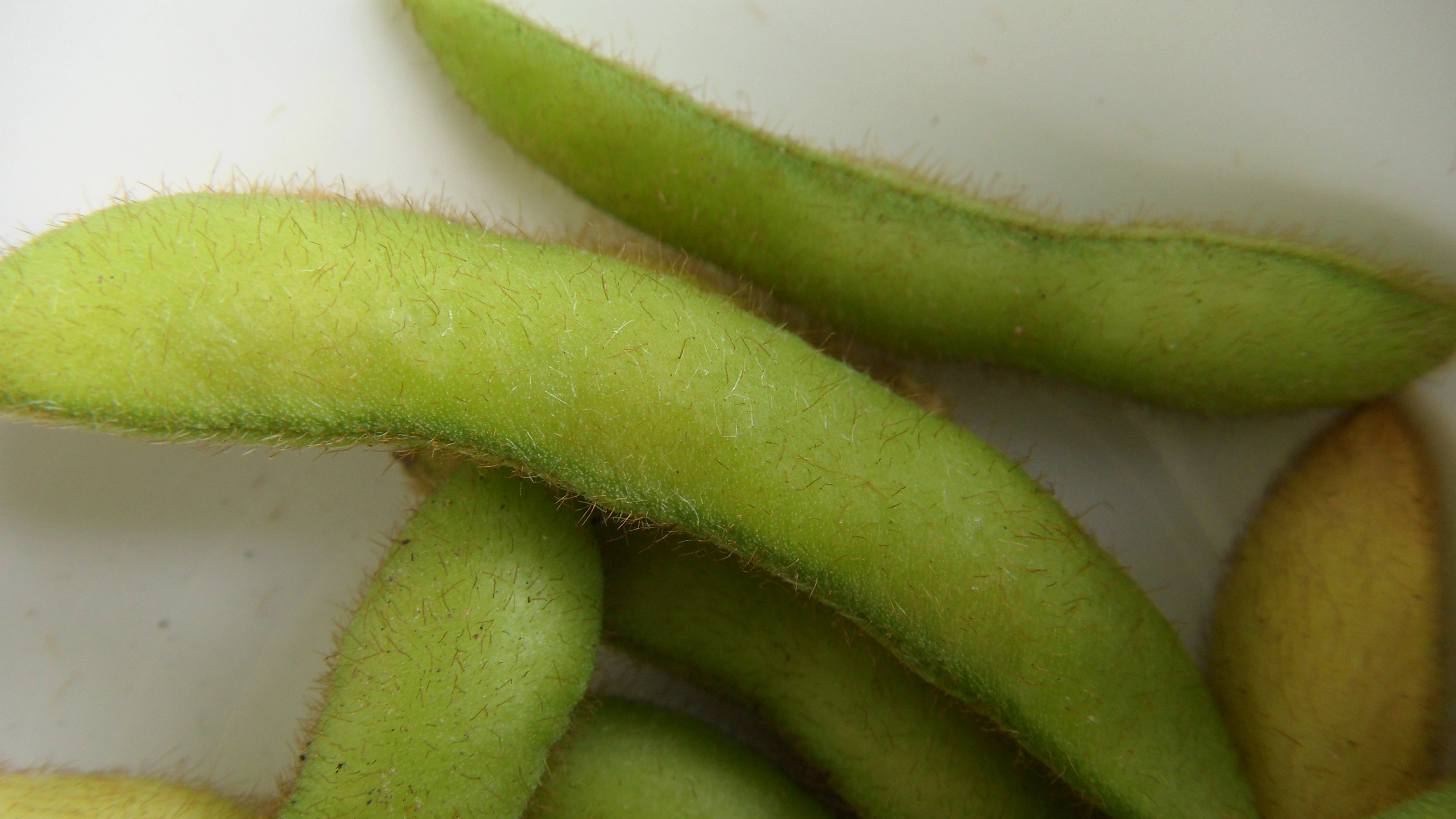 Edamame beans are now starting to appear in supermarket freezers either shelled or still in their pods.

Edamame beans are young, green soybeans. They are harvested before the soybean reaches full maturity. When mature, the beans are used to make tofu and other soy products. Edamame beans are high in protein, and they are a plant source of fibre and iron. The peak season for the beans is summer through to early autumn.

Cut the stalks off the pods. Then drop the whole bean pods into a boiling pot of water with lots of salt added. The water should taste as salty as seawater. I used 1 teaspoon of salt in a medium pot of water. Cook until the beans inside the pods are tender, which is about 4-5 minutes. When cooked, drain the water and rinse the beans (with cold water to cool if needed, but they are nicer if they retain their heat from cooking). Place beans on a dish in their pods and sprinkle with coarse sea-salt. The pods are inedible, so remove the beans with teeth or fingers.

I read some recipes where the beans are rubbed with salt before they are cooked. I’m not quite sure why this is, maybe the salt removes some of the hair off the outside of the bean pod, or maybe it’s just to make them taste saltier. We didn’t do this step.

The cooked pods sprinked with salt, ready to eat : 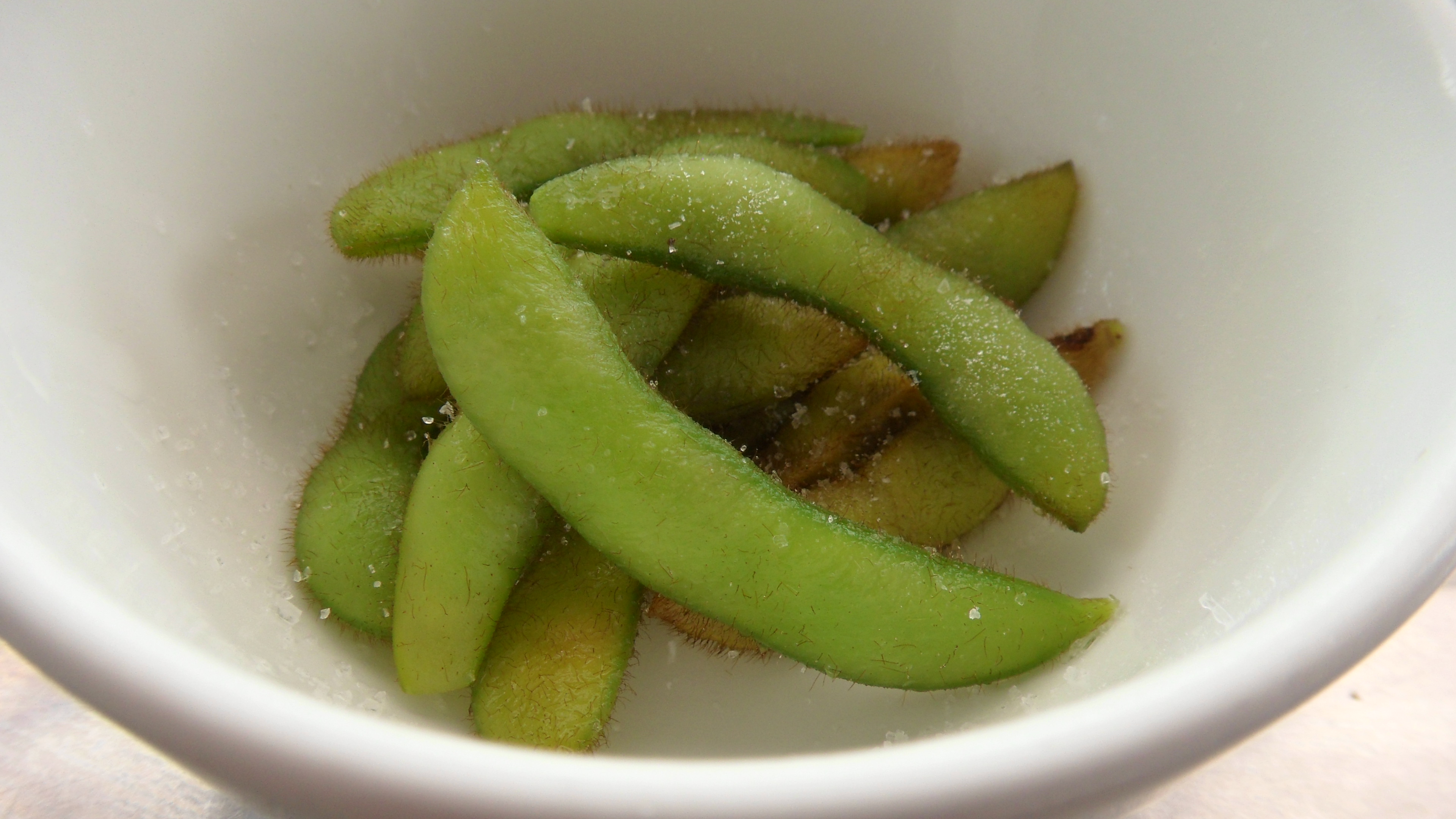