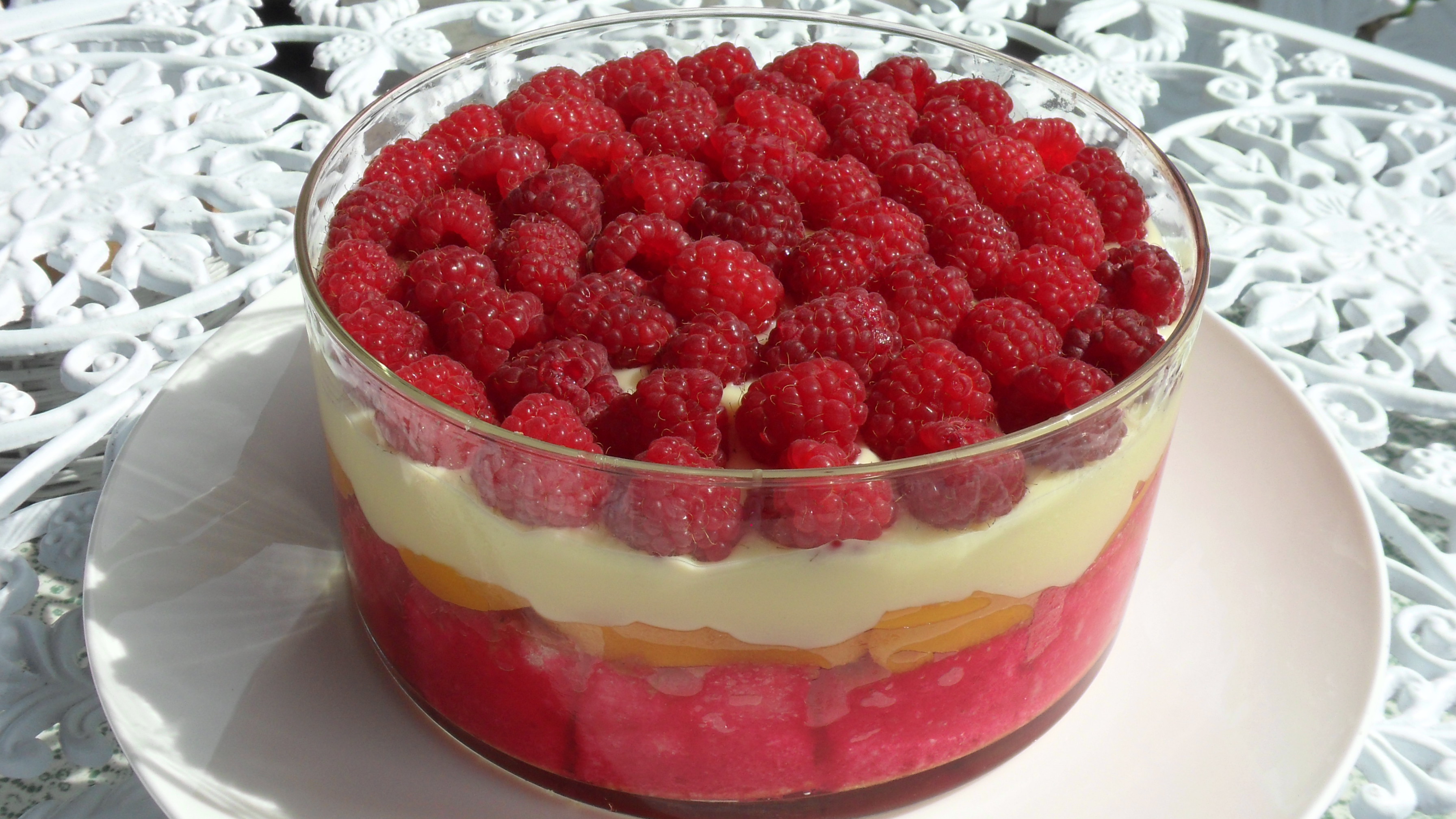 On Christmas Day morning Mum and I prepared “The 2013 Trifle”.

(made with ¾ cup less water than the directions stated, so it is not so watery)

Mum had been up and about early in the morning and made the jelly.

We then cut the sponge into squares, which is when I just about cut Mum’s finger with the knife as she was holding the sponge together while I cut it (I don’t think we had even started on the bubbly at that stage).

We arranged the jam covered squares of sponge in a clear straight sided bowl until the base was covered. Then poured raspberry jelly over the sponge until the sponge was all pink and no white patches were visible on the sponge, then we topped it up with a bit of extra jelly. We had some left over in the jug, so we made little jellies to have for desserts later in the week.

We refrigerated the trifle so the jelly could set.

There are no rules when it comes to putting together the trife. I think we put the same layers together each year, but it can vary. The only rule that we have is that there has to be enough trifle left over for breakfast on Boxing Day, as is the tradition that we enjoy. 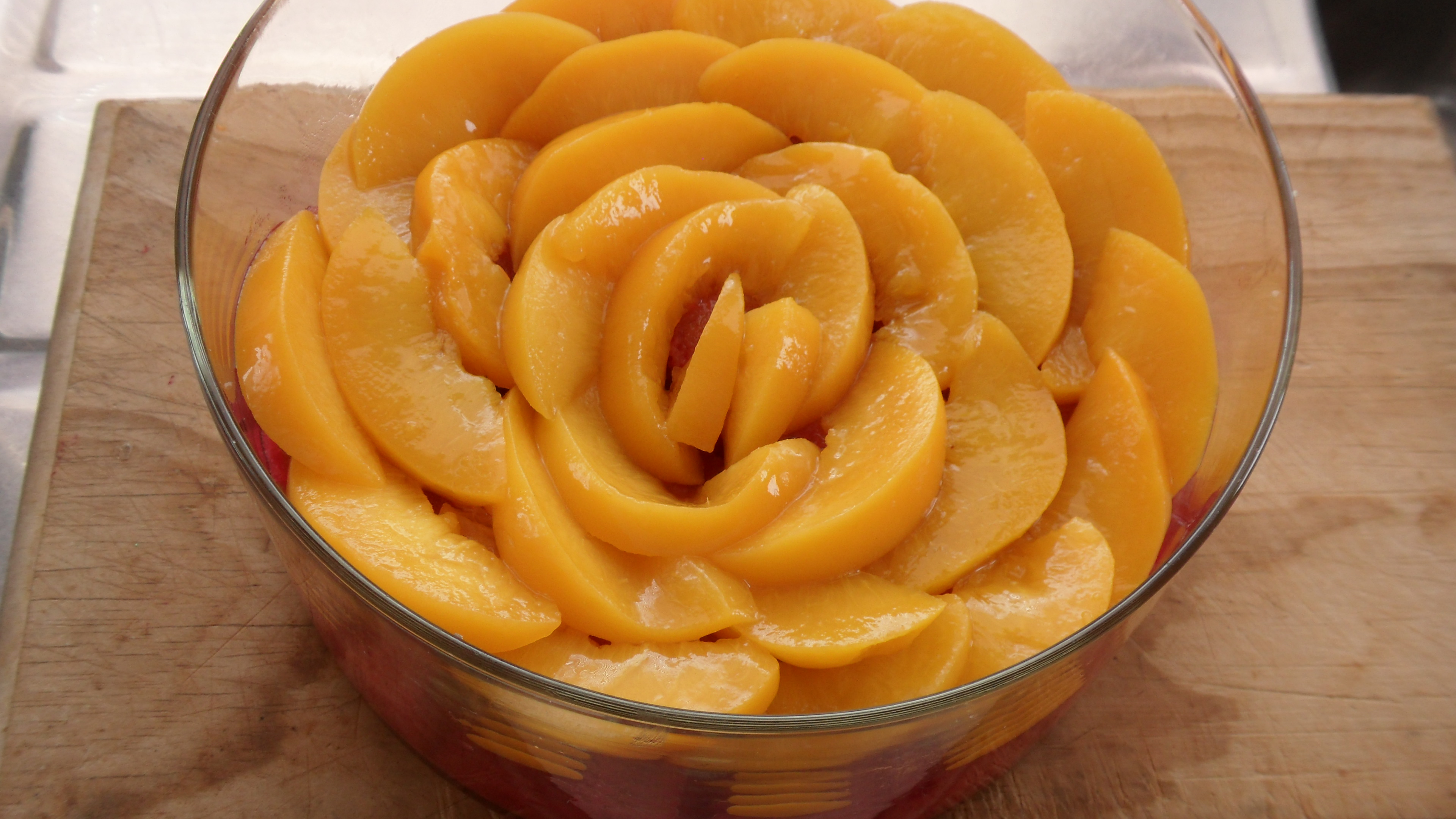 Peaches – arranged beautifully by Mum even though no-one will see them under the other layers.

Then a layer of custard, then raspberries arranged to cover the custard. We had picked the respberries the day before, so they were lovely and fresh. (We got up early and were in a long line of people from 6.20 in the morning waiting for the Ruby Glen berry farm to open at 7am, but this seems to be what local people do the day before Christmas. The things we do!)

This year, because the raspberries looked so lovely and fresh and bright, we decided to leave the trifle with the raspberries showing on the top. Usually we would then add a layer of whipped cream, sprinkled with chopped walnuts and grated chocolate. It seemed such a shame to hide them under the cream, so we added this later when the trifle was in our plates.

We were under the influence of having a glass of bubbly for Christmas morning and had been experimenting with adding different flavours to the bubbly – raspberries, then passionfruit syrup, then apricot puree to make ‘Ambrosia’ (champagne + apricot nectar = Ambrosia).  The bubbly was a Lindauer Sauvignon Blanc and it was really really nice. So overall I think the trifle turned out great.

I have to show a photo of the Lindauer bottle because it was one I would definitely buy again. It is produced from Marlborough Sauvignon Blanc grapes. I like the warning on the back of the bottle. When removing the cork “ keep pointed away from yourself and others”

And yes, we did have trifle for Boxing Day breakfast, and the breakfast the day after. Unfortunatley my brother and his girlfriend weren’t there for the Boxing Day tradition, but Mum’s sister was.

The following photo is of “The 2012 Trifle”, for comparison to this years trifle.  The photo was taken on Christmas Day, 2012. 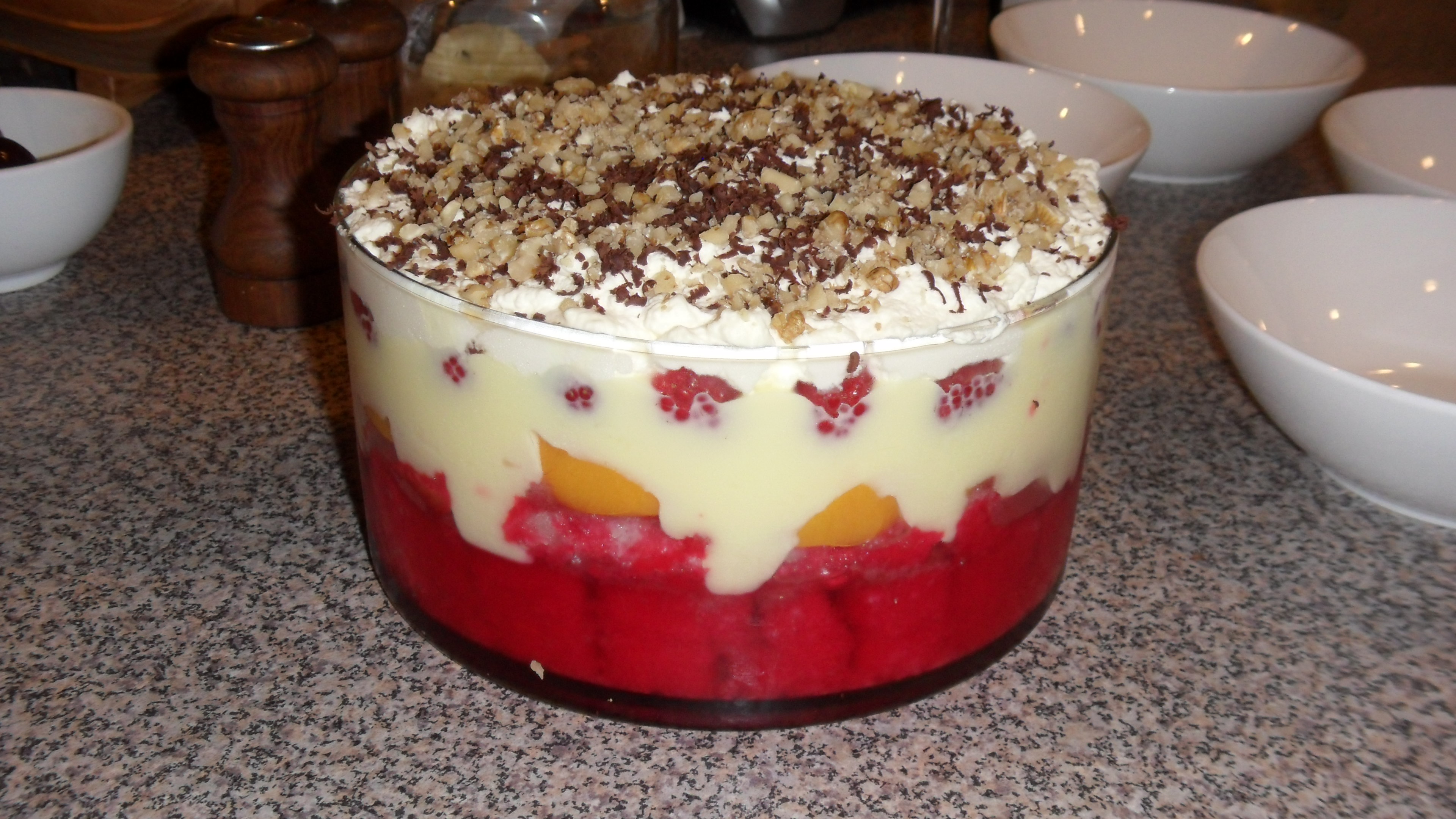