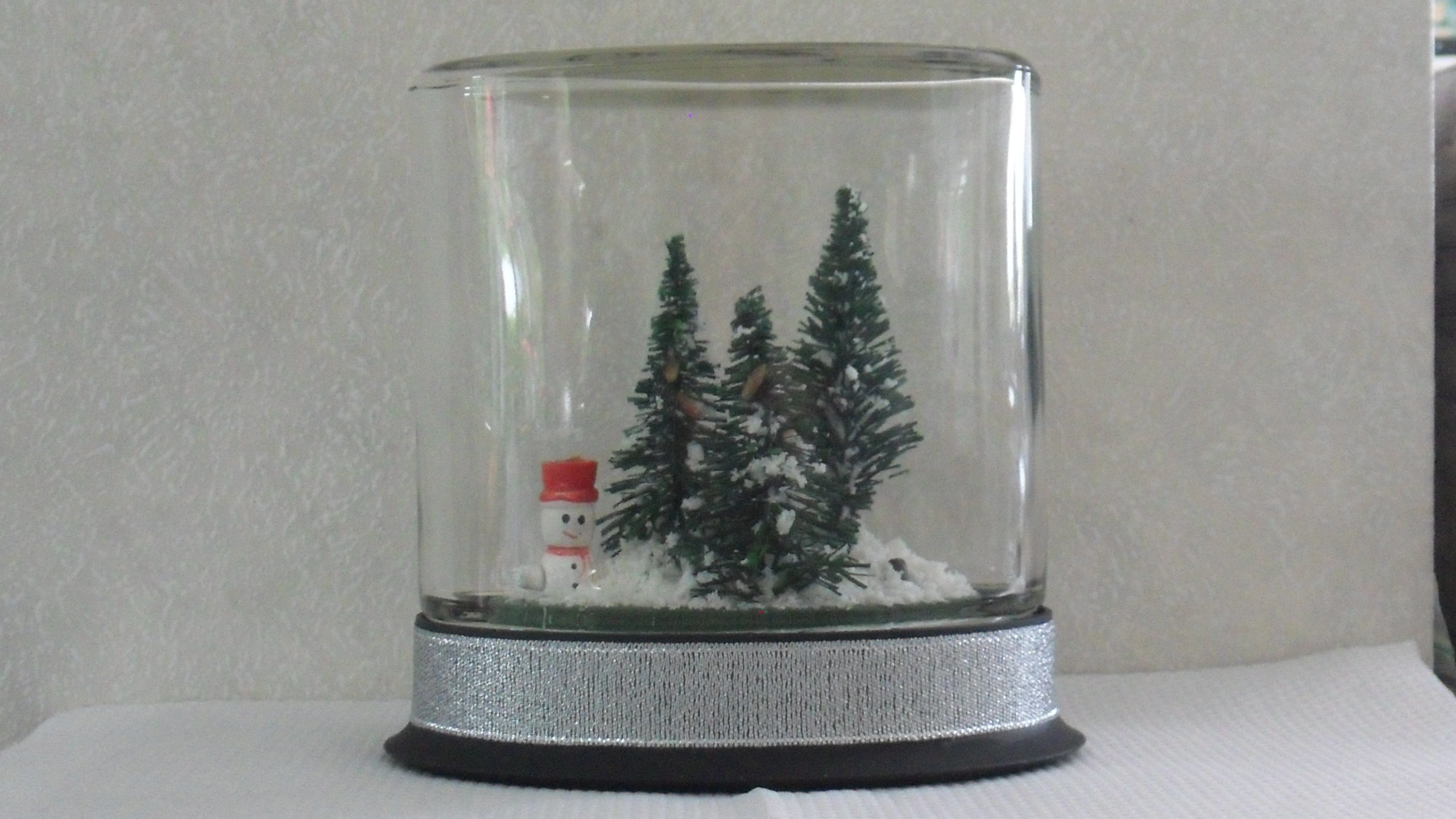 This is a snow globe, but without the water. I had seen this idea in the book Australian Women’s Weekly Christmas Cooking (AWW), published in 2013. I had several months in which to make it before Christmas, but had trouble locating suitable jars and small realistic looking pine trees. Mum solved the jar problem by finding a great jar with a rubber seal lid in a second-hand shop for $1.00.  A friend solved the problem of finding the small trees. I had searched every shop I could think of that has Christmas decorations in the hope of finding small trees, but this year tree shaped decorations of any sort were not available. Whereas, my friend went straight to a model train shop and found the best ever miniature pine trees, they are very realistic and even have small pinecones attached. I was very impressed.

When I visited Mum just before Christmas, we sat down and constructed the snow scene. Mum had pre-cut a piece of green oasis, used by flower arrangers, to fit the base of the snow globe (which is actually the lid of the jar as we had to turn it upside down). The oasis made fitting the trees easy as we just poked them into the soft oasis. The original idea I had seen in the AWW book used superglue to stick the trees to the lid. Mum had found a small wooden snowman in the Christmas decorations box, so we added that into the scene as well.

The AWW book had used sea salt flakes to form the snow. I saw that the small pine trees we had were made with twisted metal stems and thought the metal may react with the salt and go rusty. I would like to reuse this snow scene yearly, so we found an alternative to using flaked salt for snow. Instead we used coconut. First we chopped the coconut into finer pieces in a small blender. This worked very well. We used a small spoon to strategically deposit the ‘snow’ into the right areas and to cover all the green oasis, and to flick some ‘snow’ onto the trees.

We carefully placed the jar over the lid and secured it in place. To finish the look we placed a silver ribbon around the base and glued the ends together at the back. The AWW book had used jars (such as Agee jars) which have screw-on lids. They had spray painted the lids of the jars with metallic paints to match a Christmas colour theme, such as silver, or gold. Our jar worked out fine, but initially we had looked for the old Agee or Fowlers jars, but in the short time-frame we had to make the snow-scene, we couldn’t find any of these jars that were a suitable size. The AWW book’s snow-scenes were able to be picked up and turned over, to create falling snow, just as you do with a water-filled snow-globe. Ours, however, was slightly more delicate as the jar had an inside edge that didn’t quite meet the oasis, creating a gap around the sides, which is why we strategically placed the snow, put the jar over it and didn’t touch it after that. Except, someone did. The snow-scene survived Christmas untouched, then sometime around New-year when no-one was looking, it was disturbed. The ‘snow’ was not covering the oasis properly and there was coconut stuck to the top of the jar. My brother knows who did this. I know he did it, but he hasn’t confessed. After it was disturbed, I said to him that it wasn’t meant to be touched and he stood there inspecting it innocently, and surreptitiously tapped the top of the glass to remove evidence of coconut stuck to the top. It was actually very funny, and anyway, it didn’t matter too much as it had to be dismantled in a few days time to remove the coconut, as it would go rancid if left in the jar and stored away for a year.

We now have a year to find some Agee jars that are a suitable size as I would like to try these types of jars for next Christmas. The shape of the jar will lend itself to being tipped upside down. Then, if someone does upend the snow-scene it will be less detrimental.