Most years I miss out on the important tradition of making the Christmas Cake with Mum, so this year I was determined to be part of the process. It is also nice to be able to make a wish while stirring the dry ingredients into the fruit mixture. As a general rule, Mum has the Christmas cake made by the end of October, but she very nicely held off this year until I could visit.

I thought we would simply follow one recipe, but what I didn’t realise was that Mum refers to two recipes to make the Christmas Cake. Both are recipes from family members on different sides of the family. Since Christmas-time is all about getting together with family, it is really nice to have the generations of past-family represented.

The main recipe we used is from my late-Aunt (CT). CT’s recipe is based on a pound-cake recipe and is reliable every time, as it doesn’t sink in the middle and retains its shape during and after cooking. CT used to make this cake often, not only for Christmas-time but for weddings as well.  The recipe is quick to make as the fruit and nuts are boiled in butter, and the dry ingredients are added into the cooled mixture. There is no creaming of butter and sugar and no whipping of eggs. The boiling part of the recipe can be done in the evening, and it can be left to cool overnight. The mixture needs to be cool before mixing in the rest of the ingredients. It is a remarkably versatile recipe as any ingredient can be added or subtracted as wished.

The second recipe Mum referred to for the spices, the almonds, cherries, a list of essences, and where the brown sugar comes from, is from Mum’s late-father’s brother Uncle Charlie. His cake recipe includes an unusual ingredient, ¼ of a teaspoon of cayenne pepper, (we left this out by mistake). He reckoned that the cayenne lifted the flavours of the cake. His recipe also has 10 eggs which makes it more time consuming to make than CT’s recipe.

My workmate (EJ) also had a hand in the cake. I mentioned to her that I was going to visit Mum for the weekend and we planned to make the Christmas Cake. The next day EJ gave me some of her homemade candied lemon rind in syrup. She knows I don’t like candied peel, but after tasting her lot, I can make an exception. EJ’s was the best lemon peel I have tasted. Mum was very appreciative of the peel, loved it too, and asked for the recipe. EJ made her Christmas Cake the same weekend and added it to her cake as well. The recipe is from Mary-Anne Boermans, a contestant in The Great British Bake Off, 2011. http://timetocookonline.com/?s=candied+peel EJ adores Mary-Anne’s cooking, recipes, and style. 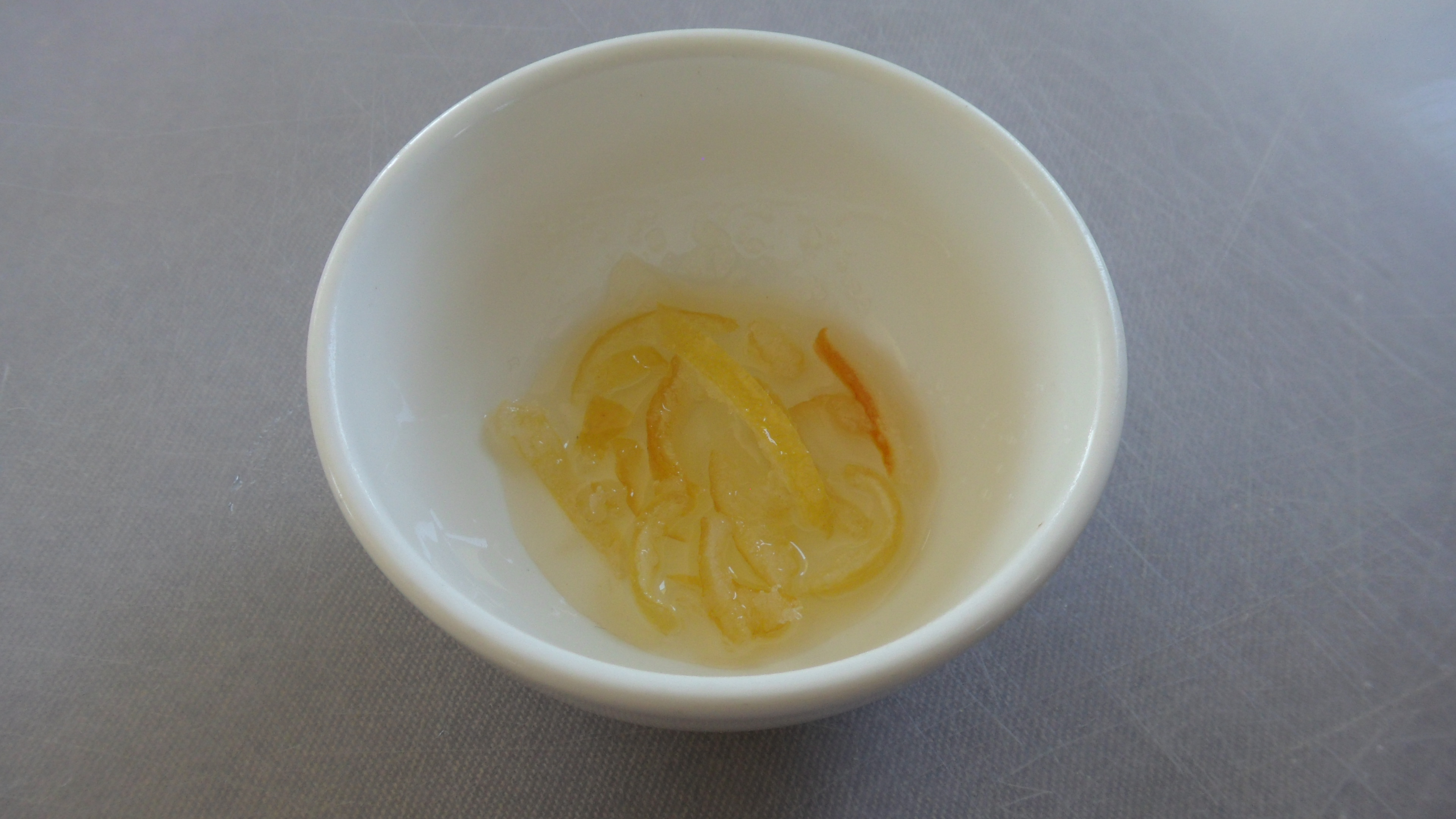 The delicious candied peel made by my friend and workmate EJ. (Much appreciated, EJ!)

The recipe that follows is how Mum made the cake this year. It combines the main recipe base from CT and extras from Uncle Charlie and because Mum refers to two recipes, I suspect that a few minor details may change each time she makes it.

The cake tins we used are cylindrical because Mum has a creative idea to make ‘Candle Cakes’. The two cakes will be stood up like candles and the icing will represent dripping candle wax.

1 pound fruit mix (bagged fruit mix, plus add the following extras to make up to a pound :

Boil all together for 10 minutes and let cool, then add:

1. Measure on scales 1 pound of fruit mix: (made up mainly of the ready-made bags of currants, rasins and peel.) Remove some to allow for chopped up glace red and green cherries, flaked almonds and more candied peel, large golden rasins, and large dark rasins.

We inspected the fruit closely to remove any stalks from the mixture.

2. Place a pot on the stove and melt the butter. Tip in the pound of fruit and nuts, water, sugar (brown and white), golden syrup, soda, and salt.

Bring it to the boil. Watch it doesn’t boil over, as the soda makes the mixture froth up. When the mixture is boiling turn the element down to a low setting and boil for 10 minutes.

3. After the fruit has boiled, remove from the heat and add 1 tablespoon of brandy.

4. Let the mixture cool off. It has to be cold before the eggs are mixed in. Any essences would go in at this stage, (but we didn’t have any), so we added another tablespoon of brandy. 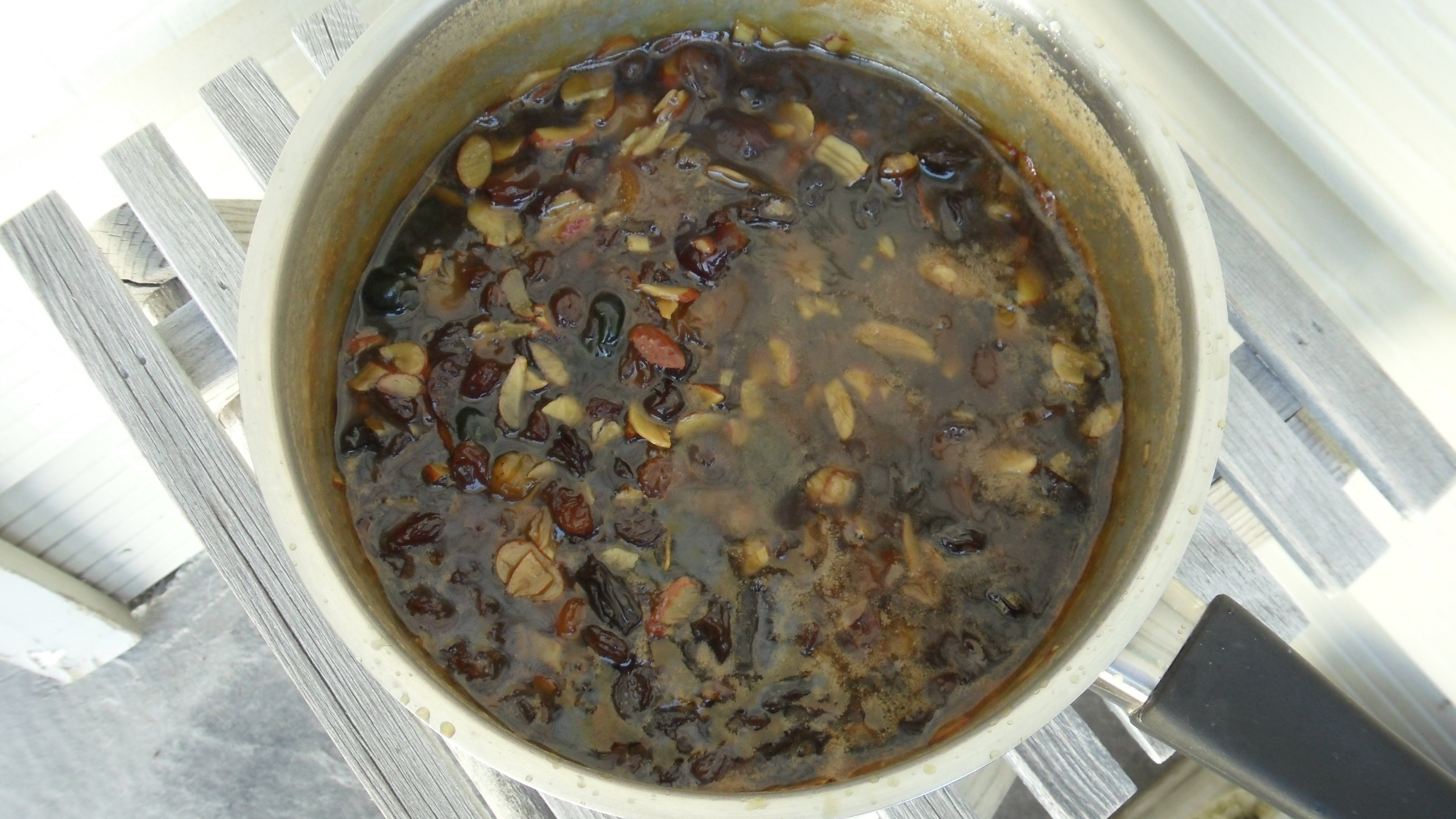 The boiled mixture cooling off.

6. Into the cooled fruit and butter mixture, add the eggs. They don’t have to be mixed, but we gave them a quick whisk. Add the dry ingredients in stages. Make a wish while stirring the cake mixture. 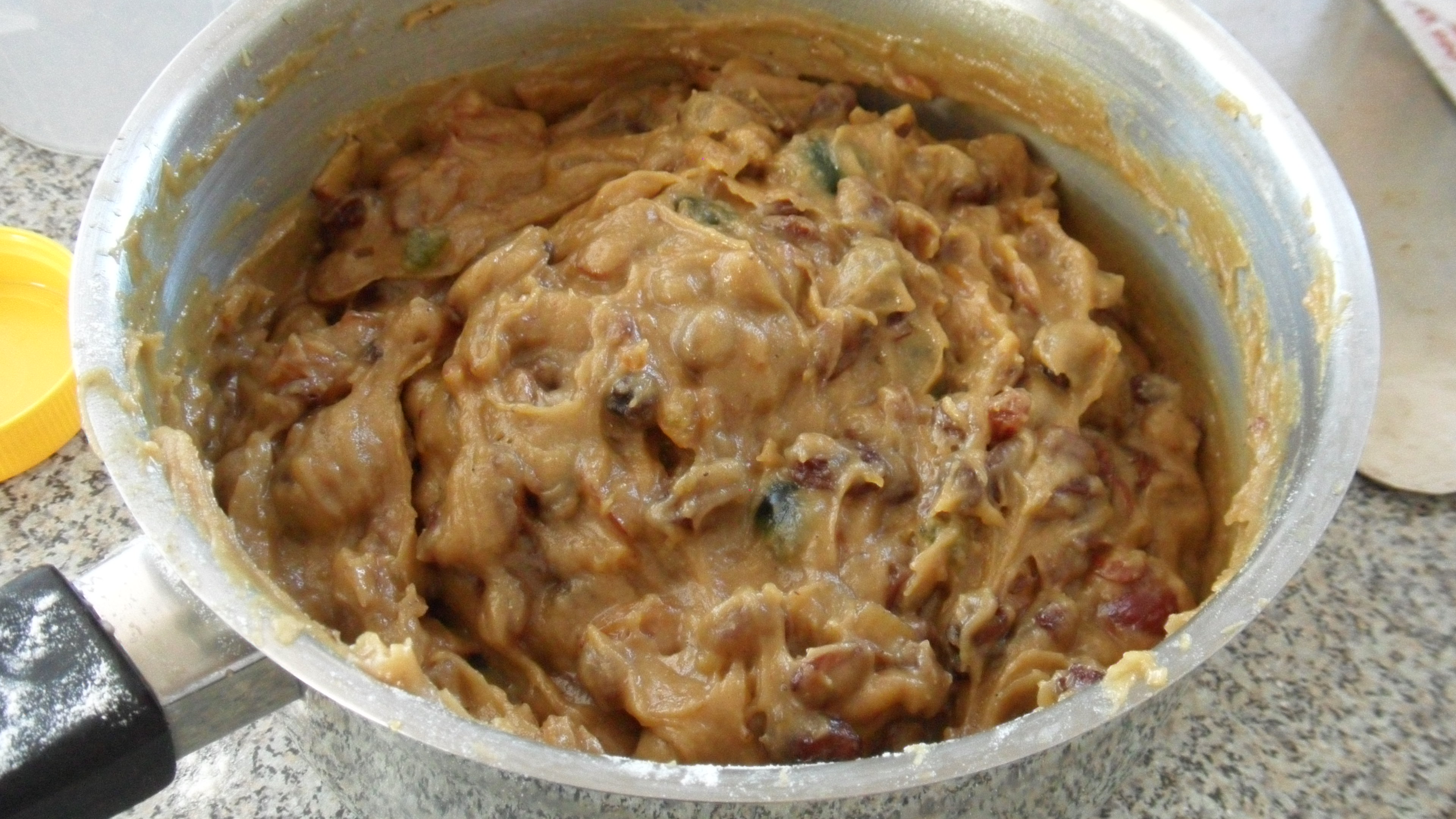 The eggs and dry ingredients mixed into the fruit and butter. The mixture is now ready to go into the tins.

7. Prepare the cake tin: We used cylindrical tins with a removable end.

Cut baking paper (two layers) to line the tin. Spray the insides of the tin with baking spray. Cut newspaper to go around the outside of the tin, at least 5 layers, as this stops the cake edges from drying out. Tie newspaper on with string. 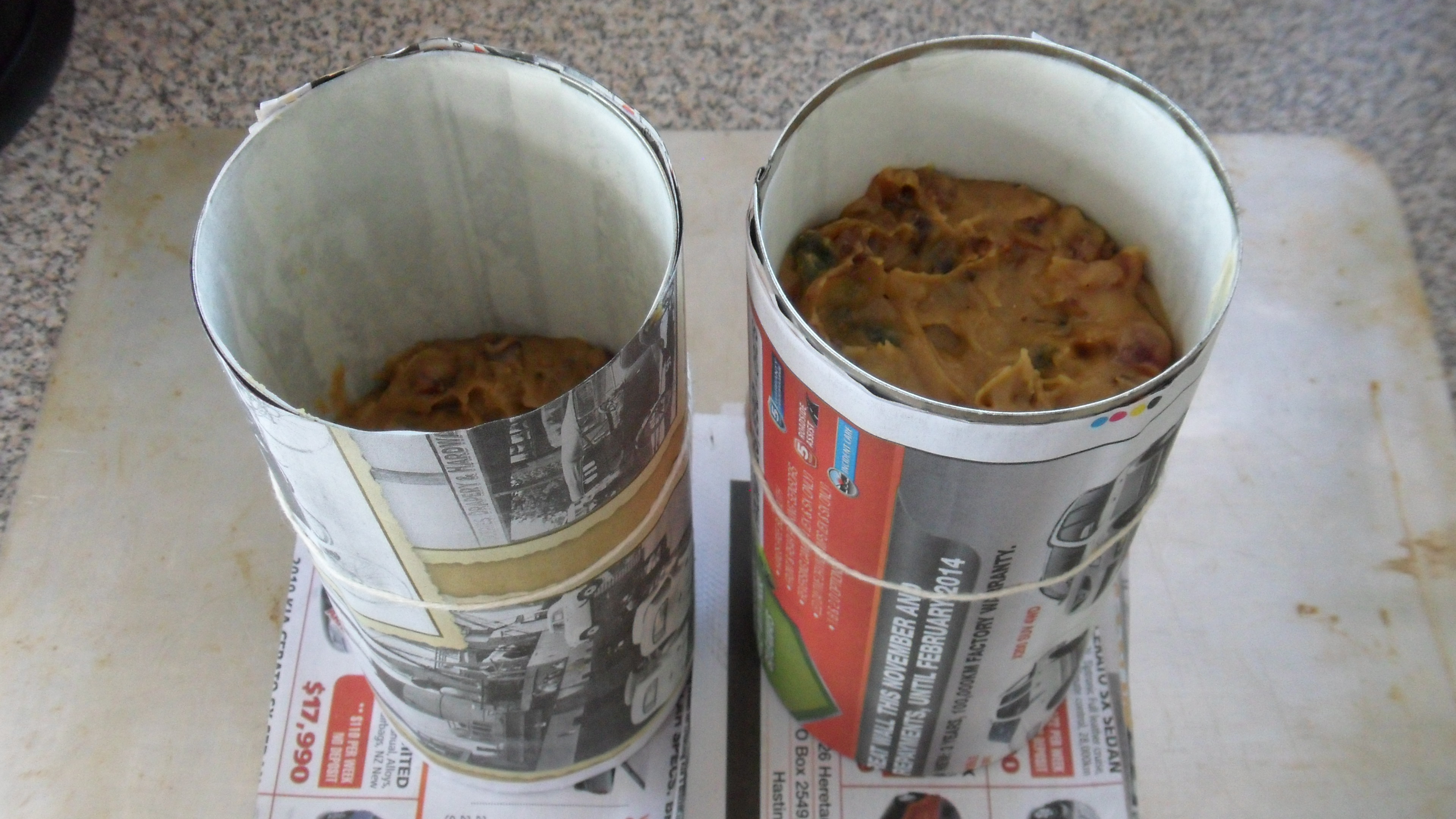 8. We cooked the cakes at 160 degrees celcius for 1 hour, 40 minutes. We then turned the oven down to 140 degrees for about 10 minutes. At this stage we took the smaller cake out and left the full tin in for another 5 minutes.

9. Leave cake in tin till cool. When removed from tin, distribute about a sherry glass worth of brandy over the two cakes, turning them to distribute evenly. In a weeks time, do the same, but with less brandy, (about a tablespoon for each cake), and once more the week after, and if needed the week after that, remembering to have some brandy “for the cook” too!

This mixture can be doubled or trebled in quantity, adjust the cooking times.

Later I will post pictures of the ‘Candle Cakes’. The cakes at the moment are wrapped up in an airtight tin, going through the process of having the weekly ‘brandy bath’ applied to them.

For reference: see the next two blogs as I have included the two original Christmas Cake recipes Mum and I referred to, CT’s and Uncle Charlie’s, to arrive at the above recipe.