How To Fold Origami 5-Pointed Stars

After making a few of these stars you will be able to make them easily without my instructions. To get you started I have provided detailed step-by-step instructions with a few tips as well.

First of all, we need to begin with a base shape of a pentagon. To learn how to make the pentagon shape first, please refer to my post here: https://www.inthekitchenwithmum.com/2015/01/how-to-fold-an-origami-pentagon/

The next step is to have your pentagon shape with the paper you want showing on the front of the star to be facing down, so if you are using one-sided patterned paper, place the patterned side down.

HOW TO FOLD AN ORIGAMI 5-POINTED STAR

Make folds across the width of the pentagon starting in a corner point and folding the paper in half. So you have this shape: 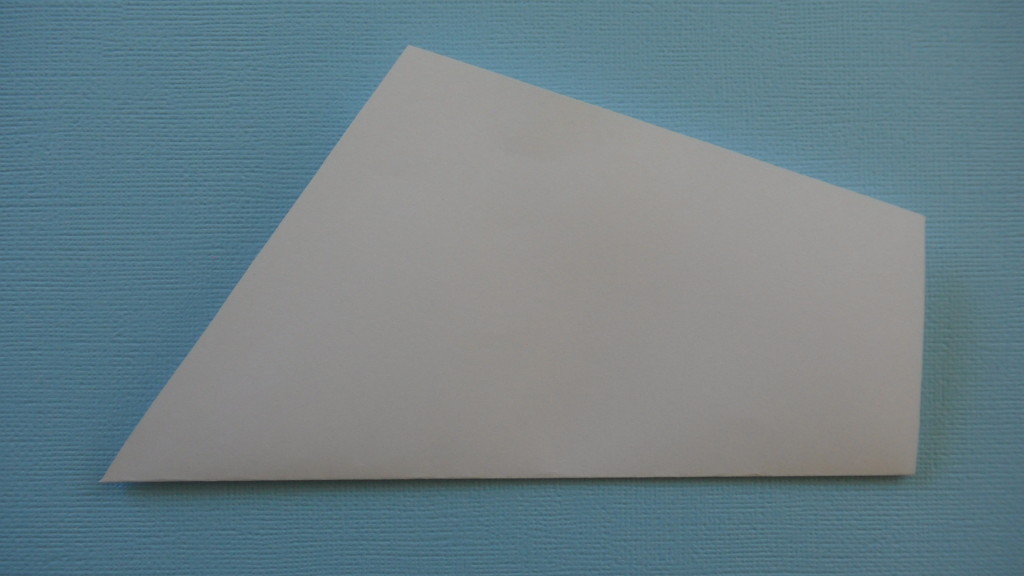 Unfold, and repeat this for each of the five points, until you have creases in the paper that look like this (I have drawn the fold lines in so it is clearer in the photo): 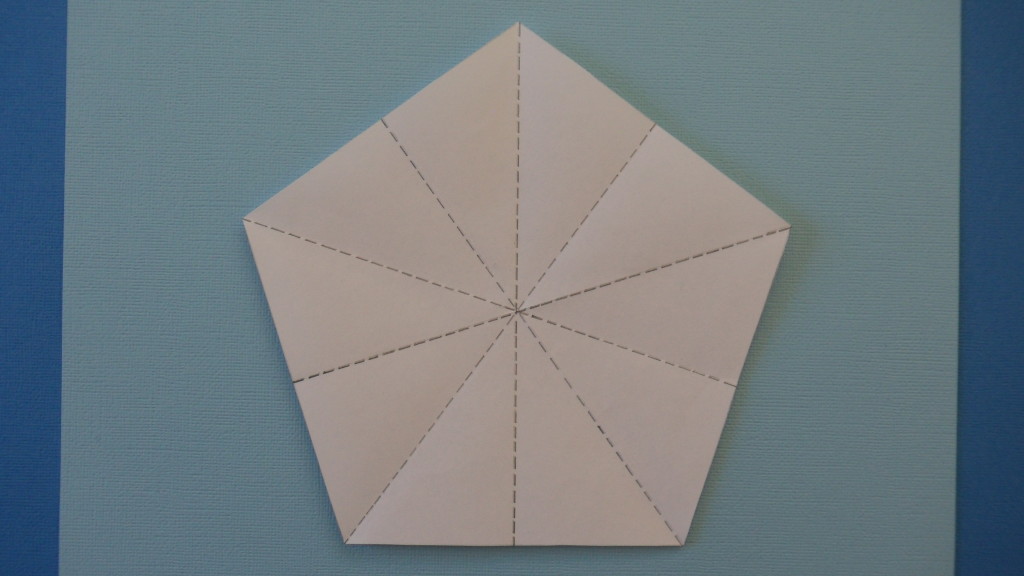 Next, fold the straight edge upwards, past half-way, so that the bottom corners meet on the fold lines (the fold lines are the ones that you made in the previous step that come from the points to the left and right). The following photo illustrates the fold: 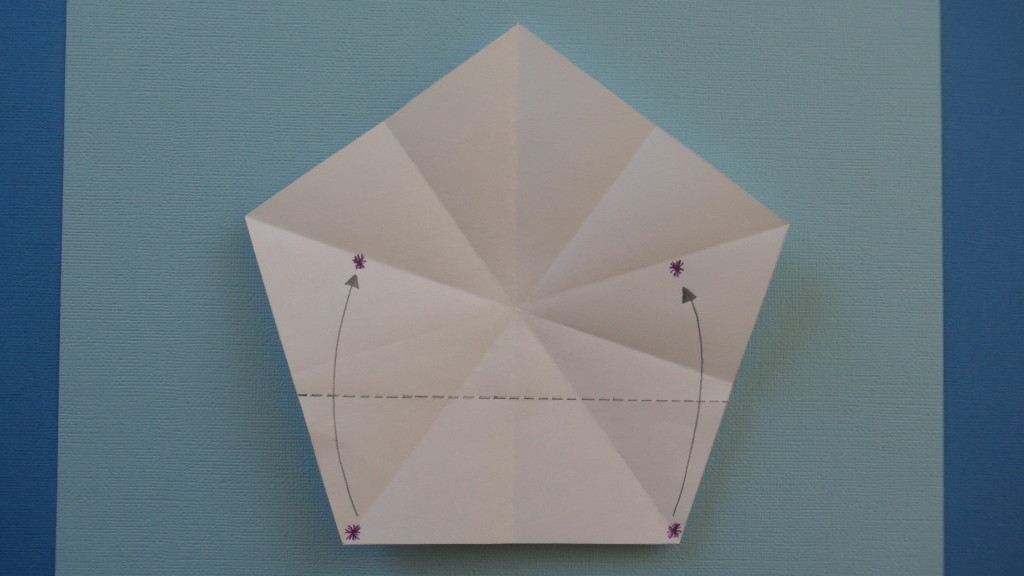 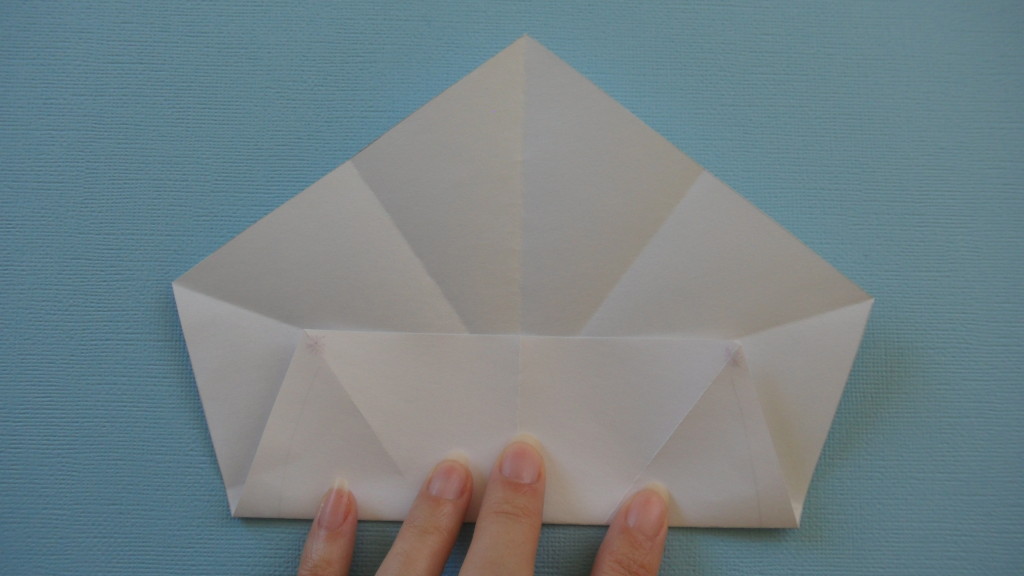 Unfold, and then make the same fold for each straight edge.

All the creases in the paper you have made so far should look like this: 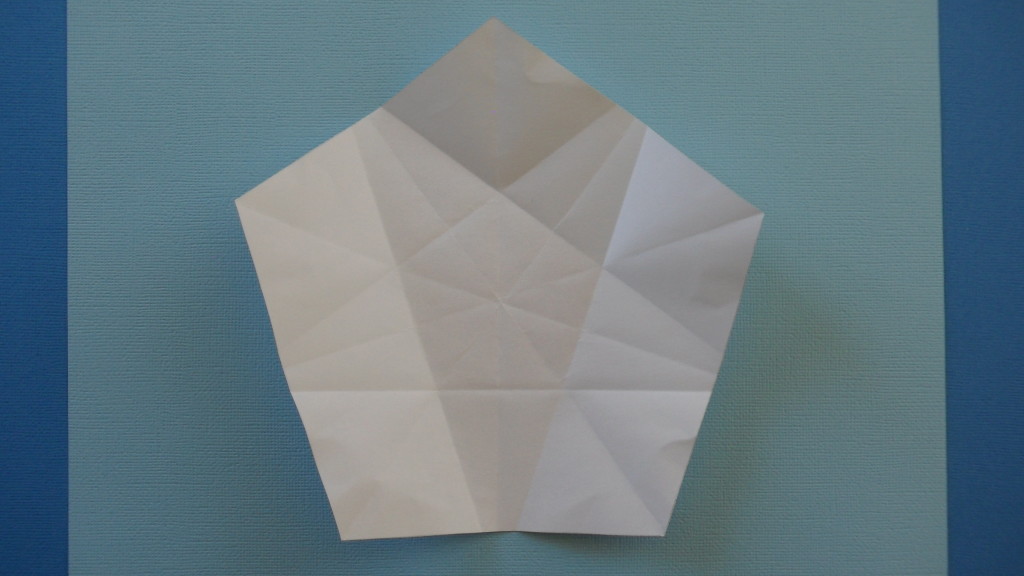 Fold in the edge, along a crease line that you just created: 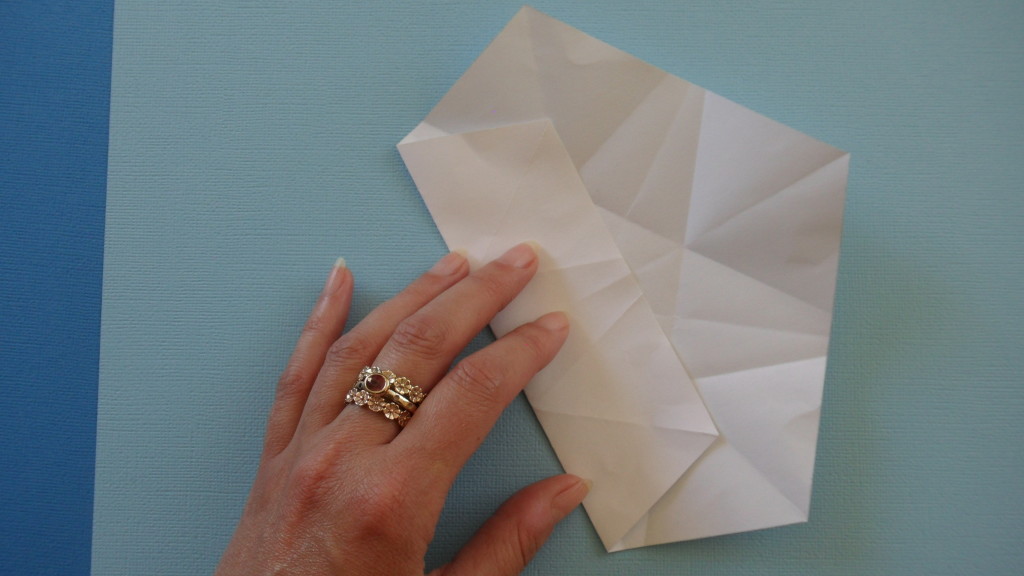 Now fold the bottom edge up, while making sure that the point that pokes up moves across to the left.

TIP: At this point, I find it easier to locate the point at the side where the two bottom creases meet – which I have marked in pencil in the next photo: 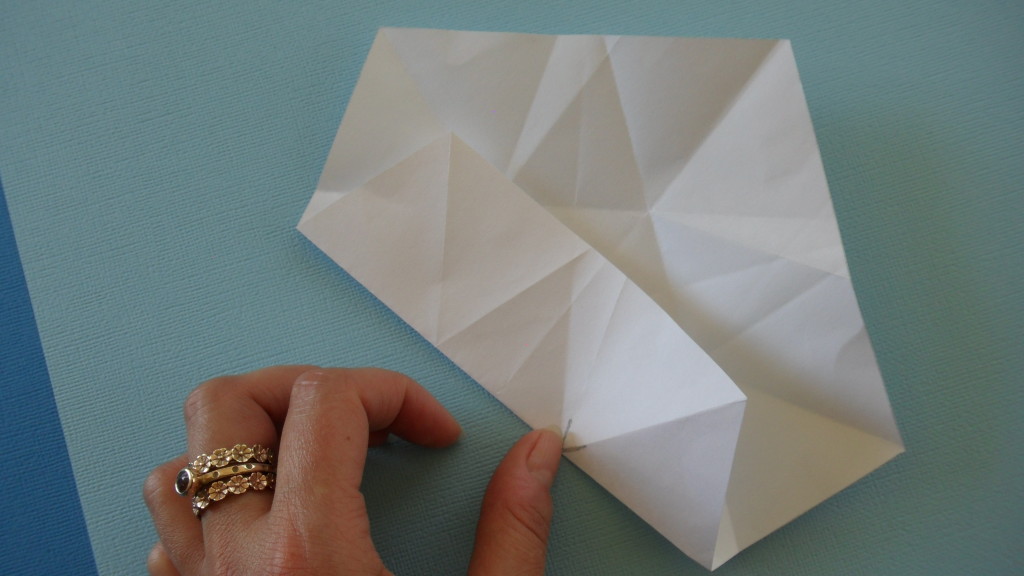 Place your thumbnail on this intersection of creases to act as a guide for the fold.

Then lift the bottom edge up, and create the crease as in the following steps: 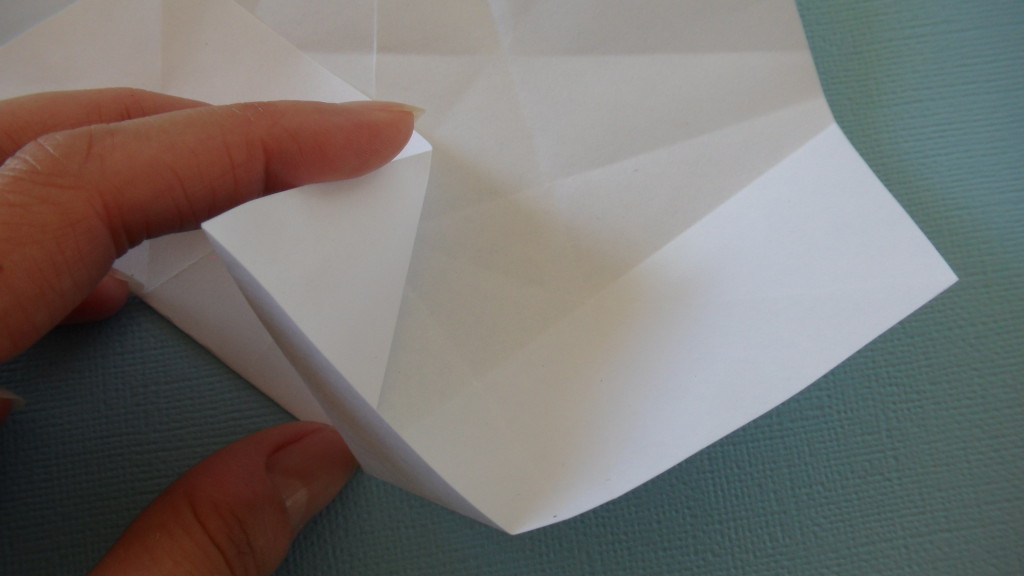 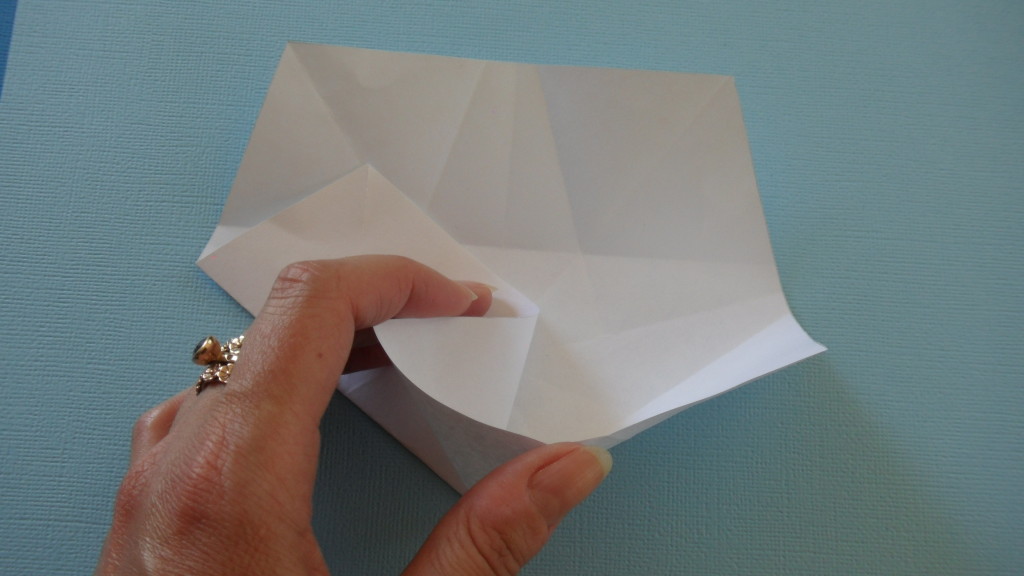 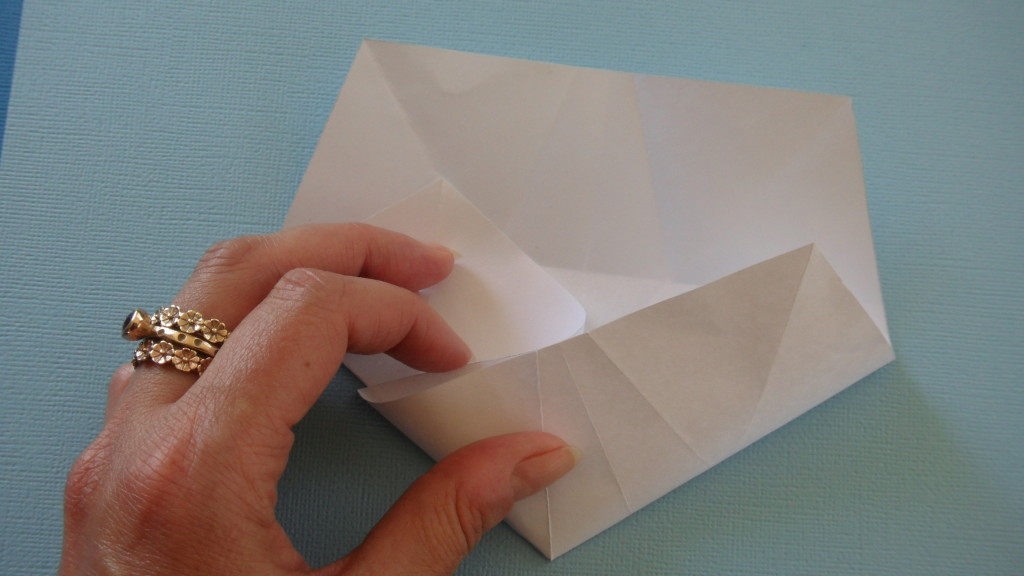 Crease the paper flat, and the resulting fold will look like this: 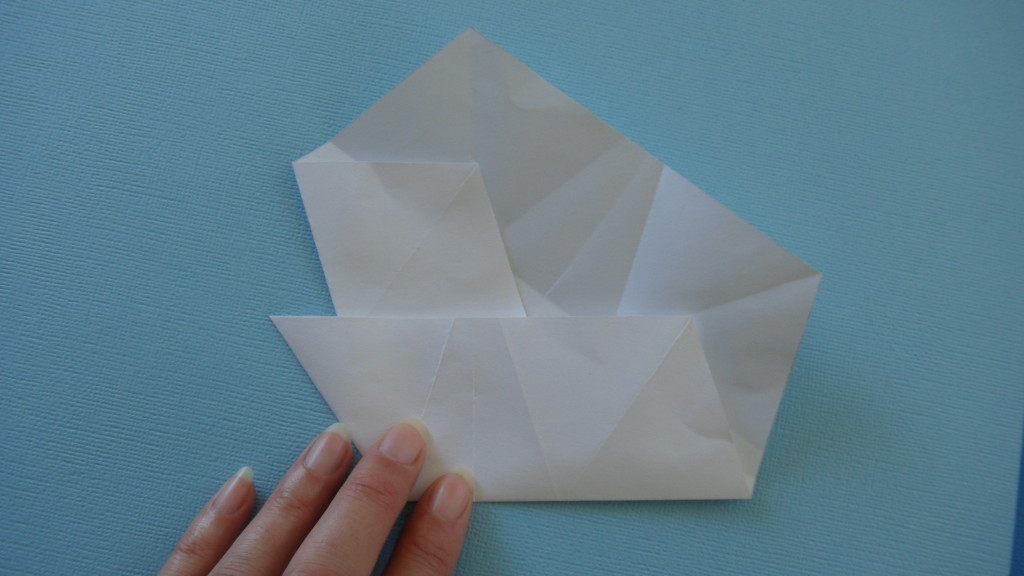 Unfold this, and repeat for the other 4 sides.

With your pentagon completely unfolded, pinch all the five points together like this: 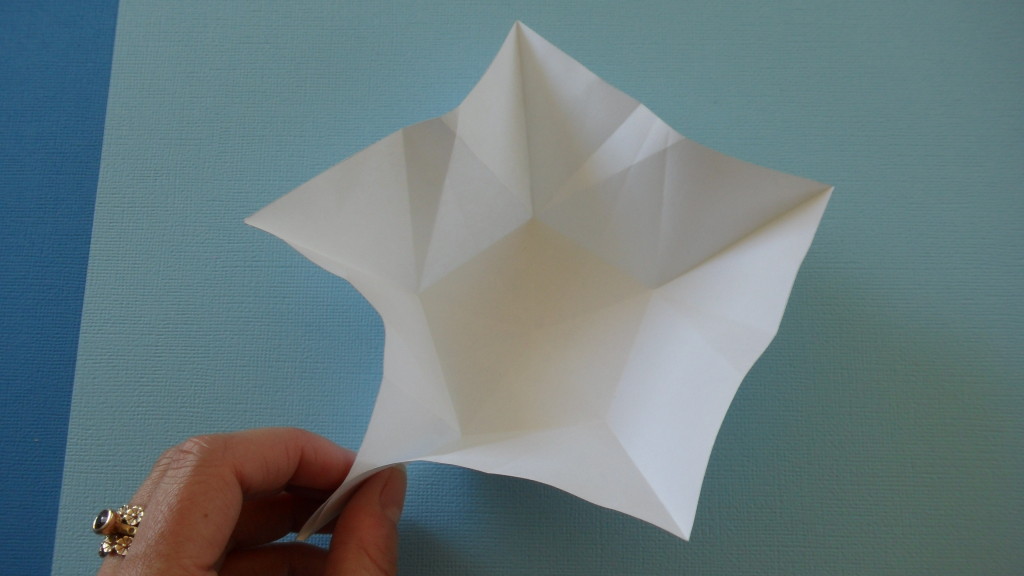 When the points are all pinched, gather the points together and bring them in towards the center and with a bit of wiggling, the star shape should start to find a natural fold pattern and slide together. This part can be a bit frustrating until you get the hang of it. 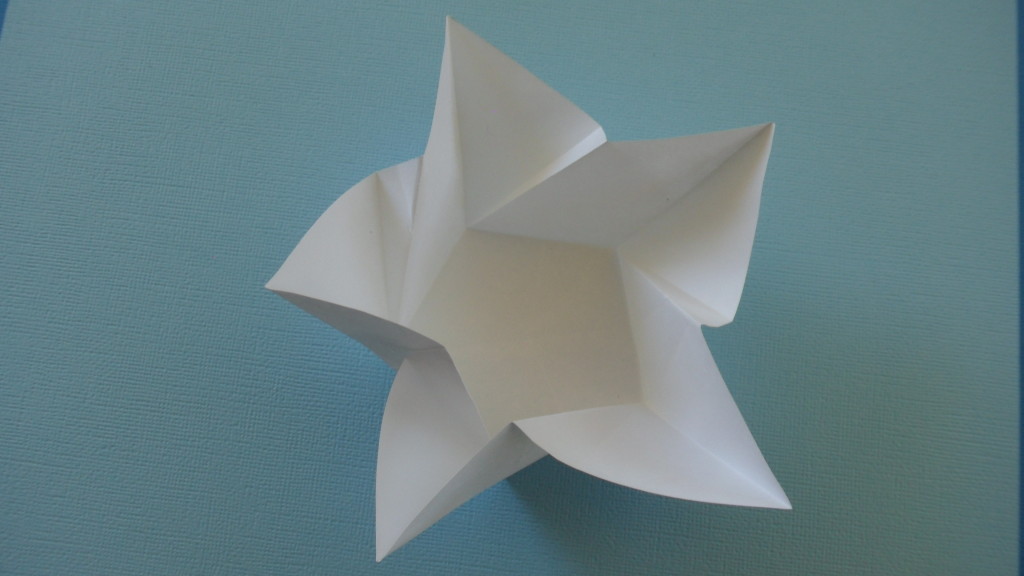 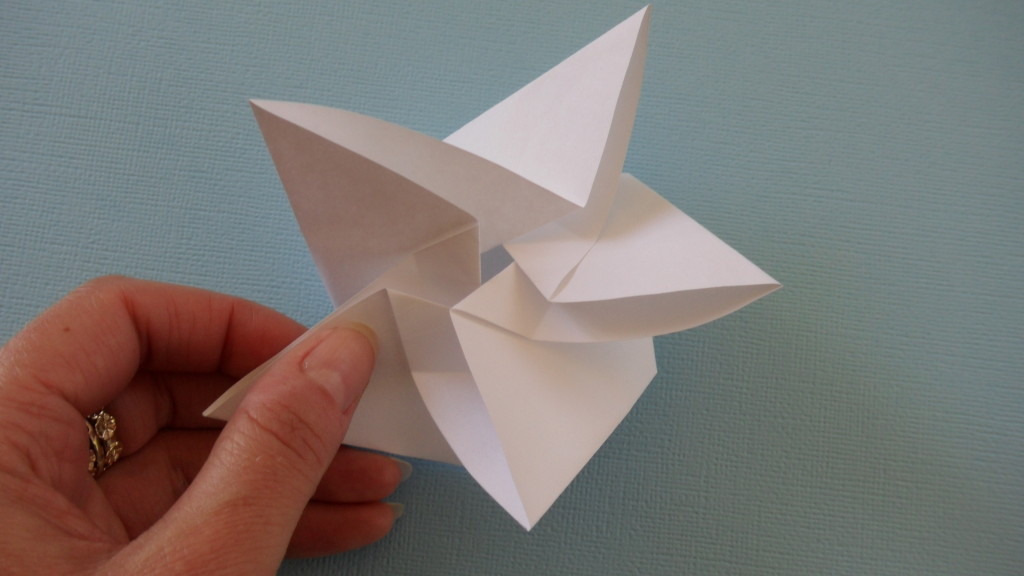 This is the star shape you have created: 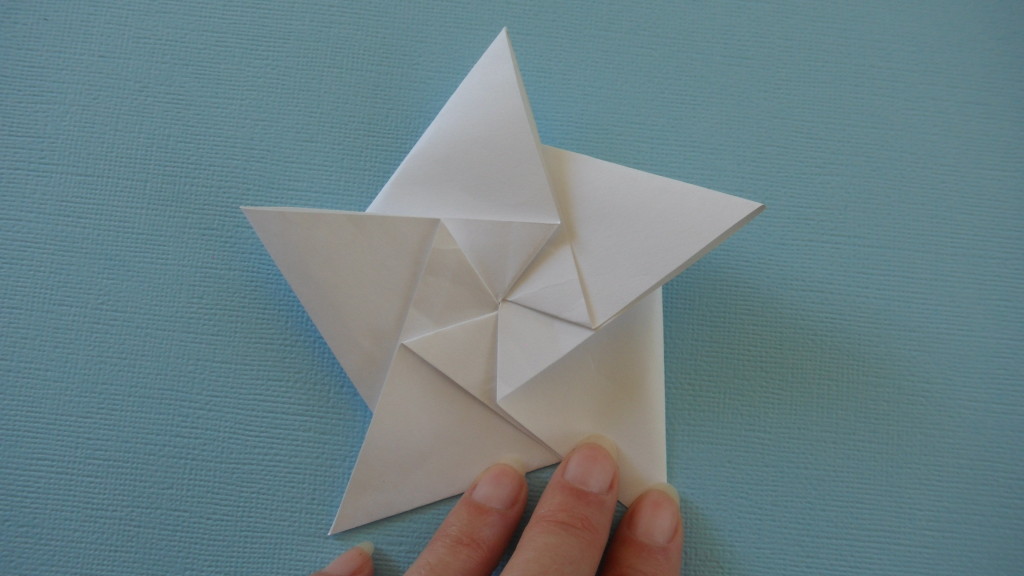 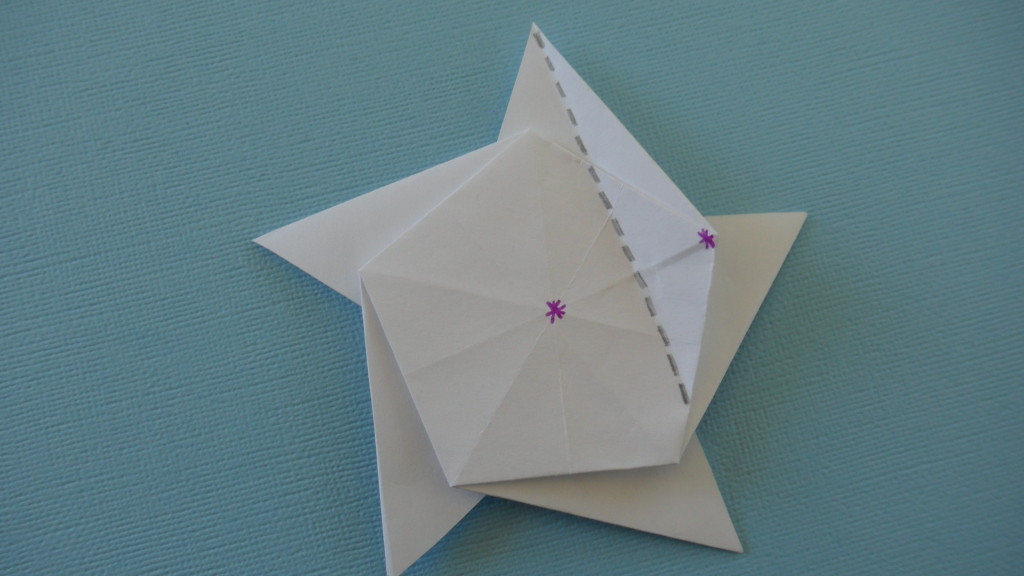 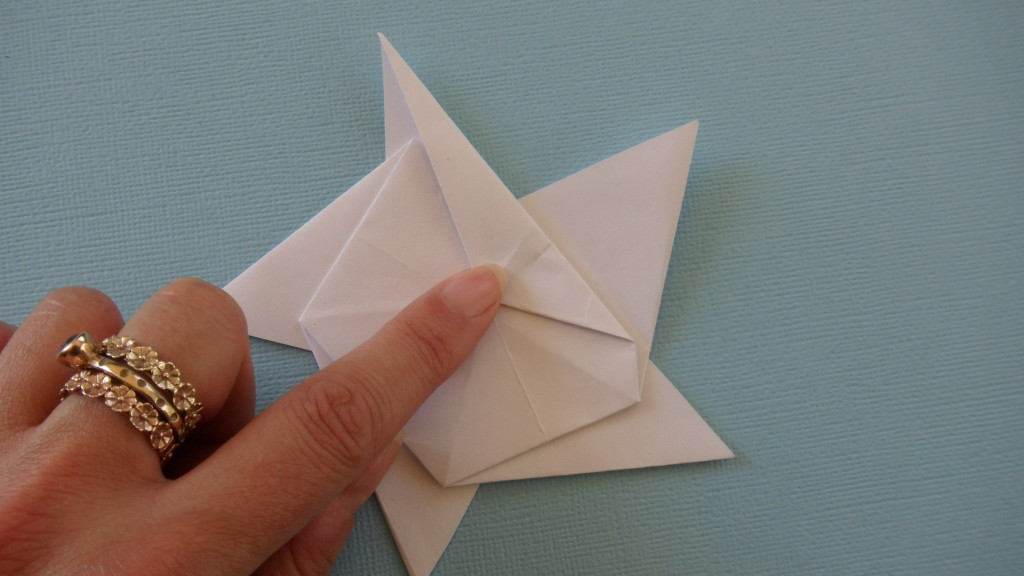 Now unfold this, and repeat for the other four remaining points.

Now we will form the actual star! Working around the star clockwise, refold the creases you just made, but this time keep them folded, so that each fold tucks beneath the next fold, this keeps the folds in place and the star holds itself together. 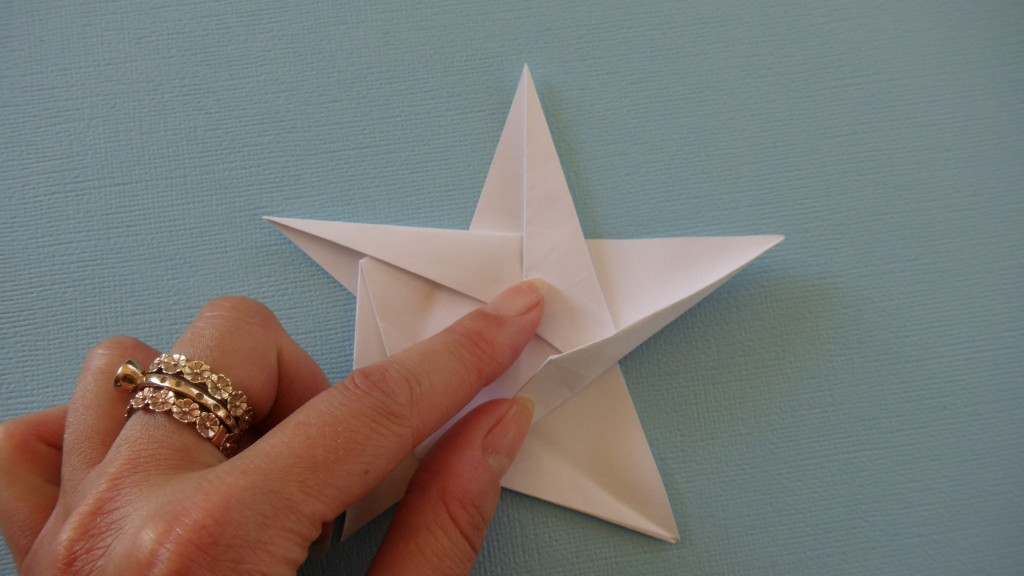 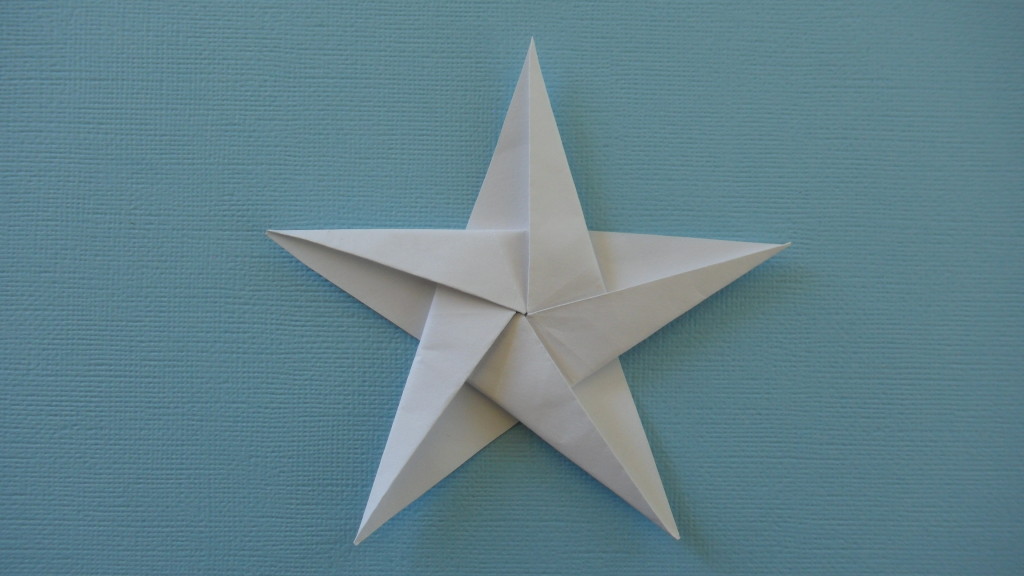 The back of the finished star: 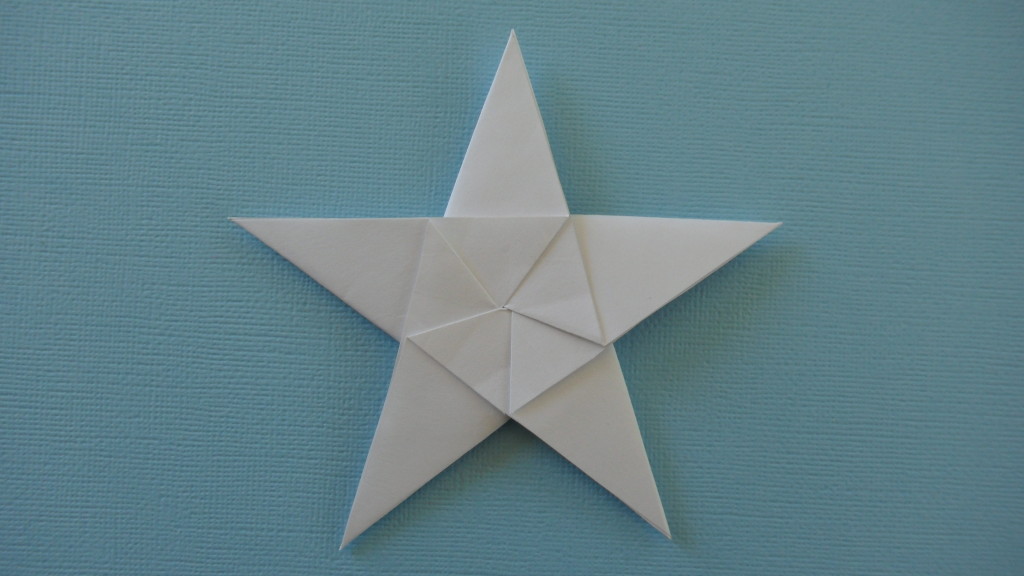