Seasonal Fridge-Art: ‘Sumer is Icumen In’

Here’s another one of Mum’s seasonal Fridge-art installments. These pop-up on her fridge from time to time, with art or verses usually spelled out in magnetic scrabble tiles. I never know what is going to pop-up and when I stayed with Mum in early summer I discovered this… 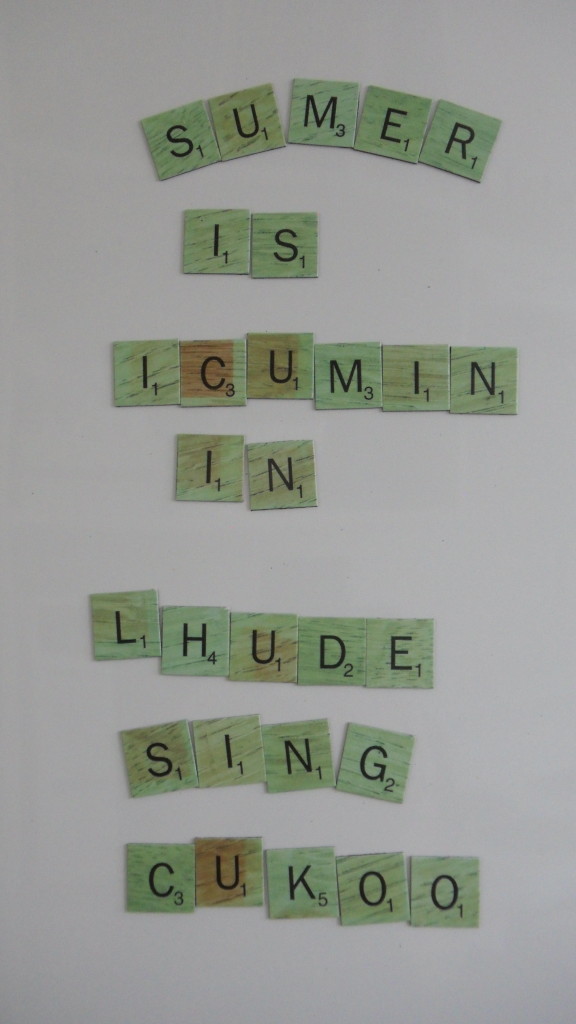 Right now you are probably wondering what this is all about. Is this bad spelling? Is it bad grammar? What exactly does this mean?? Well, me too. I was full of questions and Mum had to explain this one to me.

“Haven’t you heard of the saying ‘Summer is a-coming in’?”, Mum said.

“Well, vaguely”, I said, (which translates to: ‘I haven’t got a clue what you are talking about, but I don’t want to appear stupid’). So I also asked, “but why is it spelt like this?” And then to channel an art critic, I stood back and looked at the fridge, put my head to one side, as if in a thoughtful pose, and asked: “and what does this piece of ‘art’ mean?” (I also wondered why the cuckoo was singing lewdly).

Mum explained to me that the cuckoo wasn’t singing lewdly, the cuckoo was singing loudly, and went on to explain (thanks to the Oxford Book of Quotes) that the verse on the fridge is the beginning of a song written by an anonymous 13th Century English poet. The first verse goes:

Sumer is icumen in

And springth the wude nu

Summer has come in (or summer has arrived)

The seed is growing, and the meadow is blooming,

And the wood is coming into leaf now.

I was glad to have it confirmed that the cuckoo wasn’t being lewd at all, but loud. That’s a relief to know and makes more sense.

As for the dialect, Mum being Mum, she affected an accent and recited the verse on the fridge to me in a colloquial voice. It was a pretty good accent that brought to my mind the counties of Southern England, like the accent you would hear around Somerset or Wiltshire.

Wanting to know more about the verse than what the Oxford Book of Quotes could tell me, I did a quick google search and discovered that ‘Sumer is icumen in’ is a famous medieval English rota (a medieval term for round), and is meant to be sung as a six-part composition with a four-voice canon, and amazingly enough, it is the oldest known canon. The verse also goes by several aliases, one is ‘The Cuckoo Song’, and the other is the ‘Reading Rota’ because it was probably written by a monk, in Reading, in about 1240. The verse is written in Middle English in the Wessex dialect.

The Wessex dialect! The south of England! I had to laugh when I found this out as I had picked Mum’s affected accent as being from this region. For me to identify the correct counties from her rendition of the verse in dialect, must mean she is pretty good, in fact, pretty darn good at impersonations, you’d think she was a native of the county. Another one of Mum’s talents!

In Michael Schmidt’s large volume of work called Lives of the Poets, published in 1998, he says: “…The poem circles back on itself with a refrain, like a cuckoo’s woodland repetitions.”

He gives the full poem as:

Summer is icumen in,

And springth the wode nu.

Michael Schmidt says: “That’s all there is. The language isn’t hard if you listen: Summer is coming in, the cuckoo sings loudly. The seed grows, the mead blows and the wood springs anew. Sing, cuckoo. The ewe bleats after the lamb, the cow lows after the calf, the bullock leaps, the buck – verteth? has it something to do with green, the vert that the French brought with them? Or is the v pronounced f as in German, and is the buck making another sort of sound? – sing merrily cuckoo, cuckoo, cuckoo, you sing well cuckoo; then the sting of the poem, that word “swik” which means cease or give up – never stop singing.

It celebrates, like the opening of the Canterbury Tales, a change for the better; knowing that spring gives way to summer, autumn to winter, it asks – it prays – to the cuckoo, spirit of the wood, that this new beginning remain new, that the cuckoo never cease its song. Modernized, the poem evaporates, but the original, with strange accent and vocabulary, is necessary, full of feeling. It’s small, whole and complex…..this strikes us with the freshness of nursery rhyme and goes straight into memory…. Who wrote it? It was copied in the margin of a manuscript, which is how it survives.”

Lives of the Poets