PHOTO (this is where a photo of Lewis Road Creamery (and Whittaker’s) Fresh Chocolate Milk would be – but there is one small glitch – I can’t find any!)

Where is the stuff? There is nothing like short supply to create a frenzy of interest.

While short supply helps to create a frenzy, I also think the interest in this product is to do with brand quality and trust factors – Whittaker’s is high on the list of most trusted brands in New Zealand, and is certainly known for producing fine quality chocolate. Lewis Road Creamery is an award-winning dairy producer, associated with quality artisan products, and has the motto of quality over quantity. They describe themselves as a “small independent and passionate New Zealand company that’s just finding its feet and believes Kiwis deserve the best dairy produce”. The creamery has hit the nostalgia factor as well, with the shape of their milk packaging imitating the old-style glass milk bottle, which serves to bring back memories and reminiscences of days gone by.

And we can’t forget the patriotism factor either, as these two New Zealand companies, whose names are synonymous with local produce and quality can bring out the pride in any New Zealander. …And last, but not least, we must remember a huge factor in all this, the chocolate factor, of course, which never fails to be a winner.

So with all of these factors, this product was a sure marketers dream before anyone had even tried the product, as it needs no promoting at all, and sells itself through public awareness.

Such is the hype and frenzy for this stuff that supermarkets have employed security guards to stand over the chocolate milk and make sure everyone is taking only their fair quota. A ‘black market’ has popped up with bottles for sale on the auction website TradeMe. One listing, that must be a joke, was for 2x 750ml bottles for a ‘buy now’ price of $100. Counterfeit products, very similar to the original product have also been offered for sale. I have only ever heard glowing reports about how very good the chocolate milk is and reviews that start with “This chocolate milk is divine. It’s smooth and rich and oh so chocolatey”, only serve to fuel the fire. (Newspaper: Hawke’s Bay Today).

I know the chocolate milk is not a myth because I have seen two bottles of it on the dairy fridge shelf in a supermarket. This was back in the first days of October just before the hype really kicked in. And what did I do? I left it on the shelf. Why, you say? Well, hindsight is a great thing and looking back, I do regret this very much. But, the two bottles were of the 750ml larger size and I wanted to test the milk by buying the smaller, dinky 300ml size. If only I had known about the short supply and the buying frenzy that was soon to start, I would have thanked my lucky stars and taken the milk, but instead I-got-all-choosy and missed out.

Everywhere I go I hear people talking about this milk product. To prove my point, I just overheard two separate conversations at the supermarket milk fridge with people searching the shelves for the chocolate milk, and leaving empty-handed with some very disappointed children. In the same supermarket visit, when I went through the checkout, the operator asked me if I had tried the chocolate milk yet. She hadn’t either, but had heard it was very nice (she also let me into a little secret that the supermarket had never had supplies of the milk on the shelves, only because they can’t get any). I was very interested to hear that she sees a lot of people going through the checkout with Lewis Road Milk and Whittaker’s Milk chocolate bars to make their own chocolate milk!

In another supermarket I have seen kids sitting on the floor waiting hopefully at the dairy fridge for a milk delivery. I guess this is one very good way to get kids to drink lots of milk.

Whittaker’s have been busy with co-branding initiatives lately. We saw them team up with the L&P soft-drink to bring us white chocolate with L&P popping candy. Then they teamed up with Griffins Biscuits, and I posted an article last August called ‘Whittaker’s and Griffins Cookie Bear Hundreds and Thousands Chocolate Block’, about the white chocolate, coloured pink and incorporating biscuit pieces and hundred and thousands sprinkles to imitate Griffins famous hundreds and thousands biscuits.  [Click Here for my article].

There is a rumour that the collaboration between Lewis Road and Whittaker’s is only the start of a range of flavoured milks to be developed with other well-known Kiwi brands, but details are secret, (I’m hoping for milk flavours of rocky road or pineapple lumps, or jaffa please!, but my bets are on Hokey Pokey).

Hopefully I can add to this post when I actually try some of the scarce chocolate milk. …And there is still hope – Lewis Road Creamery are working around the clock to produce as much chocolate milk as they can “going through 3000 kilograms of Whittaker’s five roll refined creamy milk chocolate and 24,000 litres of milk a week”. Until then I will just have to regret my decision to leave a bottle of it on the shelf.

Success at long last – I have finally tried the chocolate milk. Here it is January 2015 and I have waited since October 2014 to try this stuff. It was a fluke that I got any at all – it was just a case of pure luck, of being in the right place at the right time. I was in New World Supermarket in Greenmeadows, [I was actually there to pick up a bottle of Lewis Road plain homogenized milk – and as an aside – there was a man there taking a photograph of the milk on his smartphone because he couldn’t even get the Lewis Road plain milk in Wellington, and he just had to send a photo of it to his wife]. It was 12pm on a Saturday and the chocolate milk must have just been placed in the fridge. I grabbed a bottle, turned to say to Mum, should we get the bigger bottle?, turned around again and all the stock had gone!!!!!   There had been at least 12 bottles of the large size and 5 of the smaller size. All gone!!!!!   Such is the demand. Not bad for a small company that started out in a converted shipping container in Whakatane with the goal of making butter. They are now at Mangatawhiri in the Waikato and have branched out into other products, but are still a fairly small operation.

I have to confess I wasn’t expecting much from the taste of the chocolate milk, but this was a cut above the rest. The chocolate milk itself was worth all the hype. You could see the chocolate content settled in the bottom of the container, which needs a good shake and on opening the bottle and pouring the milk in a glass, the distinctive rich cocoa smell that Whittaker’s chocolate has, permeated the air. The taste was really creamy and truly chocolatey – I just could not put the glass down and drank the whole lot. Oops.

What I like about Lewis Road Creamery, apart from their products (their plain milk ranges are just the best), but it’s also the customer service. They are really good at replying to tweets – even at 11.40 at night! That’s dedication.

Al long last here is a photo of the product. This is the 300ml bottle: 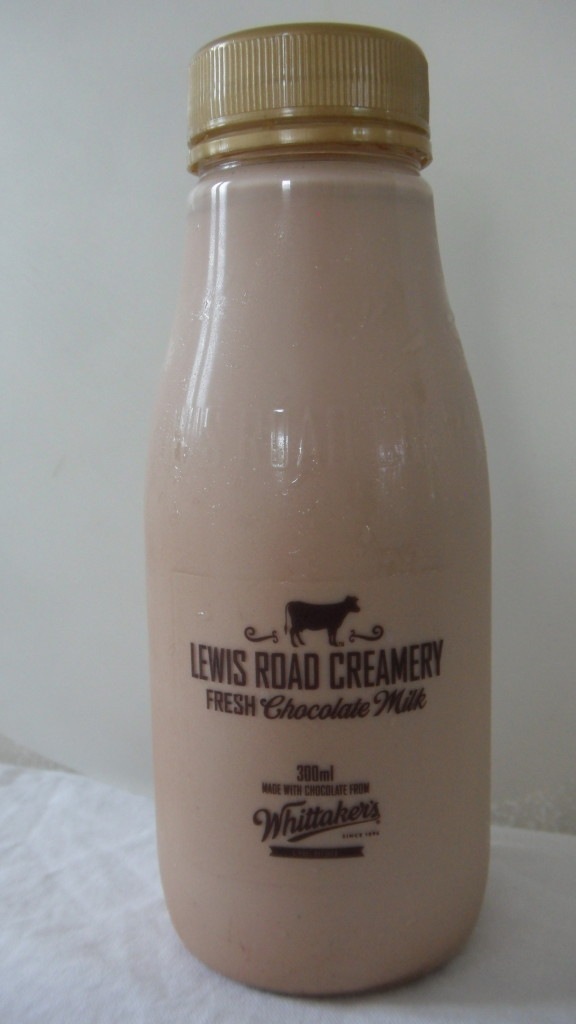 And the information on the back of the label: 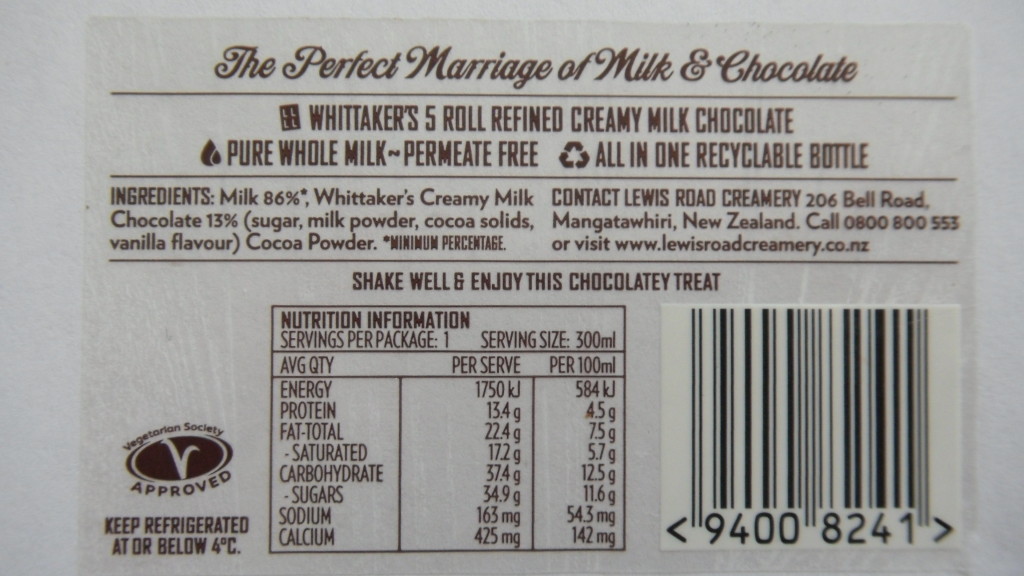