Whose mother travels on the bus with her carry-on luggage bursting with home-baking? Mine does, that’s who. Mum’s carry-on bag contained no less than Plum Cake, Feijoa Muffins, biscuits, lemons to make a Lemon Syrup, and a pot of butter!

Mum stepped off the warm bus and into a bitterly cold wind that carried more than a touch of iciness in it from the snow-covered mountains. It was lovely to greet Mum, even if it was only a brief stop-over in my town on her way to Wellington. She said that in her travel bag she had some birthday cake for me. As she was travelling on the bus, I thought it must have been a slice or two of cake, but Mum produced a whole plum cake out of her bag, packaged up in a cake-tin to prevent the cake getting squashed and then wrapped in extra protective layers of baking paper.

I was then handed a bag in which were 6-7 lemons and hand-written instructions on how to make a lemon syrup to drizzle over the Plum Cake. Mum also included a piece of soft netting, (this is used to wrap around a lemon, then when the lemon is squeezed, the pips and pulp stay contained in the netting). She has thought of everything!

“This is a plum cake for your birthday”, Mum said. This is the plain cake as Mum gave it to me, at this stage minus the Lemon Syrup. 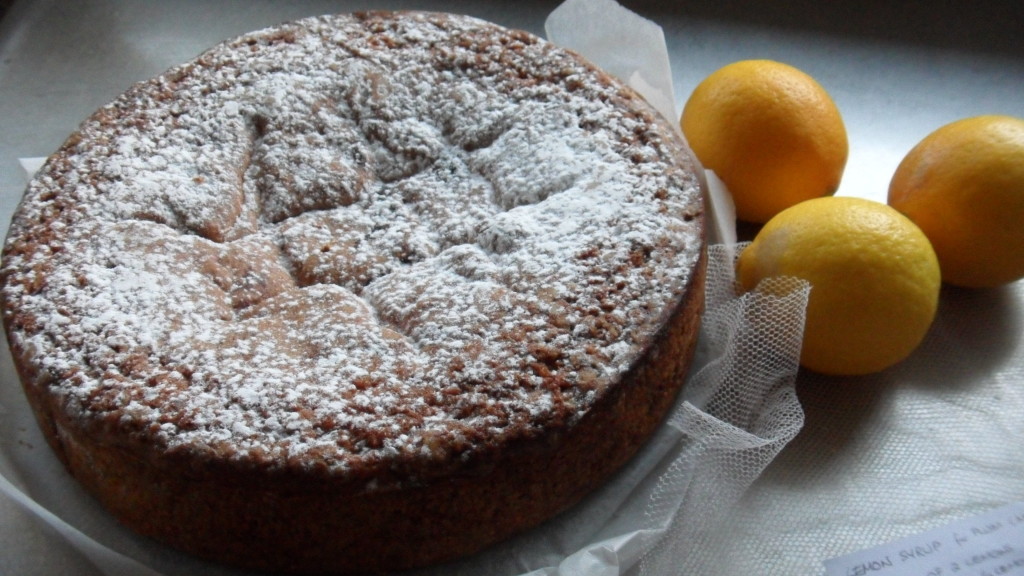 Not only was there a whole cake in Mum’s carry-on luggage, but also a large container full of Feijoa Muffins. These she baked especially for my workmates, which was a nice act of kindness by itself, but Mum had also extra-thoughtfully provided a knife and another container with butter which she had cut into cubes. 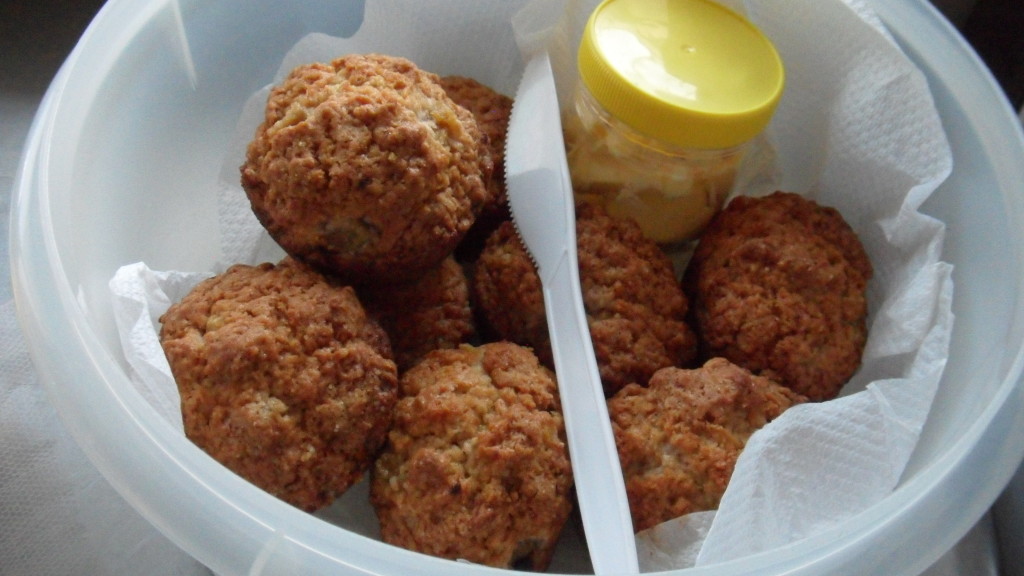 But this was not all: at the bottom of Mum’s “luggage” bag I spotted a batch of biscuits. Apparently they were not for me (I had better not be too greedy), but these were for the lucky recipients at the end of Mum’s bus journey. I later found out that these biscuits were “craisins (cranberry raisins) and flaked almonds with almond flour instead of coconut”, Mum said, “you know from a peanut biscuit recipe?” “Errmmm, no, not really” I said, as it sounded a bit confusing (as she so often does, Mum had changed a recipe to suit, and then added more changes for good measure, so I was not likely to recognise the original recipe).

Before re-boarding the bus, Mum gave me strict instructions NOT to put the plum cake in the fridge.  With the Plum Cake, Feijoa Muffins, plus all my added extras, of lemons, instructions, and netting off-loaded onto me, Mum’s luggage was a lot lighter! I gathered all this up, and waved goodbye to Mum as she left for Wellington, then lugged all the baking home.

At home, I was too eager to try the cake, so cut into it without making the lemon syrup. At the same time I shed a few tears – Mum must have been up early and baking all morning (not only my birthday cake, but baking for others as well), then organising everything so no detail was forgotten, and all before catching the bus. I had a slice of cake,… then another slice. The cake had a soft light brown crust and was a light yellow colour inside. The consistency of cake was lovely with a light texture to the crumb, and dotted throughout the cake were half-plums. These were Black Doris plums that Mum had been given and she had bottled them earlier in the year.

My workmates loved the Feijoa Muffins. The feijoas were wind-fall fruits that Mum and I had collected last April. Mum had then bottled the feijoas with lemon and ginger and used these in the Feijoa Muffins. (See my blog in the May archives for the recipe: ‘Feijoas Poached in Ginger Syrup’. The Feijoa Muffin recipe is Mum’s most frequently used recipe. I have blogged this in several forms, most recently in ‘Apricot and Walnut Muffins’, as it is a very accommodating recipe for using different fruit combinations.)

As for the Plum Cake, I’m not sure I was supposed to break into it so soon, I think I was supposed to leave it to the actual day of my birthday. This was in a few days time when Mum was coming to visit me on her way home. The cake had been sitting in my pantry all this time, and after a few texts to Mum, asking if I should put the cake in the fridge now, (to which the answer was still no), Mum said we would make the lemon syrup to go over the cake when she arrived. Well, it was lucky there was still some cake left.

When Mum arrived we duly made the lemon syrup. This was very easy to make (but we only made half the recipe as I had eaten a fair chunk out of the cake). The amount of syrup seems like a lot for the cake, and it gets a proper drenching, but the liquid soon soaks up completely. This makes the cake more like a dessert consistency, and it would be nice served either cold or warmed with cream or yoghurt. This cake is perfect either as a cake/pudding with the syrup, or as a cake without the syrup.

Mum’s instructions for making the lemon syrup to pour over the cake: 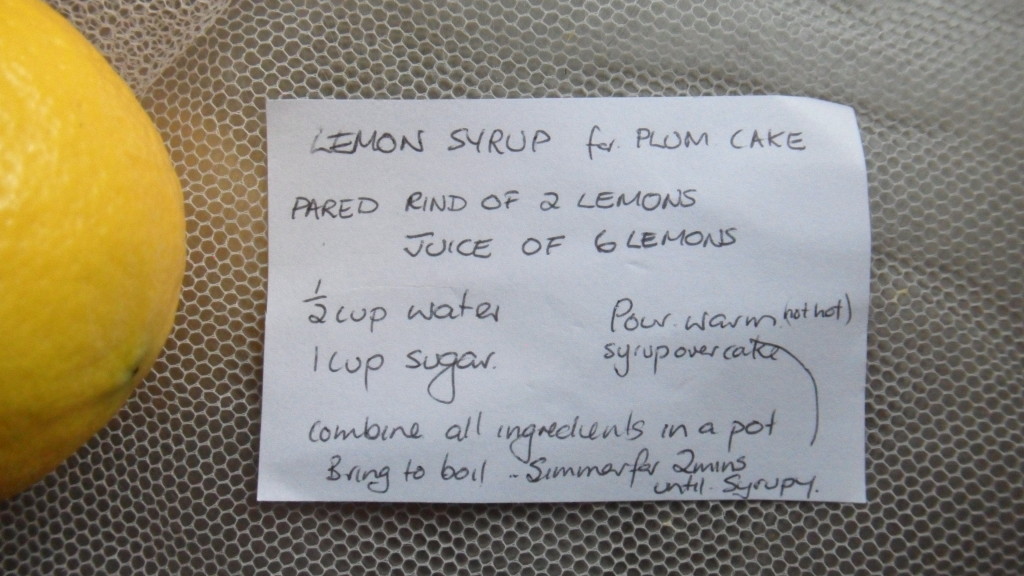 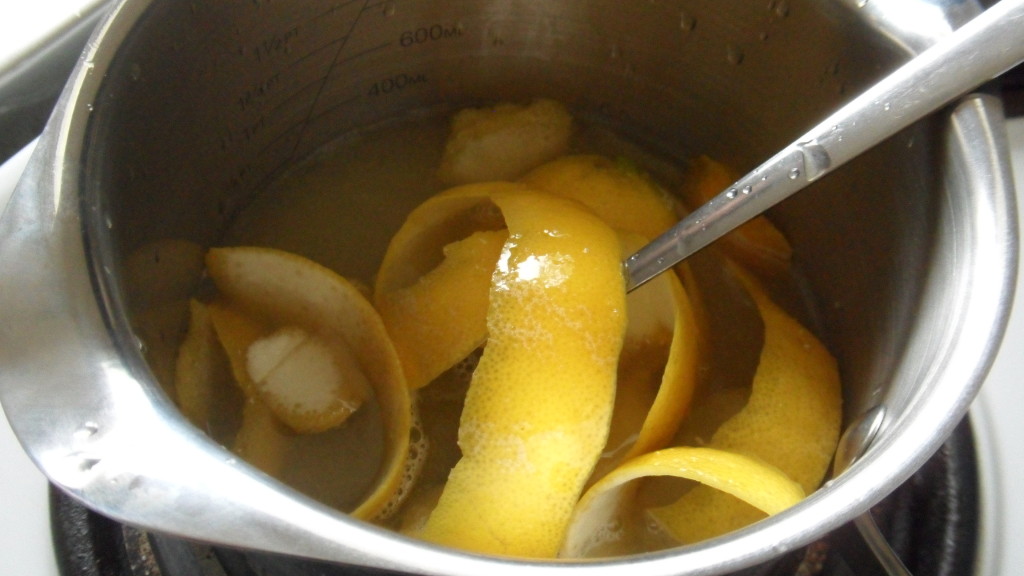 The cake drenched in lemon syrup. The recipe is from Julie Le Clerc and is officially called Plum and Coconut Cake with Lemon Syrup. 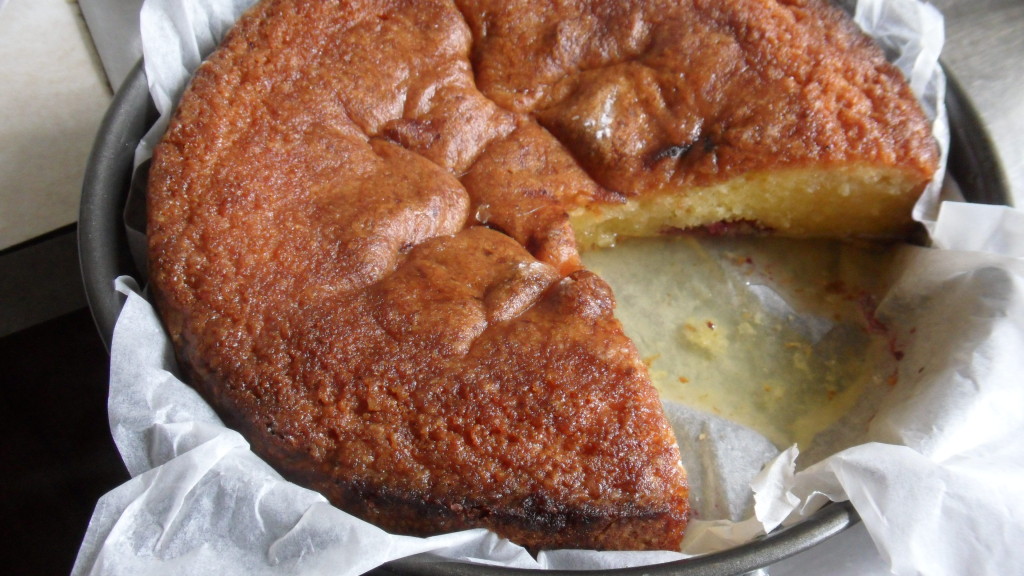 I have to add that the cake is also perfect with a nice dark red wine. For my birthday dinner we had a slice of Plum Cake with a Church Road, McDonald Series, Hawke’s Bay Merlot, 2011. A superb wine and a very, very good food-match combination with cake (in my opinion, cake is good at anytime of the day and anything goes with cake!)

In my next blog, my birthday continues (why stop at one day only!), and I feature some sweet treats I received as gifts from my workmates.