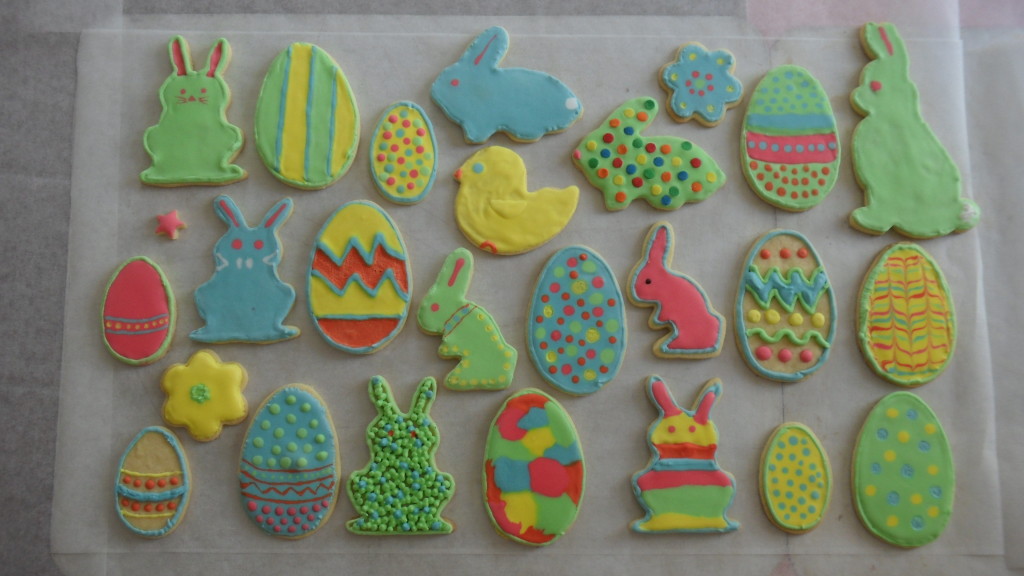 The eggs only. They look eggs-tra specially eggs-cellent. 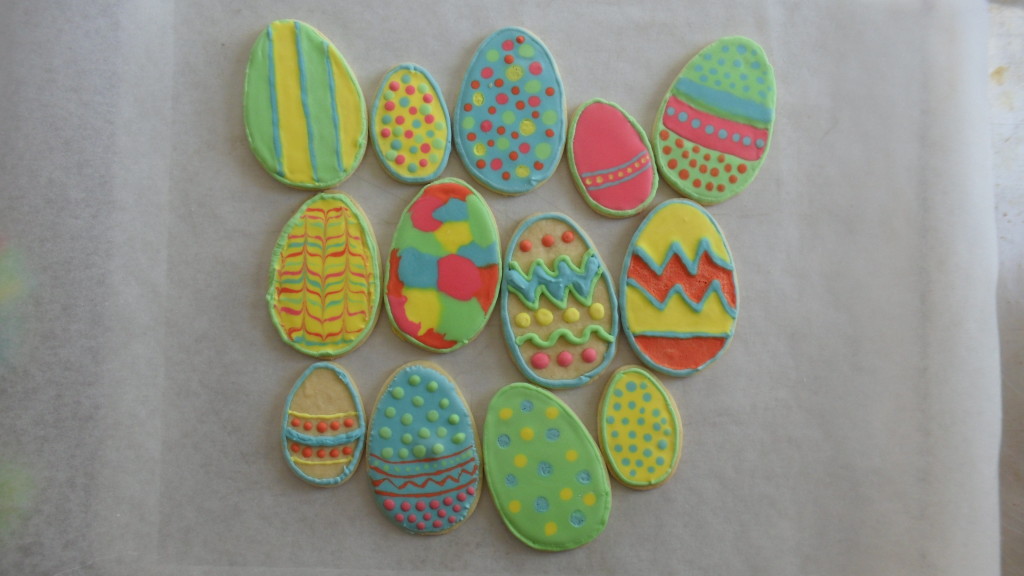 We didn’t put all our eggs in one basket: we added a chicken and bunnies as well. A pretty blue bowl of pretty biscuits : 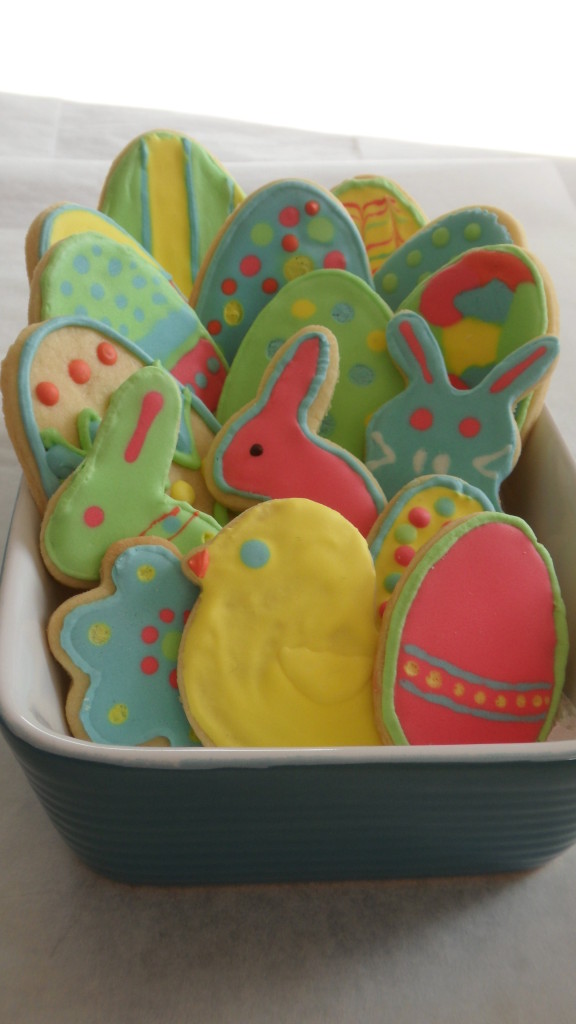 “Time consuming but absorbing, and fun to make” – this how Mum described the making, baking, and icing of these biscuits.

We used a recipe from the Woman’s Day magazine Easter supplement of April 2014, where the recipe was called ‘Chicken & Egg Cookies’, and featured pretty blue and green iced egg shaped biscuits with yellow, green, blue, and pink spots, and yellow chickens. We had intended to follow this pattern, and ice our biscuits in the same way, but as you can see by our varied biscuits we went way off our plan and into creativity-land.

What a mess we made at icing time. We had implements everywhere – bowls, spoons, toothpicks, syringes, piping bags and icing accoutrements, trays and paper. We put a plastic tablecloth down first which was a good thing…

This is before the mess started in earnest: 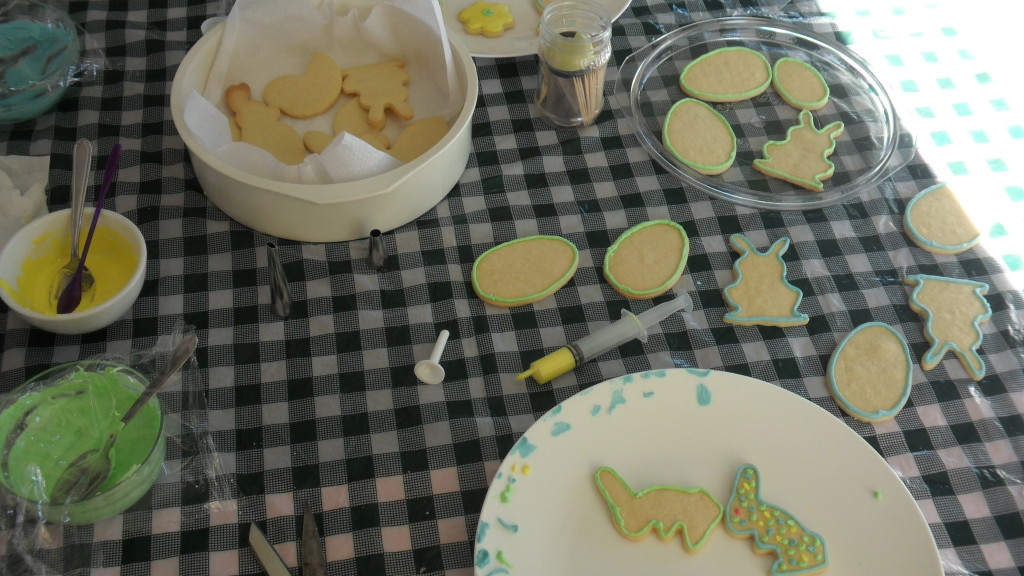 Mum and I were at the table for hours having fun icing these biscuits. Lunch-time came and went and we were too absorbed in our icing projects to notice. We got totally carried away with our creativity and all kinds of colourful patterns appeared. In addition to our green, blue, yellow and pink icings, I even made some orange icing later on specially for the beak and feet of the chicken. We also used a touch of white icing for other effects, such as rabbits tails and whiskers.

The four main colours of our icings: 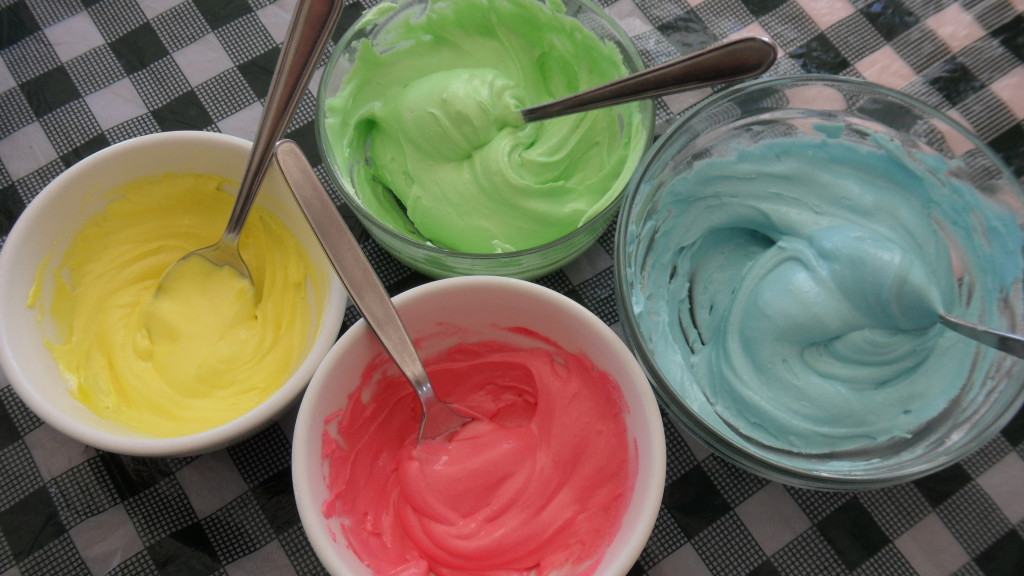 We named some biscuits – there was ‘Joseph’ in his amazing technicolour dream-coat (and in the first photo above, he is in the bottom row); the blue bunny in the left of the photo was called ‘Bucky’ until a workmate thought he looked ‘shifty-eyed’ so he became known as ‘Shifty Bunny’ ; the green bunny with multi-coloured spots looked exactly like an antique green Sylvac Bunny until he broke out in spots ; the green and blue dotted bunny in the bottom row is a nod to the artistic movement of Pointillism ; and the spotty eggs are in homage to the Japanese artist Yayoi Kusama, who is obsessed with spots.

It is well worth knowing how to ice biscuits with Royal Icing as it can be used in so many different festive biscuits and Royal Icing is used on celebration cakes, (such as wedding cakes), and the icing keeps for years.

We made the icing thicker to pipe around the edge line of the biscuits, then added lemon juice to thin the mixture so it could ‘flood’ the areas between the piping lines.

Beat butter until it looks creamy, then add both sugars gradually. Beat in egg and vanilla gradually, then fold in flour in thirds.

The mixture was very light and fluffy: 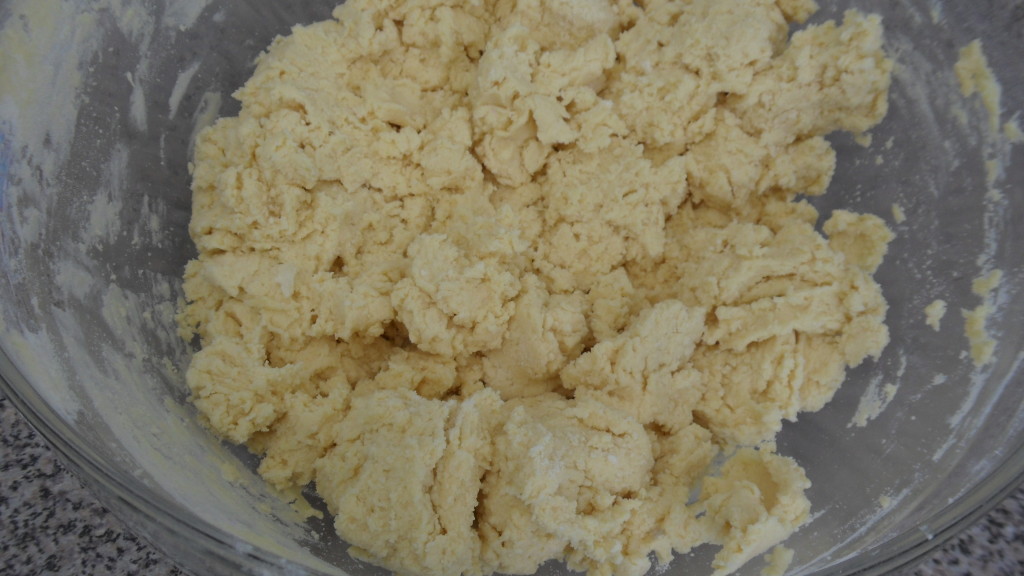 On a lightly floured surface, gently knead dough to incorporate any crumbs, then shape into a disc. Wrap in plastic wrap and chill for 30 minutes.

The chilled dough shaped into a disc: 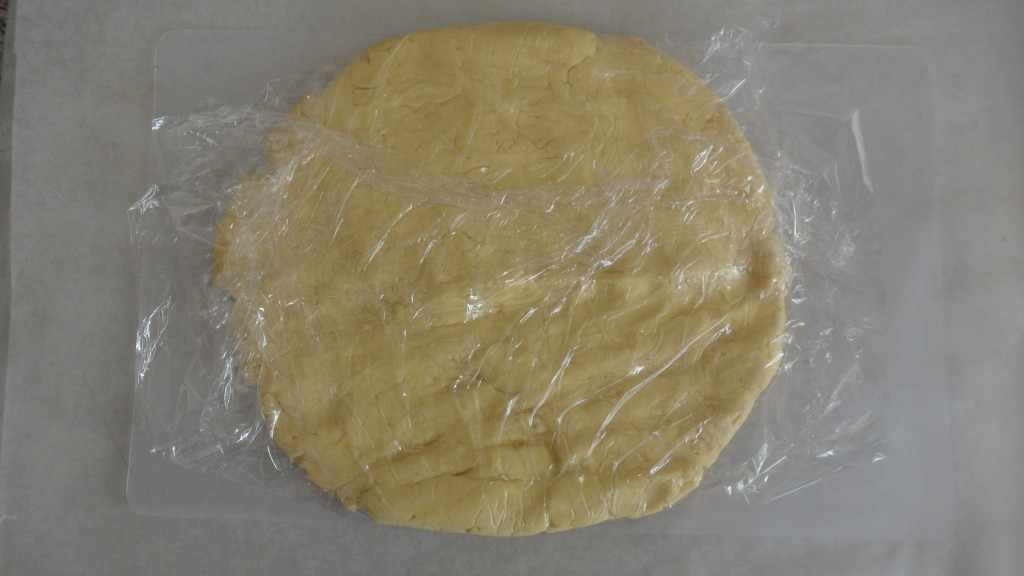 Take the disc of chilled dough out of the fridge and cut it in half. Replace half into the fridge to keep it chilled, otherwise it will be too soft to roll out properly. Roll out the other half of the dough. As a tip – to stop the dough sticking to the rolling pin, place a piece of baking paper on top and underneath the dough to roll it out and flour both sides of the dough lightly first. Roll out till the dough is about 5mm thick.

Cut out shapes. Arrange biscuits 2cm apart on trays. Gather up left over dough and roll out again to cut out more shapes. If the biscuits have shapes that have long thin areas, such as rabbits ears, place these into the centre of the tray to avoid browning. Bake for 10-12 minutes. The cooked biscuits should be a creamy colour instead of golden or browned. Cool on trays for 5 minutes before placing on a wire rack to cool completely.

In a bowl, whisk egg white until just frothy. Gradually add sugar and lemon juice, whisking until smooth. Divide icing into separate bowls to add colourings. Spoon icing into piping bags and pipe around the border of each biscuit. Then flood the centre colours by thinning the icing with more lemon juice.

We made some changes to this recipe:

Instead of plain sugar, we used caster sugar because it creams into the butter easier as it is less granulated.

I have added in extra instructions such as keeping half the mixture cooling in the fridge because otherwise it will become too soft to work with. Another addition is to roll the dough between baking paper, among other small changes.

We liked this recipe because it incorporated icing sugar which makes the biscuits easier to blend and makes a smoother mixture. Also the icing sugar adds a crispy ‘shortness’ to the texture, as in shortbread and melting moments.

We also liked the recipe because it uses a cooler oven which is better for this type of biscuit.

Plus the Royal Icing recipe includes lemon, which Mum says is what her mother used to add into her egg white Royal Icing.

Bakers Tip: this is a basic biscuit recipe for plain vanilla biscuits that can easily be modified to make Shrewsbury Biscuits. Replace the vanilla essence with 1 tbspn of grated lemon rind and add ½ tspn of baking powder. Cut the biscuits into rounds with a scalloped edging and in every alternate biscuit (which will be the top) cut a hole in the centre in the shape of a star or heart or a circle. Sandwich together with raspberry jam when cooked and cooled.

We were intending to use the following recipe from New Zealand House & Garden magazine (April 2014 issue, number 236). I have included it for comparison, but decided to use the Woman’s Day recipe above, for the reasons I have stated.

This is the picture in the House and Garden magazine of their Iced Vanilla Easter Biscuits: 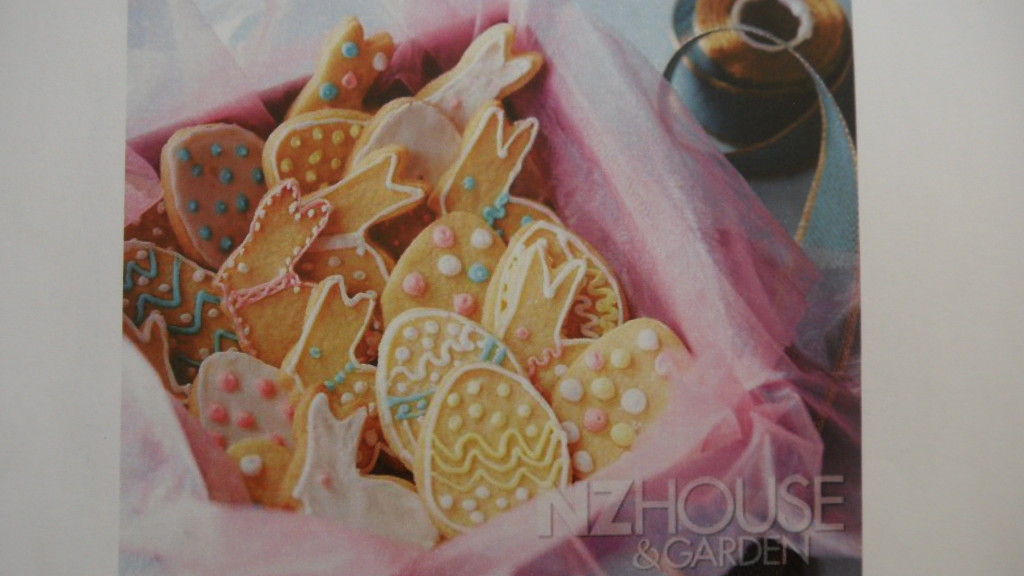 Cream butter and sugar until light and fluffy. Add egg and vanilla, beating until well mixed. Sift dry ingredients over and mix well. (If necessary, use your hands to bring dough together.) Form dough into a flat brick, wrap with plastic wrap and refrigerate for about 1 hour.

Heat oven to 175 degrees Celsius and line several baking trays with baking paper. Roll out dough on a lightly floured surface to about 3mm thick (a piece of baking paper placed over the dough will make the job easier). Cut into desired shapes, re-rolling and using leftover dough.

Place shapes on trays and bake for 8-10 minutes until cooked but not brown. Cool biscuits on wire racks.

Beat or whisk icing sugar and egg white together until thickened (it is ready for piping when you can drag the back of a spoon through the mixture and it will hold a peak; thin with a little lemon juice if necessary).

Divide mixture between small bowls and tint to desired colours. Pip or spread icing on cooled biscuits and allow to dry completely before storing in an airtight container. Biscuits will keep for up to a week.

Makes about 30 medium biscuits, depending on cookie cutter size.

Another Postscript:  Finding the implements

I had to spend a lot of time searching to get the right implements to make these biscuits. I found a good icing set (Wilton brand) that contains four icing nozzles and icing bags. I bought a separate small icing tip for piping the thin lines of icing on these Easter biscuits. The cookie cutters were more difficult to find. I thought Easter themed cutters would be available at this time of year, but they proved elusive for some time. Mum had a bunny shaped cutter but it was slightly rusty from being old and made of tin and I wanted other bunny shapes, eggs and chickens. I searched and searched and searched. I couldn’t find any. I asked around my work-mates in case they had or had seen any Easter-themed cookie cutters anywhere. No-one had, but I came away with a long list of retail shops to visit, which I checked off my list one by one, but came up empty. One work-mate took the quest to heart and went off in her lunch-break to search for the cookie cutters (thanks BJ) and I had work-mates asking around for cutters and keeping ‘an eye-out’ for some (thanks to everyone for their help and suggestions). How’s that for team-work? I couldn’t ask for better team-mates. Then DL came to work one day with a set of Easter-themed cutters she had found on her travels – there were rabbits and an egg among other shapes! At the same time another friend found an egg and two bunny shaped cutters in a cake shop in another town. At last a selection of cutters! I was glad I had prepared ahead and started the search early, if I had left everything to the last minute these biscuits would still be on the list for next year. Then, as luck would have it, with a day to spare (just when I wasn’t searching for them anymore), I found some Easter-themed cutters in a specialty kitchen shop when I was visiting Mum for Easter.

Here are the cutters we used, gathered from a range of sources: 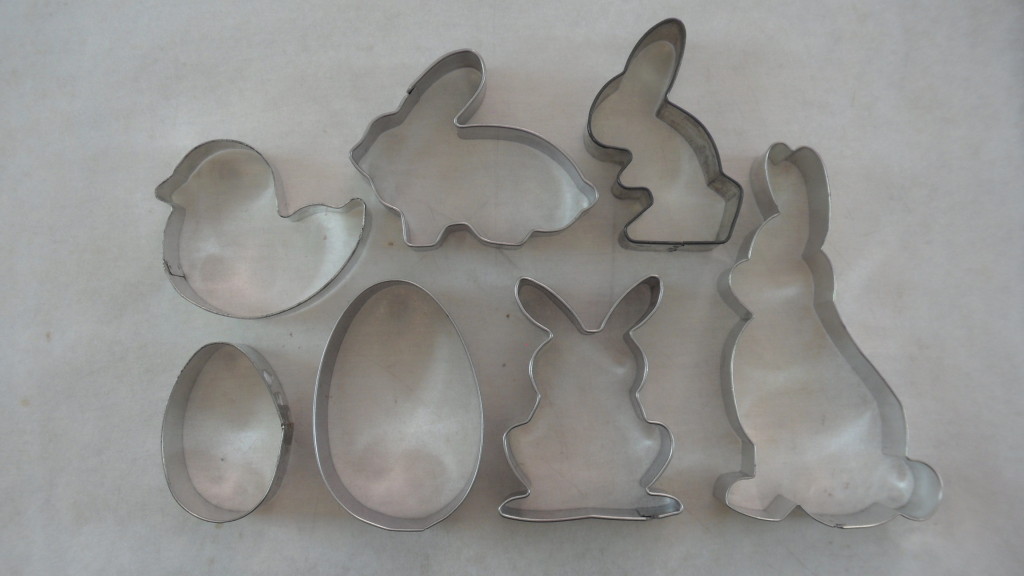 As a ‘thank-you’ I took a range of biscuits into work to share them and they were greatly admired. “Shifty-Bunny” is now famous after the work-mate who named him posted him to Facebook, where he was “liked”. He made it to the big-time and had his 15-minutes of fame. If he gets any more famous I will have to become his manager and give him a stage-name – “Bucky the shifty-eyed Wonder Rabbit” is quite catchy, I think.