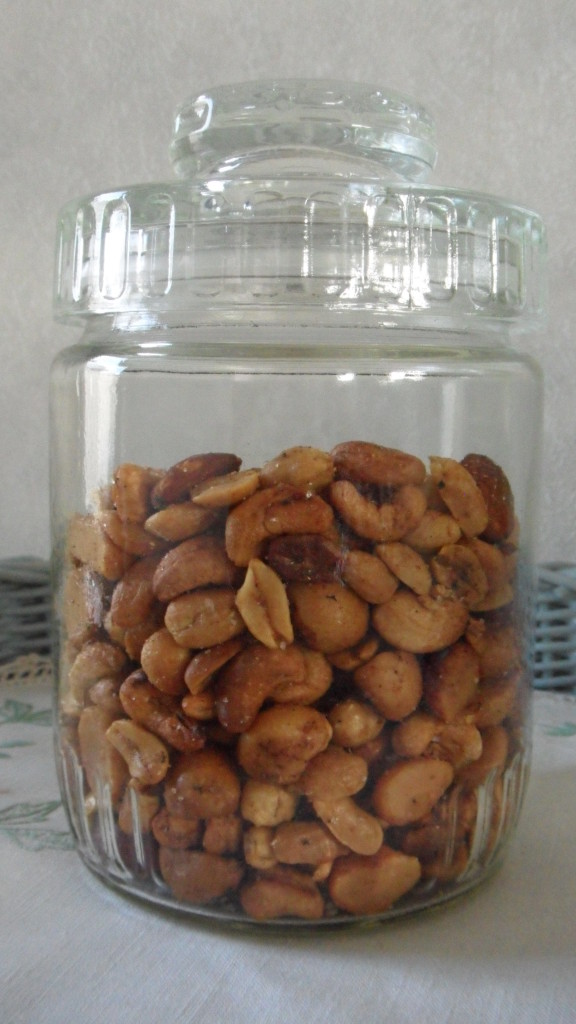 Because this mix tastes extremely good, the level of the nuts in the jar has dropped considerably from when we first filled it as we kept going back for another handful. As Mum or I was always caught with our hand in the jar, we came up with a saying “step away from the nuts!” in order to try to police the disappearing nuts situation. The great thing about this recipe is that as the nuts cool they taste better and better and it seems the longer they are kept the better the flavours.

I thoroughly recommend this recipe and they make good gifts too: 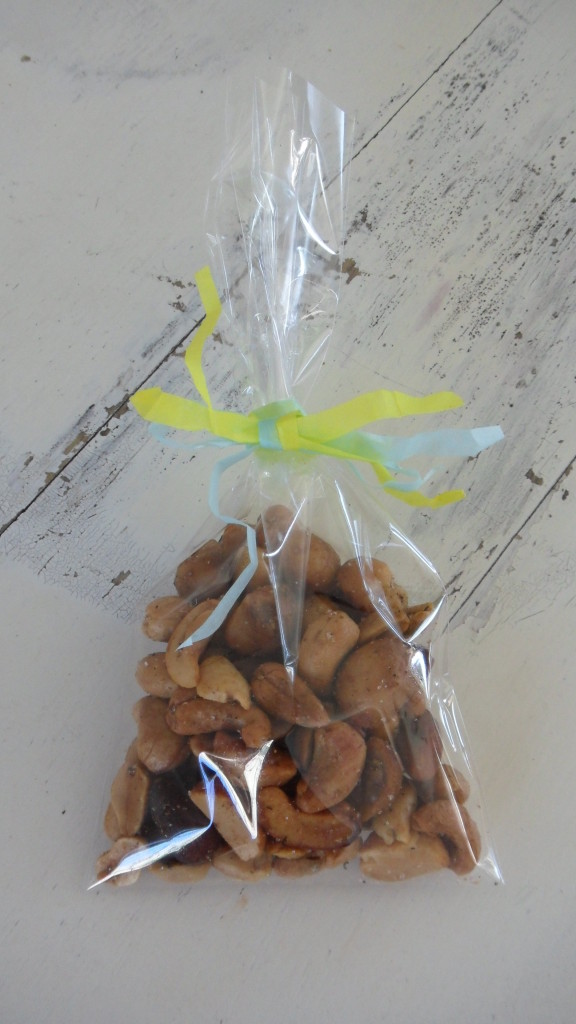 The nuts Mum and I used were: cashews, almonds, macadamias and peanuts (and a few pistachios). We didn’t have any soya bean oil, so we used canola oil. We used plain salt (not iodised). We didn’t have any fresh rosemary, so Mum went out to the garden and cut a sprig off the rosemary bush. This was chopped up very finely so that dried it was about ½ a teaspoon (rather than the 1 and ½ teaspoons of dried rosemary in the recipe, this is because our rosemary was very fresh and the taste is stronger). The fresh, chopped rosemary can be dried in the microwave for about 30-50 seconds, watching it doesn’t burn, or placed in the oven in a bowl to dry out while the nuts are roasting. We also found that placing the bowl in the sunshine does a good job of drying the rosemary.

This recipe is fairly expensive due to the nuts and the Cointreau and we found a cute little 50ml bottle of Cointreau to cut down on costs.

Whisk oil and Cointreau together. Add nuts and marinate for 15 minutes.

Spread nuts in a shallow pan. 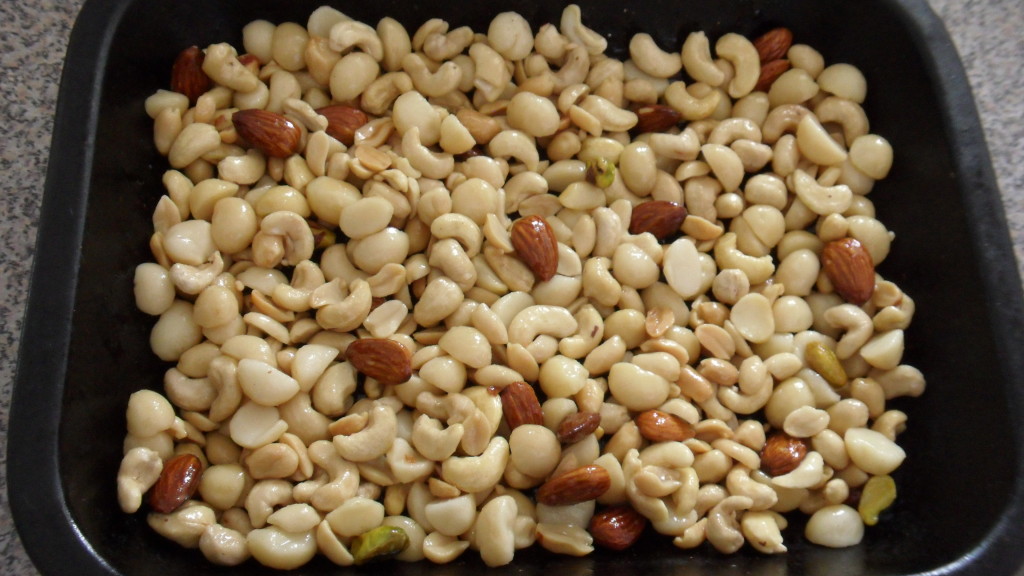 Place in a preheated oven at 180 degrees Celsius for 25 minutes until golden. Toss during this time to roast nuts evenly (we checked and turned over the roasting nuts every 5 minutes).

Combine spices and salt in a bowl. Toss hot nuts in spices until combined.

Store in an airtight container.

Roasted nut mix just out of the oven : 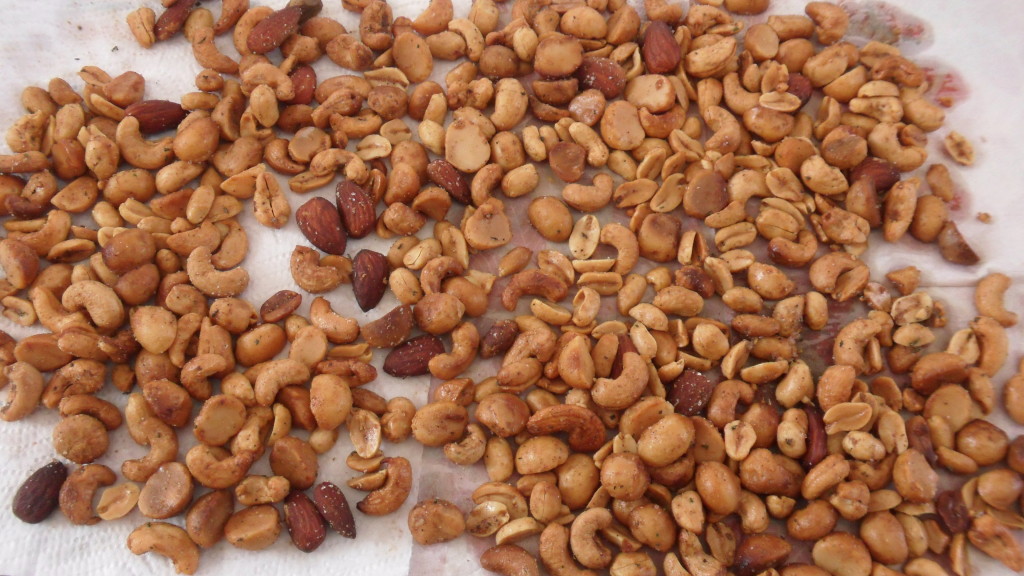 I really wanted to make this recipe over Christmas-time but it proved to be somewhat elusive. A friend, GS, had given me a special (secret) recipe for Spicy Walnuts, which I made and mentioned in the blogs “Spicy Walnuts” and “Impromptu Christmas Work Gathering”), she said she had another recipe that was much nicer, the Rosemary Cointreau Spiced Nuts, and said I should google Jo Seagar’s Cointreau Nut recipe. I did just that, but had trouble locating it. I searched all the keywords (Cointreau, Nuts, names of nuts, Jo Seagar) and in many combinations. What I didn’t possess was the actual title of the recipe. I knew it had Cointreau and Nuts in the name, but that was it. The next time I met my friend I mentioned that the recipe didn’t seem to be on the internet. So, she kindly said she would get me a copy. Christmas came around and everyone got busy and I didn’t have the recipe. I was visiting Mum and wanted to make this recipe, so we visited every bookshop we went past and searched in all the Jo Seagar cookbooks we could find. We visited all the libraries we had in the district and still came up empty. We began to doubt that the recipe was by Jo Seagar. I still didn’t have the correct (or full) title of the recipe, so this made searching even harder. After Christmas break, and back at work, my friend was then on holiday. So, she sent a message to another friend to type the recipe up and pass the recipe on to me (thanks to EJ for typing the recipe and passing it on). And so finally at Easter we made this recipe we had intended to make at Christmas. And it was well worth it.

As an experiment we tried an alternative to this recipe: Rosemary Cointreau Spiced Walnuts:

Mum had a bulk supply of walnuts in shells stored in the garage. So we sat out in the sun and shelled walnuts until we had 1 cup worth.

Since this was an experiment we only made 1/3 of the recipe and used :

This is how they turned out: 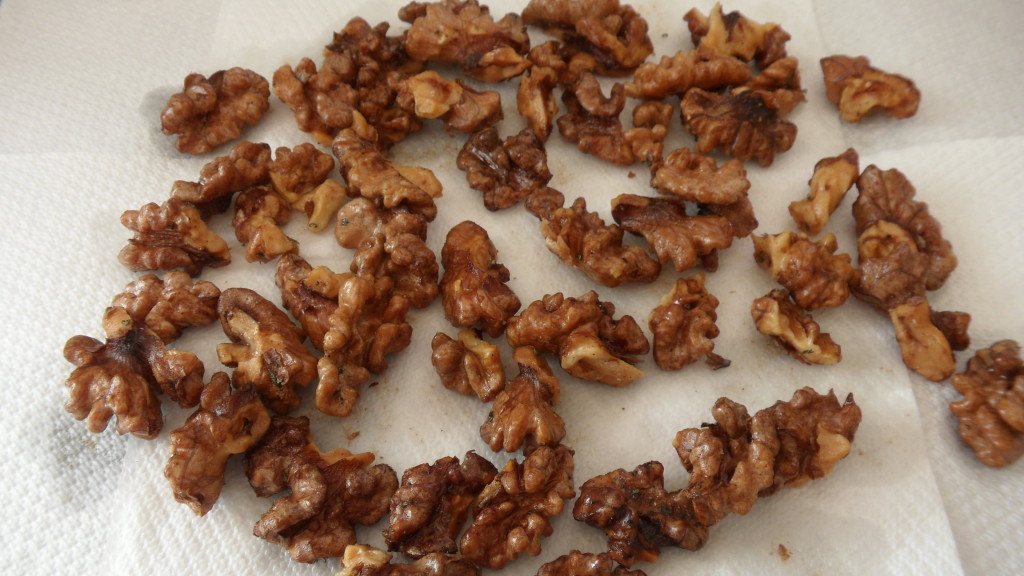 They look fine, but walnuts aren’t really the right sort of nut for this mix. They would be alright mixed in with the other nuts, but I would recommend leaving them out altogether. It was an interesting experiment to try, but unfortunately not as tasty as the original recipe containing a selection of nuts.

Since we had the Cointreau liqueur open, we made a Cointreau Fizz cocktail – see my next blog for the recipe.