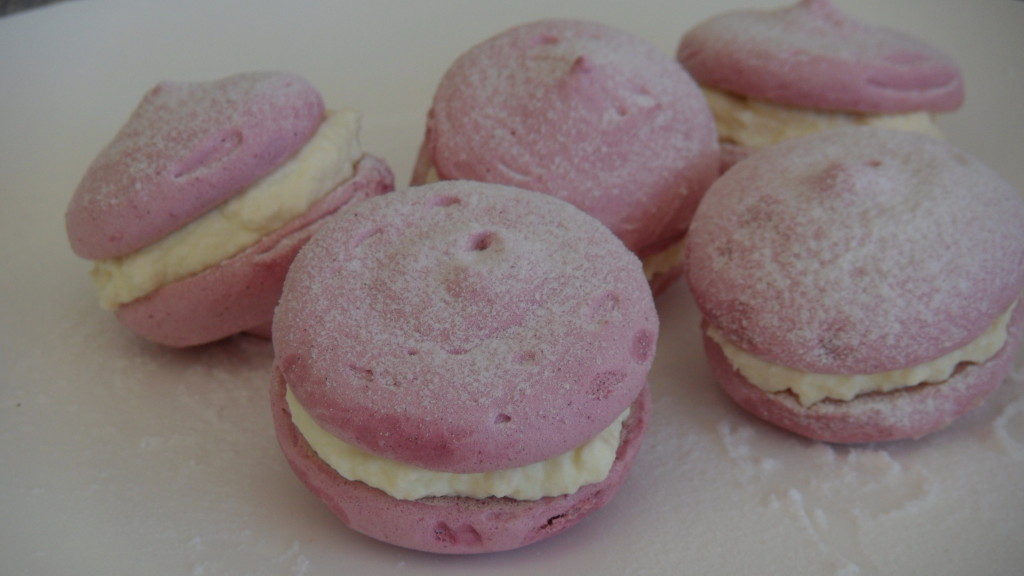 Raspberries and cream: such a great taste combination and a classic flavour.

When thinking of meringues, the usual image is of white, crispy, puffed shells. I have never been overly fond of meringues as I find the flavour of whipped egg white and sugar to be too bland and too sickly sweet.

Then my perception of meringues was changed forever thanks to a wonderful product by New Zealand company, Fresh As. The Fresh As product that we used in these Raspberry Meringues is pictured below: the re-sealable foil sachet contains pure raspberries which have been freeze-dried and packaged in powder form. 35g of powder equals 320g of real fruit. 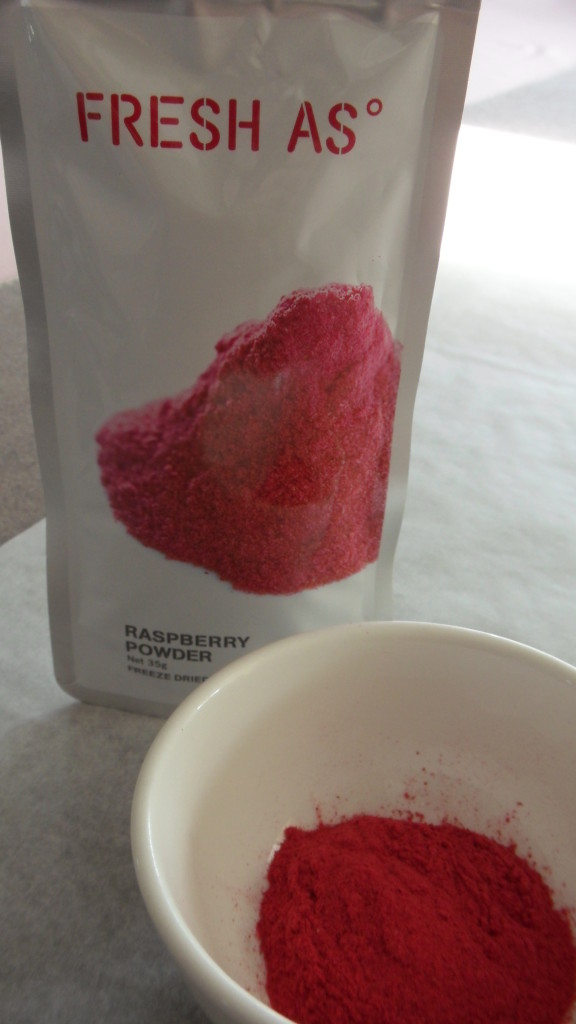 The following recipe for the meringues is quick to make (except for the cooking time), and the amount of cleaning up afterwards is minimal. Another plus is that the house is filled with the lovely aroma of raspberrys as the meringues bake.

Classic meringue recipes do not contain cornflour, but this recipe does (like in a pavlova).

Place egg whites into a mixing bowl and whisk with an electric mixer. When the egg whites are frothy or form small peaks, slowly add the sugar, making sure it is well mixed in before adding the next amount. Mix together the cornflour and the raspberry powder. Add this in slowly, and continue mixing until the mixture forms firm peaks.

The mixture. This tastes raspberry-tastic!! 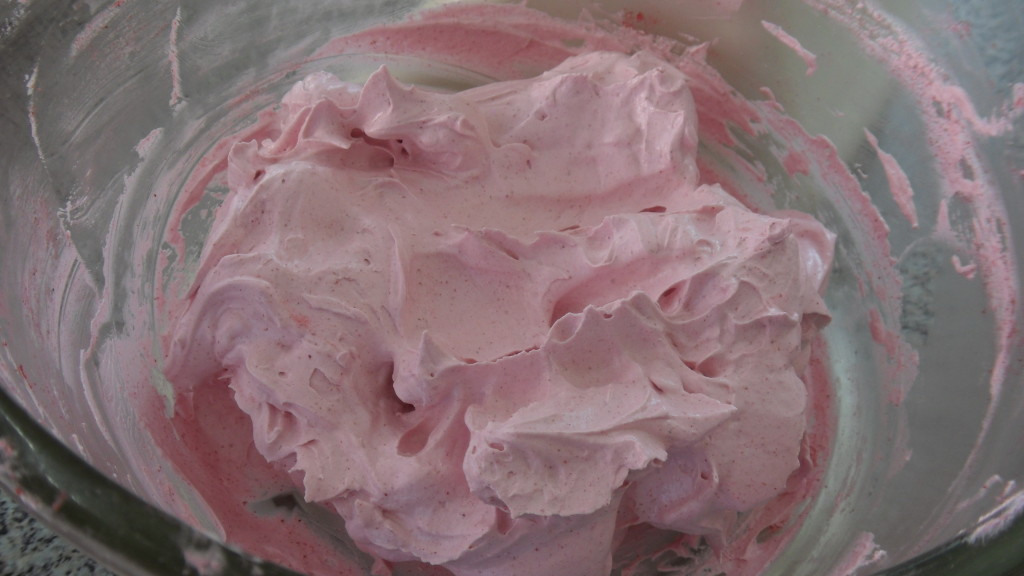 Place a sheet of baking paper on an oven tray. Place mixture in a piping bag with a large nozzle and pipe onto tray. These meringues won’t spread, but may shrink slightly.

[TIP: – create a circular mark on the baking paper to use as a guide-line to pipe the mixture to. Dip a circular implement (like a cookie cutter) into some extra cornflour and then tap it on the tray, leaving a white circle behind, and repeat. This is a good idea to get started, until you can pipe meringues all the same size free-hand]

These are the circular guide-line marks on the tray to be filled in with meringue mixture: 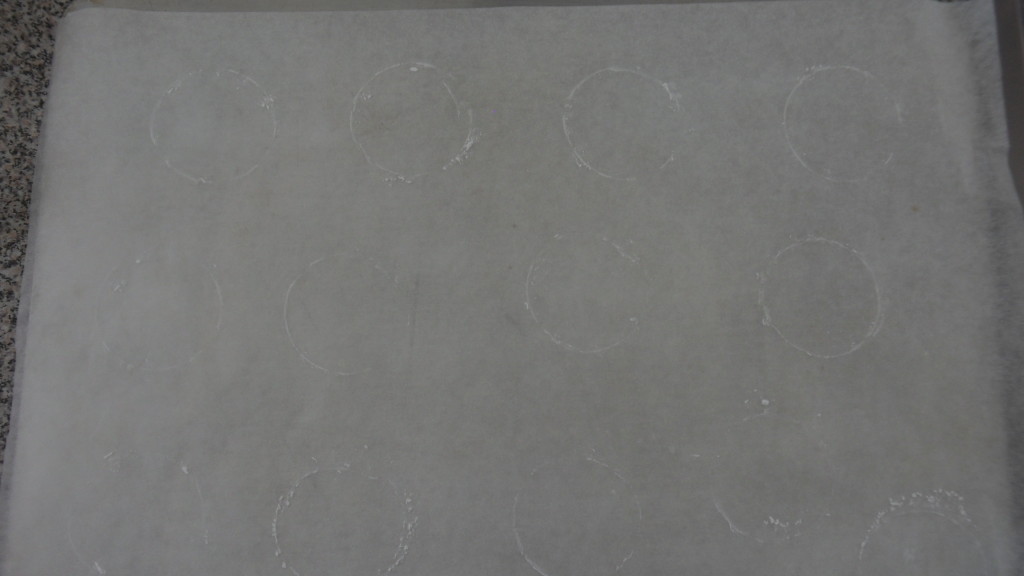 – Instead of mixing the raspberry powder in with the electric mixer, the powder can be swirled lightly through the mixture for a marbled look.

– If making plain, white meringues, add flavour and colour by mixing the freeze-dried fruit powder into whipped cream to use as a filling.

– These raspberry meringues would make a lovely pink Eton Mess. Crush up the colourful, berry flavoured meringue and mix into whipped cream then add fresh raspberries or strawberries.

I came across the Fresh As freeze-dried raspberry powder in a specialty food shop, Vetro. Choosing one flavour is difficult as there are many scrumptious flavours of freeze-dried powders to choose from: strawberry, mango, passionfruit, blackcurrant, blueberry, pineapple, lemon, apple, blackberry, raspberry and plum, all of which are 100 per-cent pure and additive-free. I am really enthusiastic about the freeze-dried product and now would like to use these powders in everything I make. They can be added to cakes, biscuits, meringues, macarons, smoothies, icings, and the possibilities are limitless. Fresh As also make a range of herb powders and freeze-dried fruits (such as mandarin and feijoa!!), and can custom make other flavours.

As for the flavour that the Fresh As powder gives to the Raspberry Meringues, one palindrome says it all: WOW. The taste is just fantastic. This concentrated fruit powder adds an amazing amount of flavour to the meringues, and has a huge impact on the taste-buds. Meringues will never be the same again! Not only does the freeze-dried powder add an intense flavour, but it colours the meringues with natural and healthy colours instead of using food colouring.

The raspberry powder also acts as a foil for the extreme sweetness of the meringue, this is because the fruit powder is slightly acidic and so it tones down the sweetness making the fruit powder a lovely match to flavour the meringue. Now I just cannot imagine meringues without it and I cannot wait to try another batch of meringues with other flavours of Fresh As freeze-fried powder.

Palindrome – a word or sentence that reads the same forwards as backwards. (I’ve always thought it funny that the word itself ‘palindrome’ doesn’t read the same backwards and forwards. Although the world is full on anomalies, and this is just another such anomaly.)

I did a few experiments on humans for taste-testing purposes and all my experiments revealed the same thing. My taste-testers find the meringues are bursting with more flavour than they realise. Another thing that my taste-testers had in common when they tried these meringues is that they displayed the same reactions and facial expressions, which I have found to be both interesting and amusing at the same time. There are two stages to the tasting process – first, the palate instantly receives intense raspberry flavours and the initial reaction, is “this tastes GREAT!”, then secondly, the flavour really hits the taste-buds: people’s faces lift in surprise – there’s an “oh, WOW!” reaction, “these taste really REALLY GREAT”. This is all thanks to this amazing freeze-dried fruit powder.

I have been day-dreaming about a plate of multi-coloured and multi-flavoured meringues as part of a high tea. I can imagine they would be the stars of the show as they would not only look stunning, but would provide a taste sensation. The freeze-dried powders would provide an array of colour/flavour combinations, such as purple = blackcurrant, yellow = passionfruit, orange = mango, red = strawberry or raspberry, to name a few.

Next time Mum and I make meringues we are going to experiment and try a different meringue recipe (a classic one) with a different flavour freeze-dried powder. In preparation we consulted Mum’s set of Cordon Bleu recipe books, (Cordon Bleu always has the final say on all classic recipe matters like this). The Cordon Bleu oracle says that ‘Meringue Suisse’ never varies in the proportion of sugar to egg white. It is 2oz of caster sugar to each egg white which is stiffly whipped before the sugar is folded in. Another meringue recipe we are considering is one that my Grandma used. So our next meringue project will be either one of these recipes with another freeze-dried powder. I can’t wait.

Credit for the idea for the Raspberry Meringues goes to the Restaurant Merediths in Auckland. I saw the original recipe in a Taste magazine (April 2014, issue 100). We referred to this recipe, but changed most aspects: we halved the recipe, added a pinch of salt, whisked the eggs differently, and shortened the cooking time, plus used whipped cream as a filling instead of marscapone.