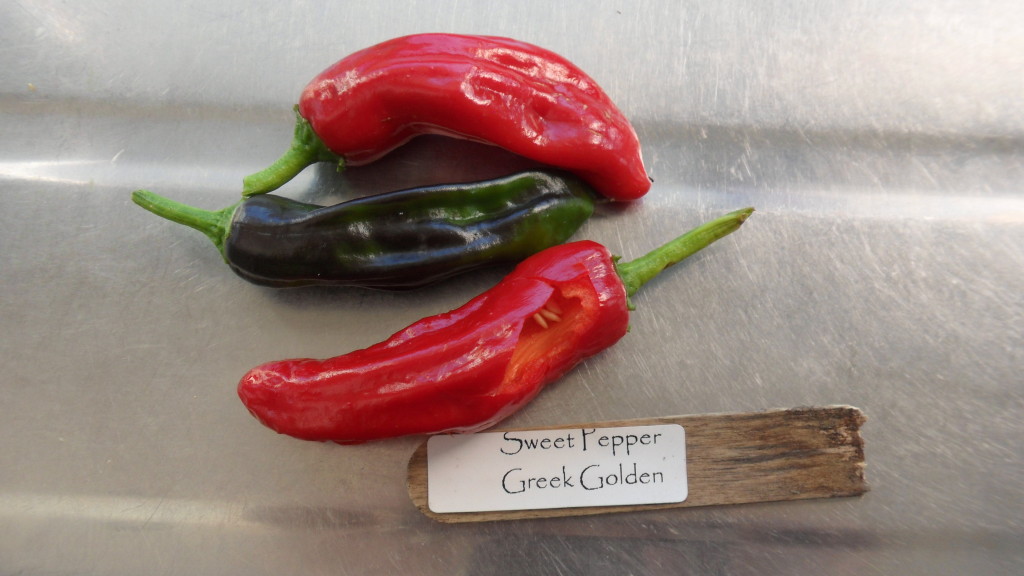 Mum bought this plant in late October 2013 at the Hastings Farmers’ Market (which I have mentioned in the post titled “Spring Farmers’ Market”). What we want to know is why are these called Greek Golden? They are green, and a purply black, and a bright red (as seen in the photo) but at no stage during the growing or ripening were these yellow or ‘golden’ as the name suggests they should be. Plus they weren’t particularly sweet, as the label said either. Can I safely presume that the word ‘Greek’ in the title means they come from Greece? Another question we had was: is this a pepper or a chilli? They looked like chillis due to their size and shape, and they have a slightly gnarled appearance to the skin which suggests a hot chilli, but when we tried them they had no heat and are more like a capsicum in taste. Because we are curious, we trotted along to see the grower we bought them off, who was at the Napier Farmers’ Market on a Saturday morning. He answered our questions that the colours are indeed correct and yes, this is a “Greek Golden” – the name is just a bit misleading, and it is a capsicum rather than a chilli.

Anyway we added them to a Ratatouille where we used the red ones to add colour to the dish, rather than for taste or chilli heat (see my next post for this recipe).