When Mum buys a packet of eggs, the first thing she does is to pencil the use-by date on the top of each egg before placing them in the egg tray in the refrigerator. When Mum and I arrived home after a supermarket shop, I ‘prettied’ these eggs up a bit by adding faces (and in the process forgetting to write the date on). No matter though as they were used up quickly with all the baking and cooking we did. 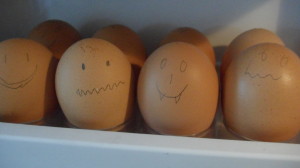 Out of a packet of 6 eggs, they were used thus:

The ‘Vampire-Egg’* appropriately went into the blood-red coloured Red Velvet Cupcakes. The egg with the ‘wibbly’ mouth (trepidation about its fate maybe?) was boiled (he tasted good for breakfast with Marmite toast). Two others went into what Mum dubbed “the yellow breakfast” (yellow scrambled eggs, scrambled in yellow butter, topped with yellow cheese, and yellow tomatoes on the side – the Hawke’s Bay Yellow variety). The last two eggs went into the Spinach and Cream Cheese Gems (see a previous article of mine for the recipe).

While we are on the subject of surprises, another ‘surprise’ I have given Mum is to go about naming her wooden pegs. They have names inscribed into the wood such as: Peggy, Peg-Leg, Miss Peggy, Peggy-Sue, Pegasus, Peggley, Peglet. Over the years these have been appropriated for other uses such as used in the garden, or have found their way into the pantry and even the freezer, used as clips to keep packets and bags closed. So I have a few other ideas to bolster up the missing numbers of named wooden pegs: Peg-alicious, and Peg-osaurus. Look out for these ones Mum, coming to a peg-bag near you very soon!

* I drew the Vampire Egg first, so this tells you something about my mind-set from watching too many movies and TV series containing Vampires. I am not going to go as far as calling Vampires ‘myths’ because it depends on what reality you live in.  I spent a whole weekend immersed in a season of The Vampire Diaries (all 22 episodes) on DVD, and after all these episodes, Vampires become real. When I emerged into daylight to go to work, I actually checked to see if I was wearing a special “daylight” ring on my finger so I didn’t vaporise in daylight. That was a bit of a reality check! I spent the rest of the day in a daze, worrying about sunlight exposure. This has happened multiple times as I have watched all the episodes from seasons 1-4 now. I am currently watching The Vampire Diaries spin-off TV series The Originals, so I will see how I go with that. Thank goodness I didn’t develop a lust for blood (although I did wonder how Vegetarians get on when they are turned into Vampires. This question has been only half answered as seen in the movie Only Lovers Left Alive, and to a certain extent in the Twilight books and movies, and a bit in the Vampire Diaries too, although just because some of the vampires don’t kill humans for their meals, this doesn’t altogether make them ‘vege-vamps’. I am still seriously worried about the true vegetarian menu options).

I found out this immersion in alternate realities is not unusual. Over a weekend, a colleague watched a whole season of The Killing (in Danish with English subtitles) and came to work on Monday thinking she could speak Danish. She gave us a convincing demonstration of her new found skills with the Danish language. I watched the Danish crime drama The Bridge and I had the same experience so I know how she felt, but from The Bridge I picked up not only Danish but Swedish as well. I realise I watch too many DVDs and watch too much TV, but it is all for reasons of studying Social Sciences, Media Studies, and Pop Culture of course.