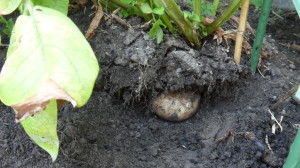 This was Mum’s first experience growing potatoes, and now she wishes she had done so earlier. This all came about when some potatoes in Mum’s pantry started to sprout shoots and she decided to put them to good use. Mum put the sprouting potatoes aside in the garage for a week to let the sprouts grow larger. The table at the end of Mum’s garage was ideal because they need warm, light conditions for the potato eyes to grow shoots. When the shoots are 3 cm long they are ready to be planted out into the soil. The potato tubers can be planted whole or cut into pieces as long as each piece contains at least one or two eyes. When the potatoes are planted out, they need to have soil heaped into a mound over the tubers, as they like to be buried deeply and this provides perfect conditions for more potatoes to form. Mum planted her sprouting potatoes around the 20-21 of October, after having consulted an Australian Women’s Weekly magazine to find the peak time to plant root vegetables according to the moon phases.

Mum was determined that we would harvest the potatoes when I was staying with her so I could experience a meal of freshly dug new potatoes with melted butter. The first potato harvest was in the second week of January. The second harvest was into the fourth week of January. We were new to this potato digging and had been unsure as to when to dig for the potatoes – do we wait until the white flowers die back, or do we dig them when the flowers first appear? Mum decided to do a hands-on test and dig around the base of the potato plant to check if the potatoes seemed ready. Mum calls this “tickling the taties” (tickling the potatoes). “Come on, let’s go outside and ‘tickle the taties’”, she said. Mum put on a glove and dug about in the mound of soil feeling for potatoes and found several good sized potatoes.

Mum with her rubber glove on “tickling the taties”. “You don’t need a photo of this”, she said, but here’s the photo anyway. 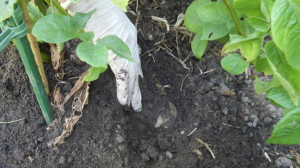 After she had finished digging (tickling) for potatoes, she heaped the dirt back into a pile around the roots of the plant to encourage more potatoes to grow.

The harvest. Photo and food arrangement by Mum! For this photo shoot she arranged the potatoes on a nest of cut potato foliage (I may have encouraged her too much with food photography in general as I wasn’t even around when Mum took these photos – what have I done? Help, I’ve created a monster). 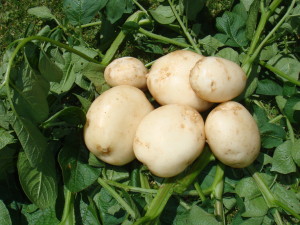 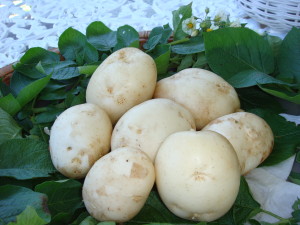 The potato skin scraped away easily with a knife to reveal creamy coloured clean potatoes.

The scraped potatoes in the pot ready to be boiled. Another one of Mum’s photos. We boiled the potatoes whole with a sprig of mint added to the pot and ate them simply with butter melting on top. 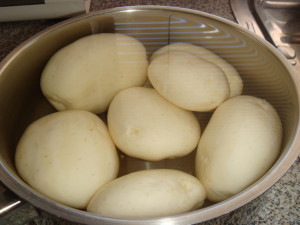 I couldn’t believe how good freshly dug potatoes tasted – the texture is so soft and creamy. I had never eaten such fresh potatoes before and by the time we ate these for dinner they had only been out of the ground for about 4 hours. Forget shop bought potatoes, freshly dug is by far the best. Serving the freshly dug new potatoes simply boiled and dressed plainly with butter is the best way to have them as any extra flavours would mask their freshness.

Mum really enjoyed growing potatoes and wants to plant more next season, and I highly encourage and recommend this.

A funny little story resulted from harvesting the second lot of potatoes. Mum lost her glasses. We searched everywhere for them. We knew they were around the house somewhere, but where? We looked in all those places that they could have got to, under couch cushions, down the side of the couches, in pockets of jackets, in the fruit bowl, in the pantry, we even searched through the rubbish bins, and some weird places such as in the fridge. Mum said we would have a great laugh when we eventually found them because they must be in a really strange place. By the evening they still hadn’t turned up. I said we should check the garden again before it got dark “just in case” by some weird turn of events they had got there. The garden was literally the last place they could be as we had turned everything else upside down in the search. I was standing looking at the potato plant and a thought ran through my head that the glasses may had fallen off Mum’s head when she was ‘tickling the taties’ and may be buried in the mound of dirt at the base of the potato plant….when I saw something glinting in the evening light. I couldn’t believe it – there were the glasses, caught halfway up the potato plant foliage! I had to look again to make sure I had seen correctly, but it was the glasses. I was laughing so hard I could barely call Mum over and had to gesture for her to have a look. Mum was right – we did have a great laugh about it.

A little something else about potatoes :

An interesting fact is that they add nitrogen to the soil. Mum’s advice on creating a lovely lawn is to plant potatoes before planting grass seed. This ensures that the grass will grow well, as the soil is broken up by the potatoes and the soil is rich in nitrogen.

This little nugget of knowledge is first-hand as Mum told me that when she was a young girl, she was paid by the bucket load to remove rocks from a relatives backyard so they could plant potatoes before they planted their lawn. Also after the Hawke’s Bay earthquake of 1931 lifted the drained the land many people planted potatoes in their front and back gardens as they needed to create fertile land again after the landscape was disrupted and dramatically changed.