Blueberries picked on one day.

This year has been the best ever blueberry season for us. We have three blueberry plants – two we don’t know the variety of, but we do know that one is called ‘Tasty Blue‘, but which one is it? We don’t know – the labels blew away and got lost. We have had the plants for about 6-7 years and the harvest so far over the years goes :– two berries, none- (the birds beat us), none (darn birds again), none (those birds!!), some, a handful, and then this year was an extravaganza as we have had a large harvest early in February, then a huge harvest (see photo above) on 20th February, and there is still more to be picked.

There are multiple reasons why we had a bumper crop this year :

As for the problem with the birds – the daring clever winged scoundrels were letting themselves into the enclosed netting area to get at the blueberries, essentially trapping themselves within the netting, filling themselves with berries, then letting themselves out again. I watched a blackbird do this, but I didn’t want to scare the bird or it would have panicked inside the netting enclosure and could have hurt itself. I waited until it had safely left the netting enclosure, then I sealed the gap with a peg. (The animals here seem to be fearless and clever – see an earlier blog of mine showing a picture of a rodent I hanging upside down to eat the pepino fruit.) The blackbirds show that they are totally fearless not only by entering the netting enclosure, but also when they ignore my attempts to shoo them off the berries. When they are outside the netting pecking through it to get at the berries, I tap on the window to warn them off, but they just look back at me, cock their heads to one side and stand there defiantly as if to say “Yeah, whatever, we’ll do as we please”, and they go back to pecking the blueberries. Maybe I just don’t look very scary (which is a compliment in a way) and they play on my lack of ability to ever hurt them. Possibly, and most likely, is that they think we grow the blueberries, strawberries, blackberries, Macqui Berries, and currants for their dining pleasure, it would be nice if they left some for us.

We juiced a watermelon : 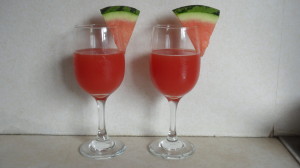 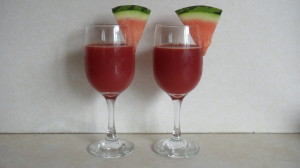