And the winners are (this is all my humble opinion) :

2011 seems to have been a great year for wines as my favourite three are all this vintage. I feel very lucky that these wines are all made locally.

Esk Valley, Gimblett Gravels, Hawkes Bay, Merlot Cabernet Sauvignon Malbec, 2011. This is my top pick out of the wines I tried in 2013. This is a wine I want to remember. 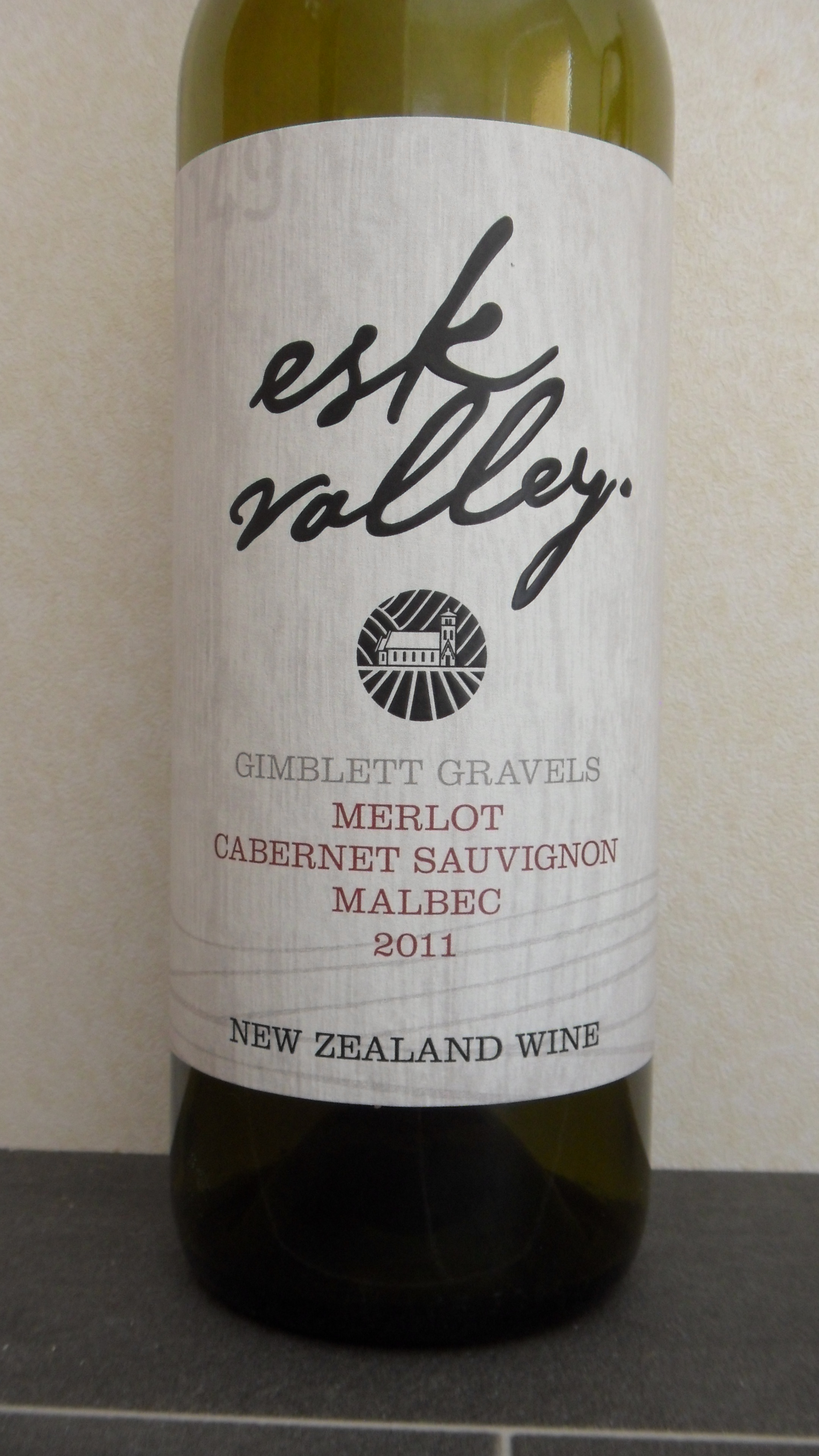 This was a really tough choice to decide between the second and third placings as these are wonderful wines. But the winner was an easy choice – it had to be Esk Valley.

First choice: The Esk Valley, Gimblett Gravels, Merlot Cabernet Sauvignon Malbec, 2011 is a nice ‘happy sunny wine’, as I like to think of it. This wine was very red and had a high degree of mouth staining. I have a great fondness for this wine and have had several bottles of this, but now, sadly, the 2011 has all gone from the shelves as far as I can see, but I keep searching in hope. I have tried the Esk Valley, Gimblett Gravels, Merlot Cabernet Sauvignon Malbec, 2012 and this won the Pure Elite Gold award at the New Zealand Wine Awards, 2013. I agree it is a stunning wine, but I would like to cellar it for at least a year, and hope it is as enjoyable as the 2011.

My second choice is Squaking Magpie, Gimblett Gravels, Hawke’s Bay, The Chatterer, Syrah, 2011. I keep a notebook of recipes and scribbled notes from when I am cooking with Mum, and stuck to the cover of this, in pride of place, is this wine bottle label. Looking through my notes, I see that we went through three bottles of this wine. I also made a note that this wine won the 2012 New World Wine Awards Gold Medal.

When I bought a Squaking Magpie, Merlot, 2012 recently, I was amused to see on the docket : SQUACK MAG CAB. I thought this was hilarious.

My third choice is Moana Park, Hawke’s Bay, Syrah, 2011. I could drink it by the barrelful, (if it wasn’t for alcohol poisoning). It is a purely lovely wine and it is a wine that is just so easy to drink.

The Moana Park, Merlot, 2013, is also nice, but I think because it is a new 2013 wine, it could be cellared for a year or so, and it’s not really fair to judge it until it has had time to mature. So, all in all, this may be top of the list next year.

As a little side story,…one Boxing Day my family and I went on a drive out to Moana Park winery. For some time I had been wanting to investigate the specialty wines produced there. I have breathing problems after some wines, and as Moana Park’s wines contain minimal amounts of the troublesome sulphites, any Moana Park wine is a wonderful wine choice for those who want to avoid the shortness of breath suffered due to the preservatives in some wines. We met winemaker, Dan Barker. He was very helpful and explained a lot of the science behind sulphites and winemaking. He also explained the reds would have less sulphites than the whites, so I chose to buy a Merlot, a Syrah 2011, and a Merlot Malbec. Mum bought a Pinot Gris, 2012. He gave us an insiders tip that if we wanted to stock up on more wines, but didn’t want to make a long trip out to the winery, we could purchase the wines from a local liquor outlet in town, but, only at the one local liquor outlet, and we would have to ask for the wines as they are not displayed on the shelves. Using our insider’s knowledge, we have paid several trips to this store. As another little side story….this last Christmas I had a happy and welcome find in the back of Mum’s pantry. I discovered a bottle of Moana Park wine hiding there – still wrapped in its grey tissue paper wrapping, done up with the Moana Park sticker. I joked that unwittingly, Mum had “cellared” it for a year. It is a 2011, so it should be very nicely matured by now.