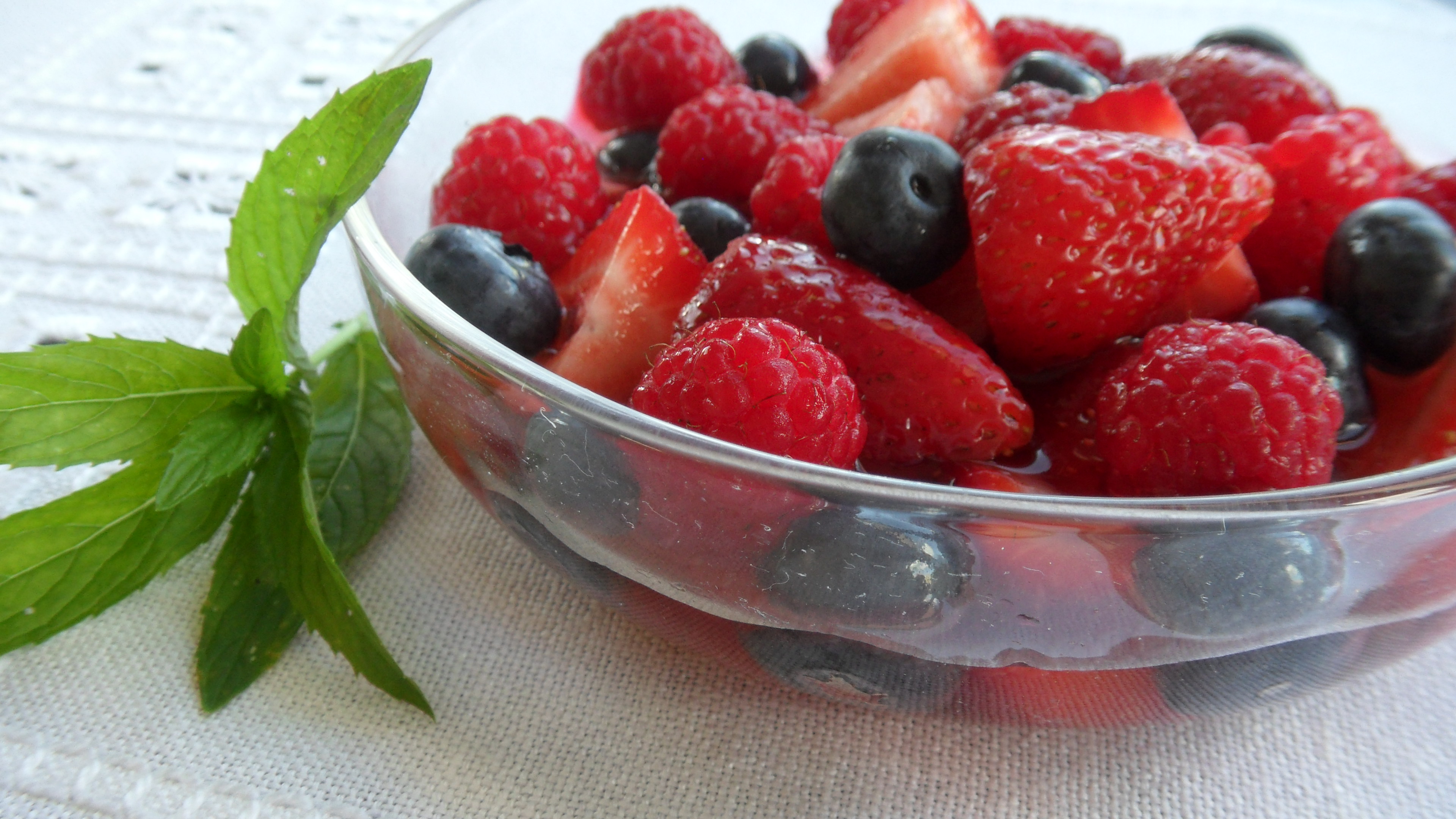 Cut strawberries in half (or use whole strawberries). The raspberries were added from frozen as they stay together longer before breaking apart in the liquid. The blueberries are a nice addition, but their skins do not allow the elderflower cordial to soak into them.

Add a mixture of ½ elderflower cordial and ½ water. Let steep in the fridge for at least two hours to allow the elderflower flavour to soak into the fruit.

Mint can be added to the bowl as well. This gives a lovely extra flavour freshness. Either cut up the mint into small pieces and leave them in the bowl, or add halved mint leaves to infuse the flavour and remove the pieces before serving.

This is really nice when left to infuse in the fridge overnight, as the next day the liquid will have taken on a beautiful berry taste, and in turn, the cordial will be infused into the berries which gives them a delicate sweetness. I preferred this dish after it had been sitting in the fridge for a night as all the flavours have had time to blend. Also the strawberries are softer. The raspberries will have broken apart, and this adds to the flavour. By this stage, the colour of the liquid is amazing – it turns a lovely shade of pink and looks very very pretty. When the berries and cordial have reached this ‘complexity’, it is great for breakfast mixed with other fruits, with a bit of yoghurt and other toppings.

This is the bottle of elderflower cordial we used. I mentioned it previously in the piece entitled “Raspberry Picking 2013”. 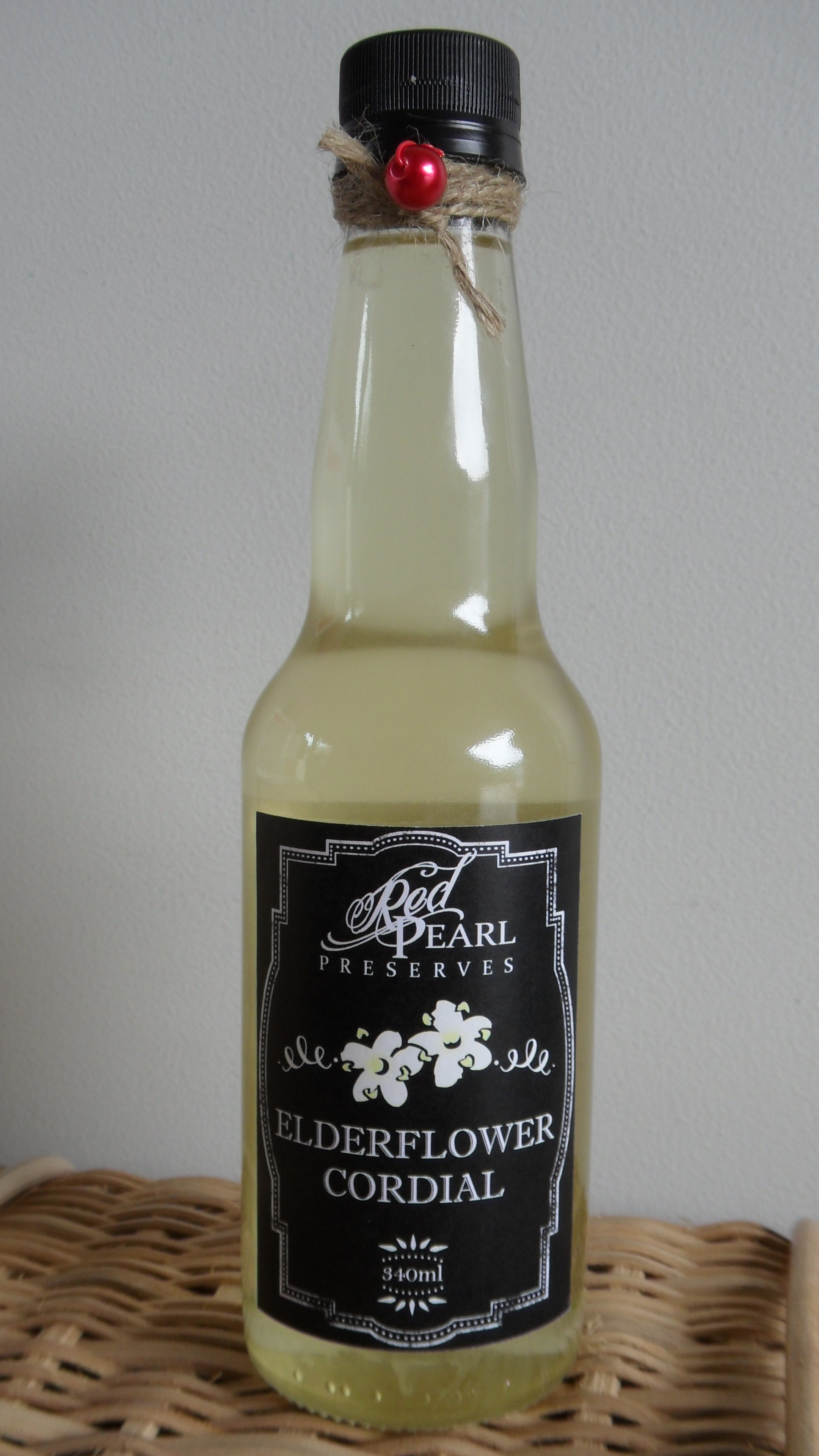 It is made locally by Red Pearl Preserves. This is a pure product with no preservatives, artificial colours, flavours or sweeteners  which means it has to be refrigerated after opening and used within a few months.

Elderflower cordial has a very sweet taste, like honey or icing sugar with a hint of lemon.

We made drinks by diluting the cordial in water – 1 part cordial to 5 parts water. Adding iceblocks made this a very cooling and refreshing drink on a hot summer’s day.

I think for a bubbly drink, instead of lemonade, the cordial would be nice with sparkling water or soda water.

The cordial can be set into jellies, poured over pancakes, used in drinks and liqueurs, over lemon sorbet, over fruit salads, and a classic pairing seems to be elderflower cordial and gooseberry.

After some research, I have found that the main ingredients to make elderflower cordial are: elderflowers, lemons, sugar, water, and citric acid. Sometimes ascorbic acid is used instead (this is because in Britain citric acid can be hard to find as it is used by heroin addicts, and pharmacies and other outlets keep it behind the counter or don’t stock it at all.)

This was the first time Mum had tried elderflower cordial, and I had tried it for the first time at my friends party (see: “Impromptu Christmas Work Gathering). Mum and I would like to try making our own elderflower cordial, but we have to put some research into sourcing some elderflowers first. I have been told that the elderflowers are harvested when they are in full bloom, early in the morning, after the dew has dried – which sounds very pastoral and idyllic, and like it comes from an old-fashioned traditional recipe.