Raspberry pick Number 1 : the day before Christmas (the mad rush)

Mum’s alarm went off at 5.50 am. I didn’t hear a thing. Mum thought I would have and I am woken by her standing at my bedroom door saying “aren’t you coming raspberry picking?”

I grabbed whatever clothes I could find in my travel bag, got dressed and got straight into the car.

Just after 6 am we were on our way to Ruby Glen berry farm to pick fresh raspberries for the Christmas trifle. When we arrived there were lots of cars already. We parked on the grass verge and sat in the car for a while, and ate a banana for breakfast. The queue of people was almost to the roadside, so we judged it time to join in. We had a bit of a wait until 7 am when the berry farm opened, but it was a nice warm morning, so it was ok just waiting in the queue. This is something that Mum likes to do every year the day before Christmas. By 7 am so many people had turned up that we were divided into groups to pick on different rows of raspberries. This year there didn’t seem as many to pick, plus with crowds of people, I found it hard to pick many berries at all. “The picking’s good here” I heard someone say from another row, so my ears pricked up at this and I took note, and went to have a look. But it wasn’t any better than the row I had been in, unless the person who said that had taken all the fruit already. I lost Mum somewhere in the raspberry rows, and couldn’t remember what she was wearing – there were long rows, lots of people and long raspberry canes bowing over some rows, so I found it difficult to find her. Oh, there she is, wearing bright pink no less – at least she stood out.

At the end of our pick we didn’t manage to get much between us at all, but we had enough for the trifle, which was the main thing, and it was much cheaper to pick our own than buy them in the supermarkets. As we were leaving, many more peole were just arriving with big containers. Even though, technically they were early, at 7.30 in the morning, it was still too late for them as most of the berries had already been picked. Although, we saw many people down rows that were closed off to the public – they were happily picking away, and probably getting more berries than anyone else.

Mum and I decided on the spur of the moment to go for another raspberry pick. We got there early afternoon, but the pick had closed at 12 pm. It had been raining on and off all day, so not really the best day to pick raspberries anyway. The owner told us that raspberries have been early this year, and the crop would be finished by the end of December. The final pick from this crop would be in 2 days time, so we could come back then, or later on in the summer there would be a different variety of raspberry fruiting.

The owners have had people coming in looking for plums, but the season for them was early this year too, and the plums have been and gone. We had a very hot December with temperatures experienced in this region which were more like the temperatures we usually get in January and February. Even in October temperatures were higher than usual.

I had waited for this pick for a whole year. This is away from the mad rush of the picking just before Christmas day, and it is more relaxed.

This was the last pick of the season. We arrived just after opening time at 8 am, and were there for just over an hour.

I had a lovely time. The weather was perfect for raspberry picking. This region is known for its blazing hot sun, but today was slightly overcast, and it was a still windless day. The rain of the day before had stopped. But you could tell it was going to be a hot day later on. It was nice conditions for picking.

Raspberry rows and the dewy grass: 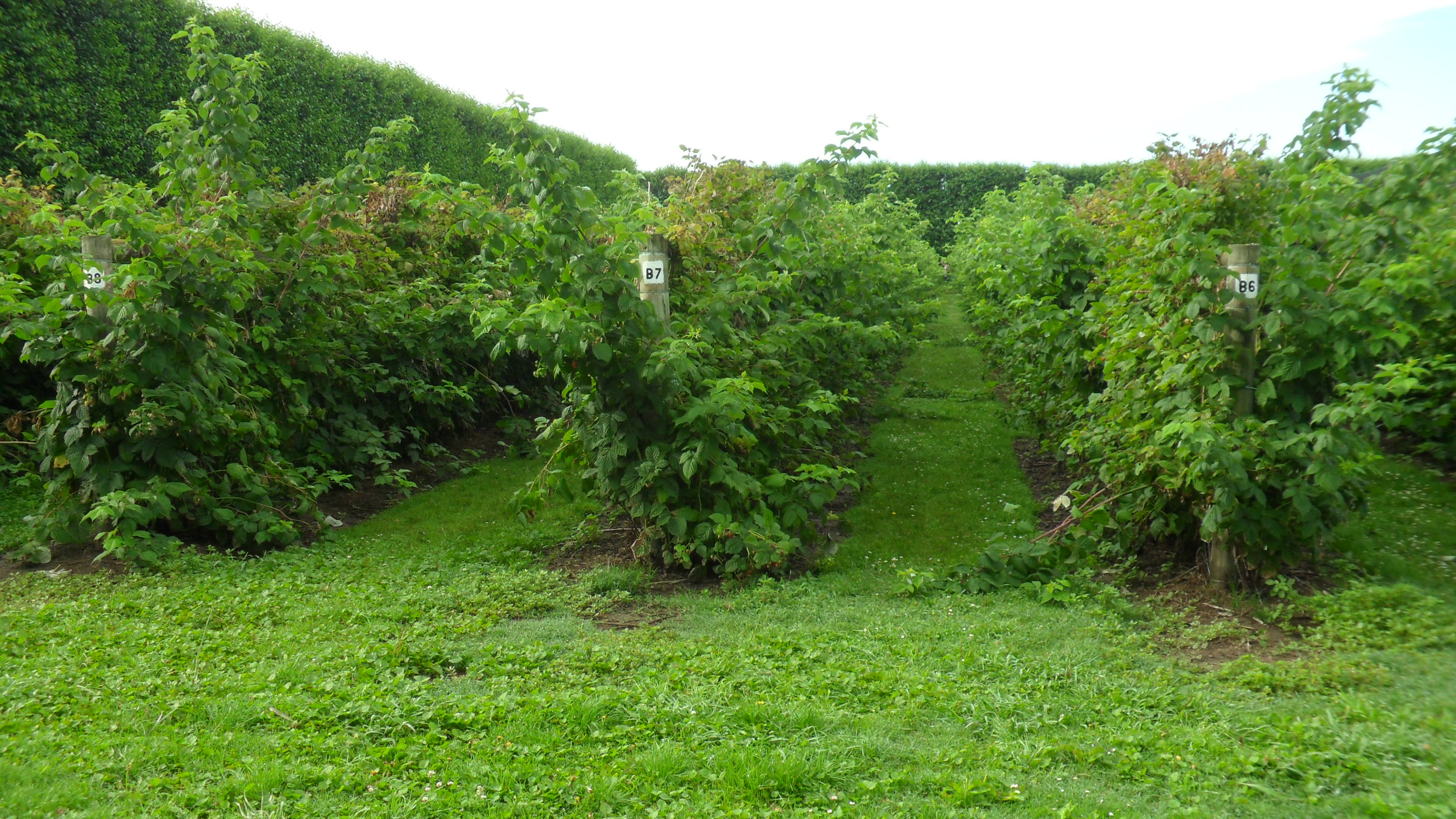 Everything was still and quiet except for the birds chiruuping away happily. I could also hear doves cooing. I love the quiet contemplative time during raspberry picking on days like this. When you have a row all to yourself, and you can quietly wander along. I like the long raspberry canes falling over the rows. When you are crouching down picking raspberries you feel enclosed in nature with a bower of canes overhead and you can look up and see bright red raspberry drops handing off the canes, all the while listening to nature and your own thoughts. 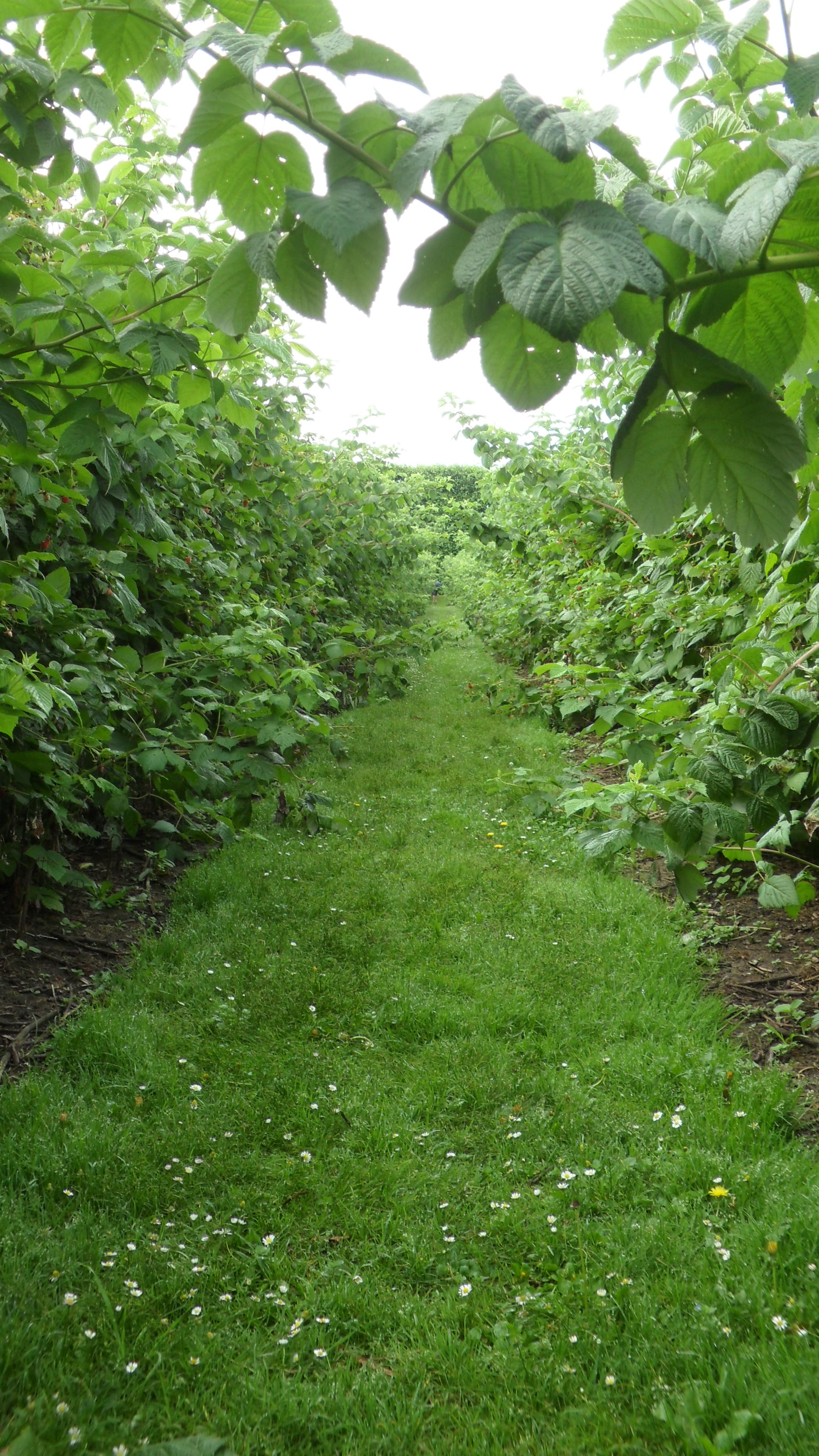 Raspberry cane bower. Mum is further down the row somewhere.

Voices carry over the rows every now and then. Sometimes you can hear people’s life stories as their conversations carry on the breeze. Once someone asked if there was a name for the plastic bit at the ends of a shoelace, and Mum called out “Aglet!”, into what was a private conversation.

Mum was off down the row next to mine, and even though it was really still and quiet, Mum and I passed each other with only a row of raspberry canes between us, and didn’t hear or see each other.

When we did, we decided we had enough raspberries, and also our shoes were sopping wet, and our feet would be all wrinkly in the water. The rain the day before had left the ground sodden and the dewy grass added to the dampness. I haven’t experienced the ground so wet for a raspberry pick before. The weather has been very different this year with unusually wet weather around Christmas (which was very much like Spring weather), earlier hot temperatures and early fruiting.

We had our berries weighed at the counter and while we were there, spotted a bottle of Elderflower Cordial. We were told that it is the biggest counter product seller they have. The cordial is made locally by Red Pearl Preserves. Mum and I have never tried Elderflower Cordial and have been wanting to, so we bought a bottle for $7.00.

Our berries were much cheaper than buying them in the supermarkets. Our containers weren’t weighed before we went picking (tare), like usual, but I guess they take into account the weight of the container (tare = an allowance made for the weight of the packing on goods – thanks to Mum for mentioning this word). Some years I’m glad they don’t weigh me before and after I go picking, as I sometimes try a few for quality control purposes.

Because there had been rain and dew, a tip from the owners of the berry farm, was that if the raspberries are wet from picking, dry them gently with a hair-dryer.

But our berries were fine, so at home, we spread them out on a tray in a single layer and left them for a few hours to freeze. Then they are ready to be freeflow packed into plastic bags to keep in the freezer.

Then it was time to have a Bay Espresso coffee and get on with cracking walnuts in the sun, which had now appeared. 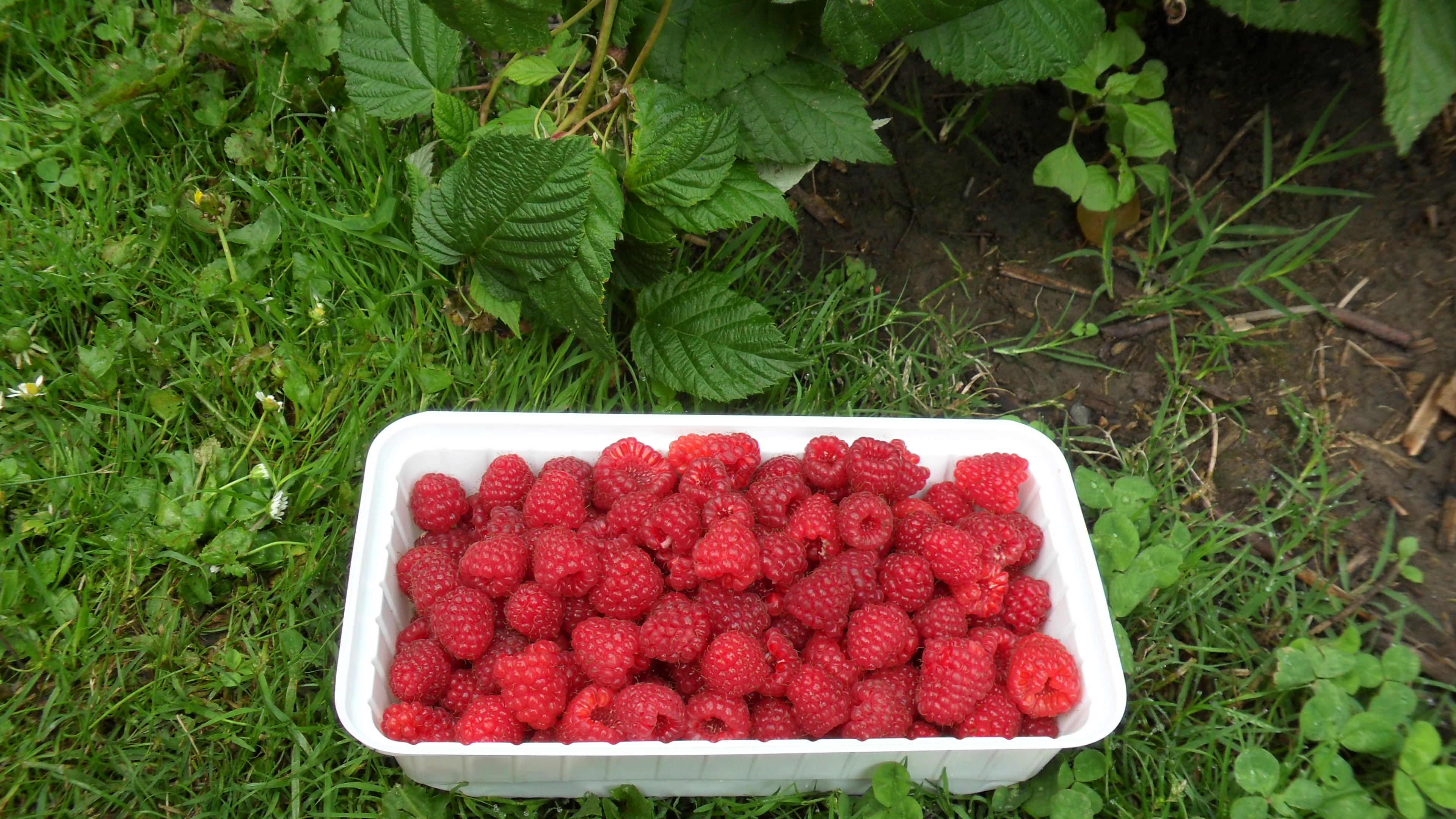 This is my haul from this pick. We used these in breakfasts mixed with other fruits and soaked in Elderflower Cordial.