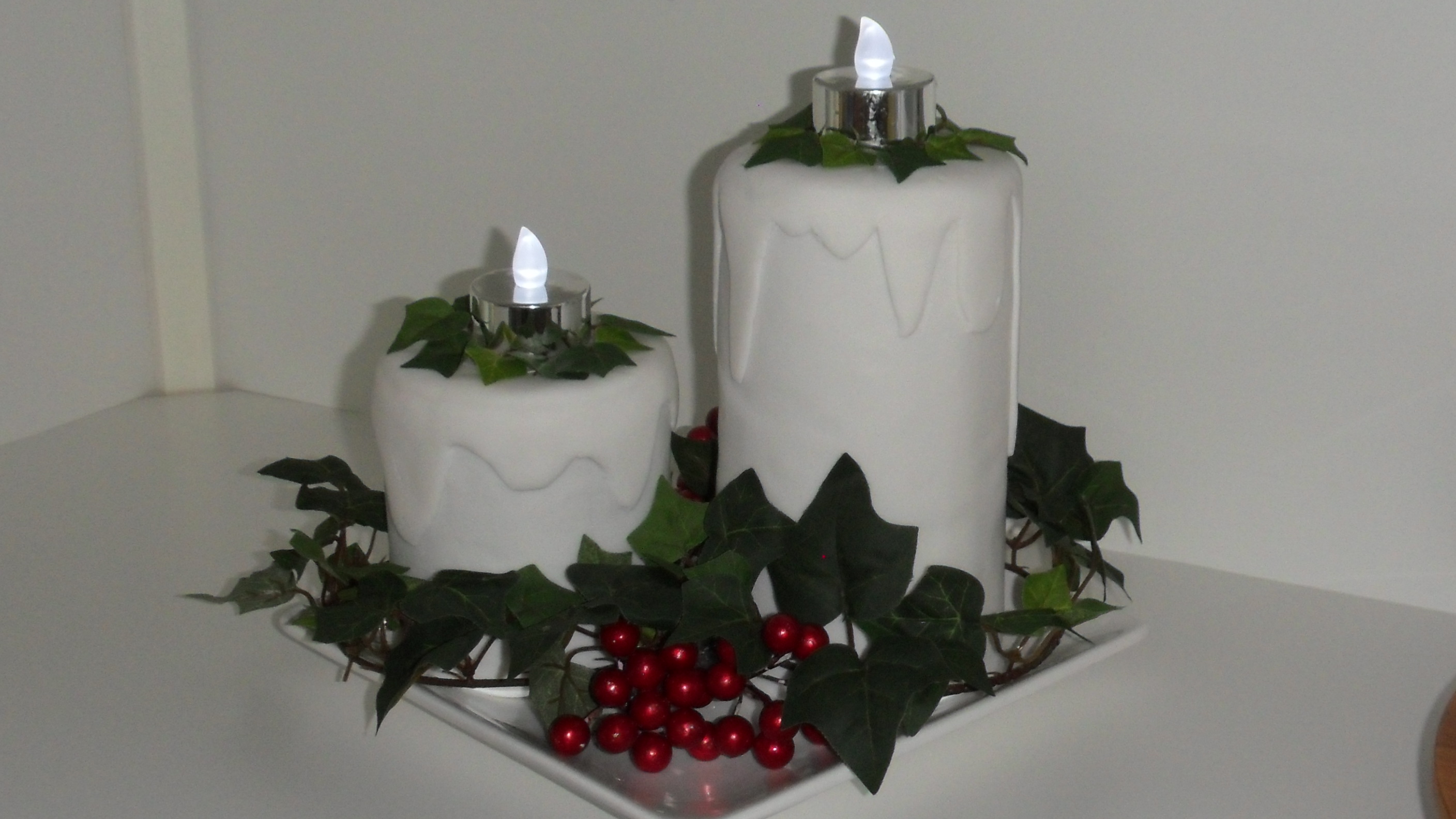 After the Christmas cakes had sat for several weeks in containers with brandy applied over them weekly (as described in the before mentioned blog), the cakes were brushed with apricot jam, next they had a layer of almond paste applied, then a sugar syrup was brushed on, then the royal icing formed the final layer.

Traditionally Christmas Cakes have two layers of icing – the almond icing, and then the layer of white royal icing (although it was not known as Royal Icing until the 19th century). Almond Paste is also known as Marzipan, and before that, Marchpane was the original English name. Marchpane contained ground almonds, sugar and rosewater, so it is the early base recipe for almond icing.

The almond paste acts as a ‘filler’ to fill in the bumps in the cake and create a smooth base for the top layer of royal icing. The recipe Mum used for the Almond Paste is out of a Cordon Bleu Cookery School Cookbook (number 14, page 27. The same recipe is used for a Simnel Cake icing also in the book). This almond paste recipe tastes great and isn’t at all like the fake almond/marzipan types that are available. My visiting Uncle liked the almond icing too and thought it tasted just like my Grandma used to make. There was some debate between Mum and her brother as to whether my Grandma used this recipe too, as she made lovely almond paste on her Christmas Cakes. The answer was that she may have; as she had the set of Cordon Bleu recipe books the same as Mum has.

Before the almond paste is applied, either make some apricot jam (as Mum did from the next-door neighbours apricots), or alternatively, heat some apricot jam so it is warmed enough so it can be brushed on the surfaces of the cake that are to be iced.

(Mum used half this recipe and used 1 whole egg, and left out the orange flower water.)

Place almonds, caster sugar and icing sugar in a bowl and mix them together. Whisk egg yolks (or whole egg) with the lemon juice and flavourings, and add this to the mixture of ground almonds and sugar. Pound paste lightly to release a little of the oil from the almonds. Knead paste with hands until smooth. Store in greaseproof paper in a cool place till wanted.

The almond paste should be applied to the cake at least a couple of days before putting the royal icing on as this gives the paste time to harden and dry out.

Dissolve 2 parts sugar in 1 part water and bring to the boil. While this is warm, brush lightly over the almond paste – applying too much sugar syrup will make the cake too wet. The syrup is important as it acts as a ‘glue’ between the icings.

Next roll out the white Royal Icing. Mum didn’t make this, we used a packet of Royalty brand “soft white icing”.

We rolled out the icing in a long strip to the dimensions of the long, round cake shape we were working to, which was 27cm long to fit around the cake. The widths varied for the different sized cakes we we making – 16cm for the larger cake and 10cm for the smaller cake. We then placed the cake on the icing and rolled it up. 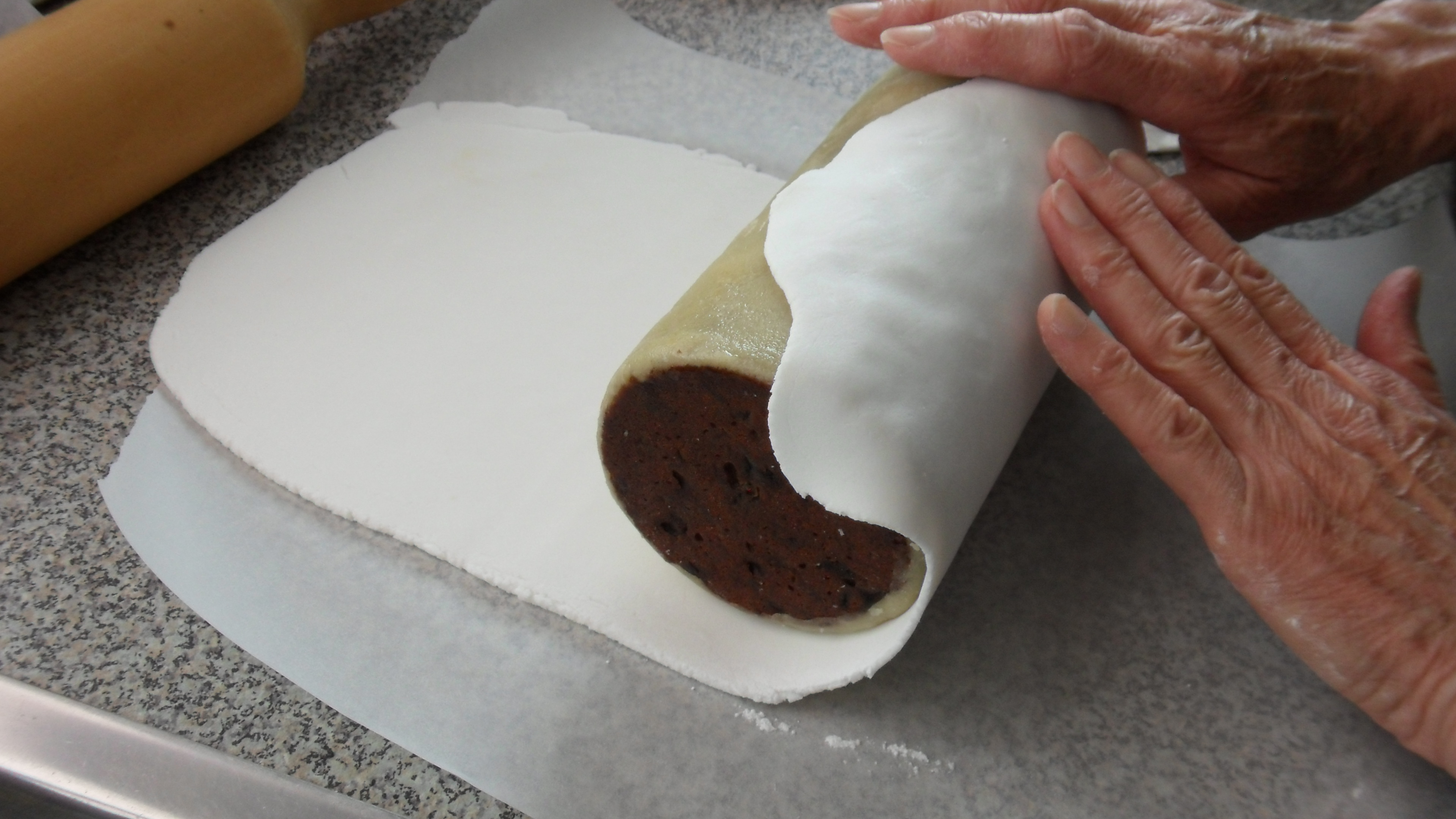 Then we overlapped the icing where it met, cut through the layers, and removed the excess pieces, then joined the two ends by rubbing the icing to mould it together.

This left the top and the bottom of the cake uniced. So, we then cut a round ‘cap’ to fit on top of each of the cakes, (we found a perfect size with the rim of a coffee cup and used this to cut though the icing). The round was then placed on the cake top and moulded on by rubbing it together.

One cake with its ‘top’ on and the other without.

To make the icing look like dripping candle wax, we rolled out the icing and marked out a circle (by using the coffee cup rim and pressing lightly), then drew flowing wax-like shapes and cut them out. We then draped this over the top of the cake, and gently pressed it into place. 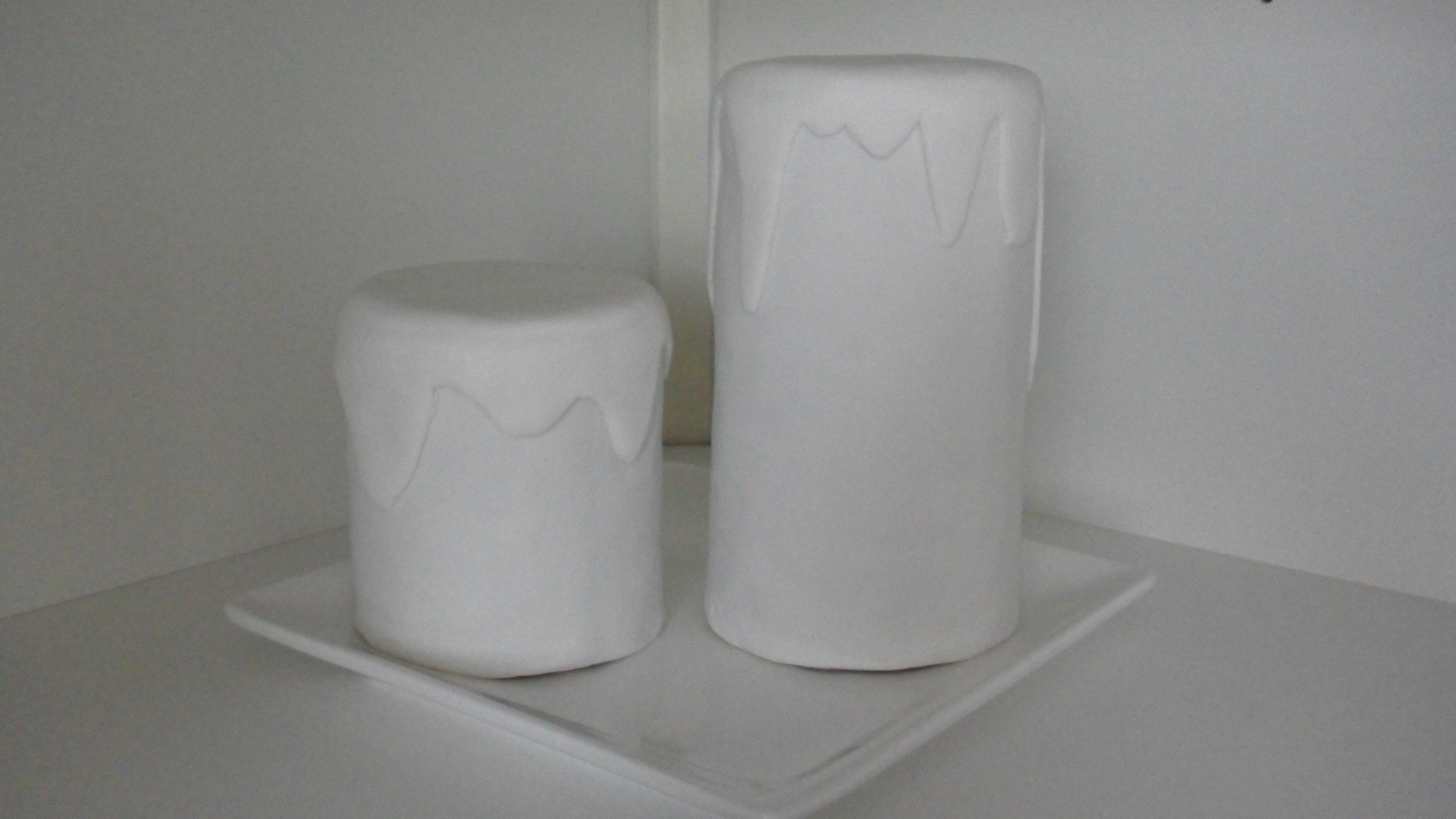 Cakes with the dripping wax effect 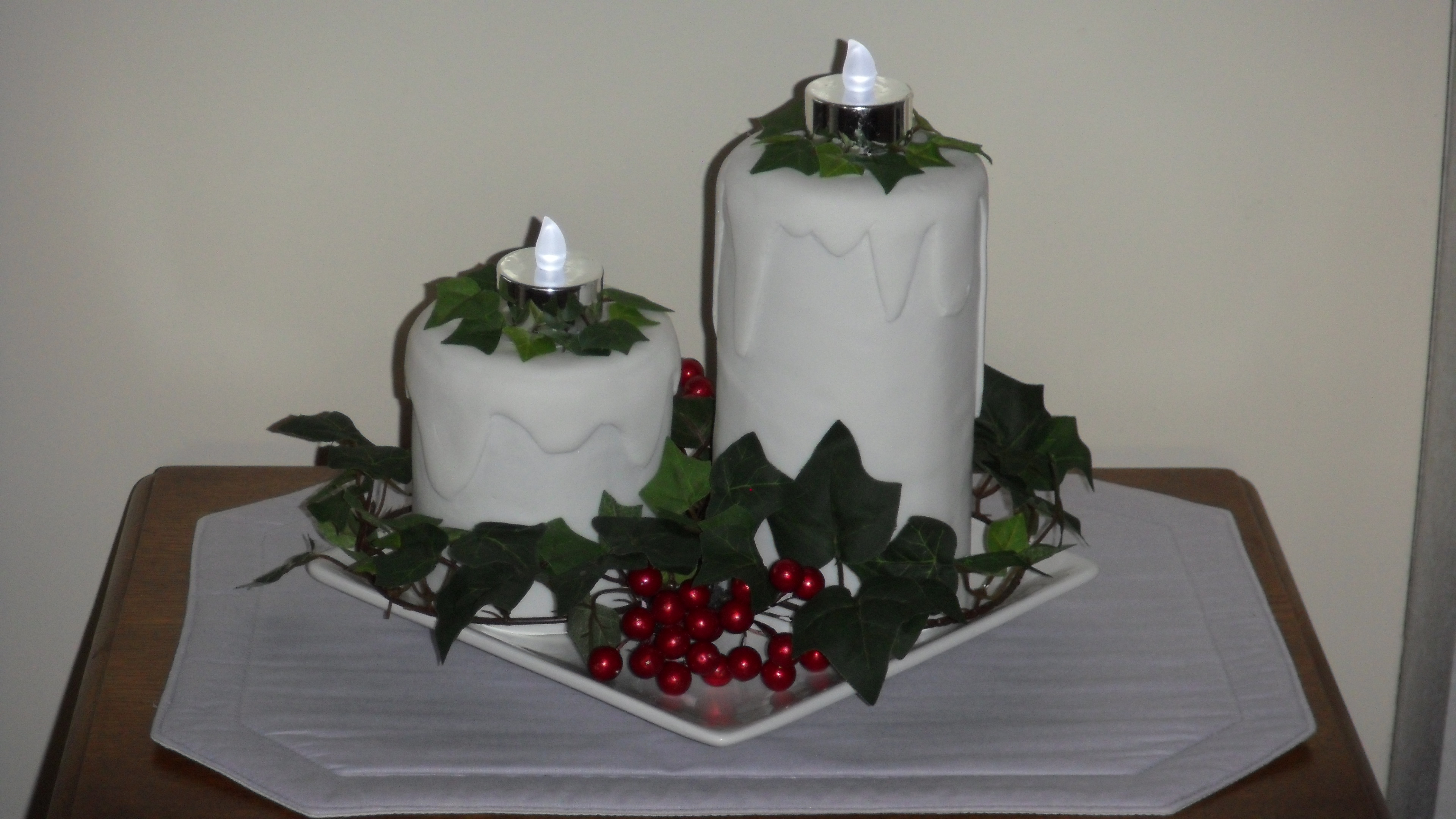 A cross-section of the cut cake, showing the inner layer of almond icing and the outer layer of white royal icing.

I have to add here that I am not a Christmas Cake fan. I appreciate the smell of the spices and the tradition of making the Christmas Cake, but I am not keen on the dried fruit, the candied peel, or the icings. BUT, with this cake I was most impressed. I loved it! This is the first time ever. The cake was a great taste. It was dense but not too densely packed with fruit, and we had gone though the dried fruit before we made the cake to remove all of the hard stalks or defects in the fruit that give that horrible gritty, crunchy sound when biting into them. Plus we used my friend EJ’s home-made candied peel, which was a beautiful lemon flavour. I am not a fan of Christmas Cake icings either, especially marzipan, but I loved this almond paste icing, and many relations commented that the almond paste was lovely. A lot of people are indifferent about the taste of Christmas cakes, but this really is a Christmas Cake recipe that will even tempt those who don’t like Christmas Cakes.

Next year we are aiming for something rather ambitious – to make a Snowman or a Rudolph the Reindeer cake!!!

[See: next blog for an really tasty dessert – Christmas Cake drizzled with Butterscotch Sauce and cream.]