Here, I am going to look at what we now know as a Christmas Cake: how it came to be associated with the Christmas Day tradition, how it became known as a Christmas Cake, and changes to recipes and ingredients. “Christmas Cake”, as the title of a recipe, only came into existence in the 19th Century. But, for centuries, basic ingredients: fruits, wheat, nuts, eggs, spices, butter have been used in fruit breads and cakes. Over time fruit cakes have undergone evolutionary changes from generation to generation and contained a diverse range of ingredients. They have also been known under many names, some generic and some specific, such as: plumb cake, plum cake, excellent cake, batter cake, black cake, fruit cake, rich cake, great cake, spice cake, good cake, bride cake, holiday cake, twelfth cake, yule cake.

Here is an example of a recipe and its generic title from Martha Smith’s book, Essex 1756 :

To Macke a Cake

This list is by no means exhaustive, but it shows the suitability of the cake mixture to allow for such variety of ingredients, (and a certain amount of inventiveness).

In The Twelve Cakes of Christmas, the authors “traced several key ingredients of our rich fruit cake back beyond the invention of writing: wheat, butter, rasins, wine and almonds. Each of these first appears in the Middle East, especially the northern regions. But there are four other items, eggs, citrus peel, sugar and spices” which have their origin in ancient Rome and Greece just over two thousand years ago (from The Twelve Cakes of Christmas, page 17.) Some natural yeasts may have risen the breads these items were incororated into. Later on, yeasts were added to breads and early fruit cakes were leavened with ale-yeast to make a bread based cake, like a fruit bread.

An example of a yeasted cake from the 17th Century, is a fruit cake titled Wood Street Cake, (named after Wood Street in London), and dating to 1675. It had a high fruit content, spices and yeast and the cream and butter were melted together, then “…like most of the fruited cakes of this era, it is iced hot”. (From Interview with Mary-Anne Boermans in the Financial Times).*

Then the 18th Century, saw the revolutionary introduction of creaming the butter and sugar to aerate the cake. Later on into the century, recipes included beating the eggs to further aerate and lighten the cake, and recipes also mentioned separating the eggs. This meant that gradually yeast became unnecessary (see footnote). The cakes also became richer and denser. They contained much more butter and sugar than the earlier yeasted varieties, and eggs became essential.

The Pound Cake base began to become the standard. The Pound Cake dates to the early 1700s. It is an easy to remember, basic recipe that includes one pound each of flour, sugar, butter, and eggs, and can be modified easily to include other ingredients, such as fruit.

A fruit cake known as a twelfth-cake was an important item associated with the festivities of the Twelfth-Night. The Twelfth-Night marked the conclusion of the Twelve Days of Christmas and was celebrated on the 5th – 6th of January.

A cake baked for Twelfth-Night celebrations was known under many recipe titles. It was a rich fruit cake containing yeast, into which items were baked such as a bean or token and the finder would be deemed King or Queen for the night. (This tradition has now been incorporated in the Christmas Pudding).

On the 6th of January 1666 Samuel Pepys wrote in his diary, “and a good cake there was, but no marks found; but I privately found the clove, the mark of the knave…”**

Then on 5th January 1668 he wrote in his diary that his twelfth-night cake cost him 20 shillings*** and later in his diary he wrote: “and in the evening I did bring out my cake – a noble cake, and there cut it into pieces, with wine and good drink…”****

The specific name ‘Twelfth Cake’ as a title for a recipe was definitely in use by the early 1800s.

An early recipe for an actual ‘twelfth cake’ was published in 1802 by John Mollard in The Art of Cookery Made Easy and Refined. It is yeast risen.

From John Mollard, The Art of Cookery Made Easy and Refined. London: 1802
Take seven pounds of flour, make a cavity in the centre, set a sponge with a gill and a half of yeast and a little warm milk; then put round it one pound of fresh butter broke into small lumps, one pound and a quarter of sifted sugar, four pounds and a half of currants washed and picked, half an ounce of sifted cinnamon, a quarter of an ounce of pounded cloves, mace, and nutmeg mixed, sliced candied orange or lemon peel and citron. When the sponge is risen, mix all the ingredients together with a little warm milk; let the hoops be well papered and buttered, then fill them with the mixture and bake them, and when nearly cold ice them over with sugar prepared for that purpose as per receipt; or they may be plain.

Into the 19th Century, the twelfth cake became a convoluted show of a large fruit cake, covered in icing, and embellished with decorations.

Charles Dickens’ novella A Christmas Carol, published at Christmas-time in 1843, describes the Christmas feast scene in detail, including mention of twelfth-cakes: In ‘Stave Three’, housed in a room with “leaves of holly, mistletoe, and ivy”, there are “mince-pies, plum-puddings, …immense twelfth-cakes”. 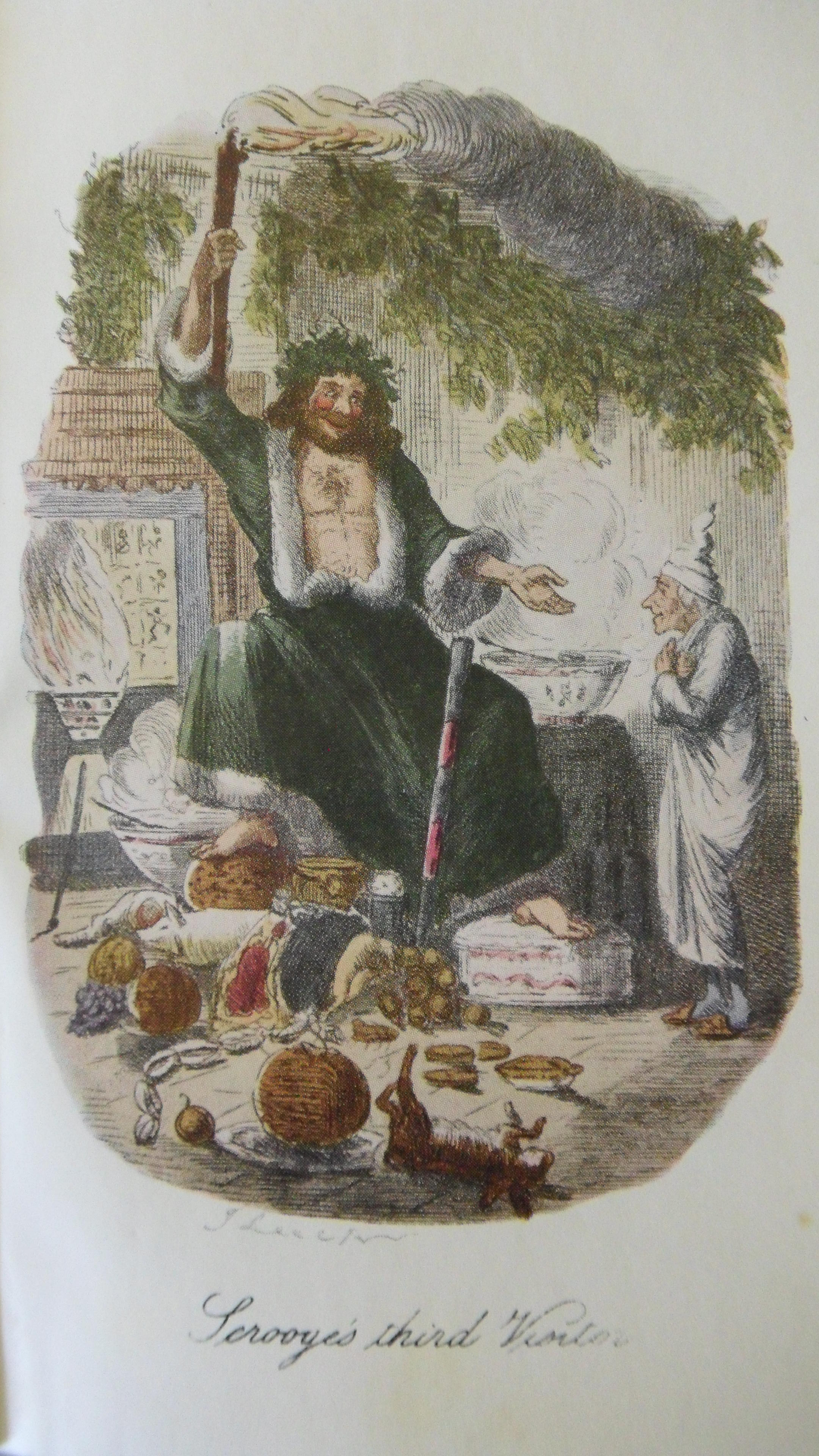 This is a coloured plate from my copy of Dickens’ A Christmas Carol. What is important, and what is clearly shown in this picture, is what I think is a drawing of the twelfth-cake, decorated with pink and white icing, under the foot of the Spirit. (Under his other foot is a Christmas pudding.) The plate is from Stave Three, showing The Ghost of Christmas Present, the Second of the Three Spirits to visit Scrooge. 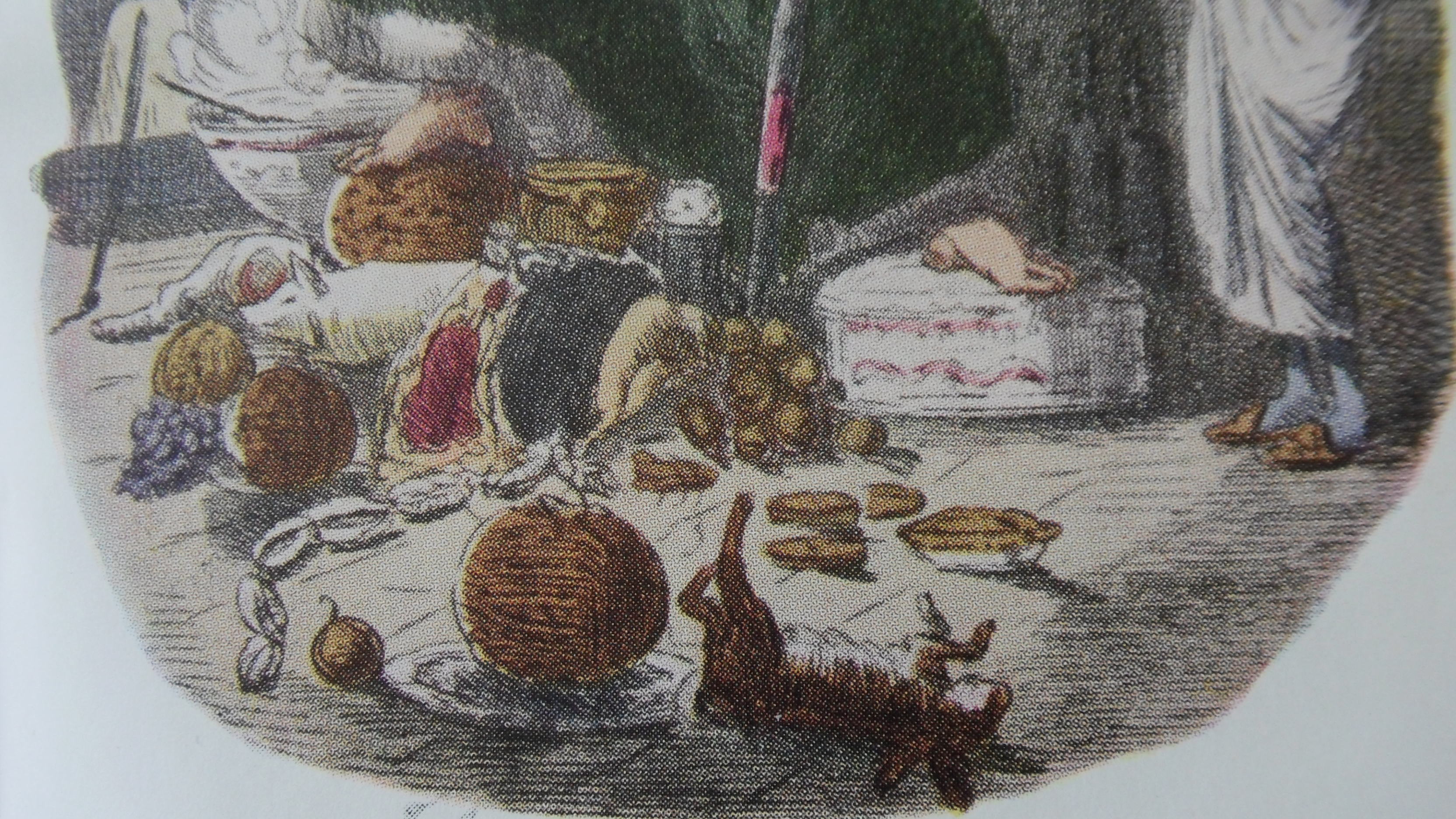 In this close-up of the above plate, the food is clearly pictured.

Here is the full quote to go with this scene : “Heaped up upon the floor, to form a kind of throne, were turkeys, geese, game, poultry, brawn, great joints of meat, sucking-pigs, long wreaths of sausages, mince-pies, plum-puddings, barrels of oysters, red-hot chestnuts, cherry-cheeked apples, juicy oranges, luscious pears, immense twelfth-cakes, and seething bowls of punch…”

In the early 19th Century Christmas Day became the focus for celebrations and gradually the Twelfth-Night lost is significance. The twelfth cake gave way to customs associated with Christmas Day, beginning the tradition of fruit cake being served at the beginning of the Christmas festivities, rather than at the end.

The twelfth cake recipe though does not seem to be the base for modern Christmas Cakes.

By the mid-1800s the term ‘Christmas Cake’ was coming into frequent use. “The first recipe with the title ‘Christmas Cake’ to be published in Britain is from the famous Mrs Isabella Beeton.” Published in The Book of Household Management (1861). Which apparently was more like a gingerbread rather than the densely fruit-filled cakes of today. (from: The Twelve Cakes of Christmas, page 64).

In 1872 Lady Barker published “A Christmas Cake in Four Quarters” and included a picture of the cake on the title page (and it looks to be iced). 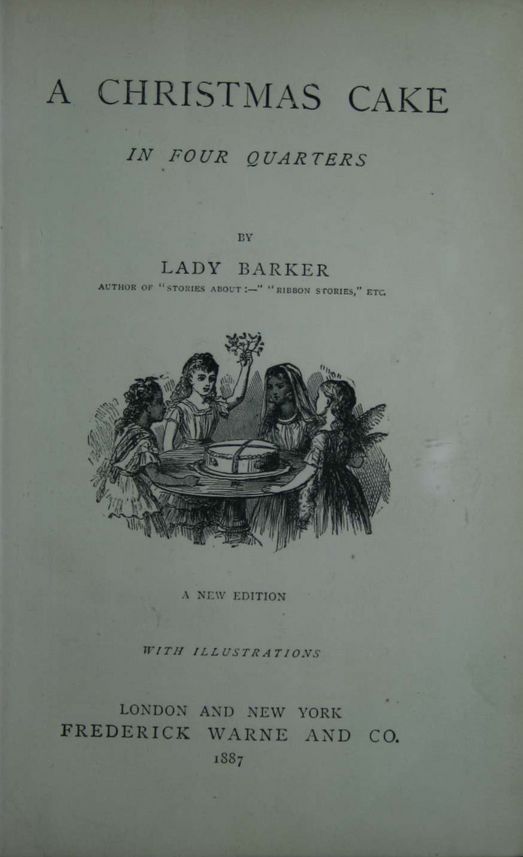 Even earlier than this, in 1847, Emily Bronte’s novel Wuthering Heights was published, and contains mention of the making of Christmas cakes. In Chapter 7, on Christmas Eve, Cathy arrives home to Wuthering Heights after her five-week stay at Thrushcross Grange and Nelly is “all flour making the Christmas cake, and it would not have done to give me a hug”. She puts her cakes into the oven and “smelt the rich scent of the heating spices”.

In Yorkshire, cheese is a traditional accompaniment with Christmas Cake, and in Wuthering Heights, on Christmas Eve, Heathcliff’s “cake and cheese remained on the table all night for the fairies” (chapter 7).

I would love to know the recipe title for this cake, but it is at least interesting to note that in early Victorian Yorkshire, cakes to be served on Christmas Day were known as “christmas cakes” rather than twelfth cakes.

In 1870 Queen Victoria banned Twelfth-Night because celebrations were becoming unruly and full of pranks. Fruit cakes were still made, but this change cemented the focus of clebrations from Twelfth-Night in January to Christmas Day in December, so the cakes were restyled as Christmas Cakes.

Christmas Cake recipes were modified to suit the times. In the Second World War food shortages and rationing meant recipes were adapted, as in this example from 1940 where Elizabeth Harland substituted margarine instead of butter.

12 oz flour, 8 oz butter, 8 oz sugar, 4 oz each currants, peel, sultanas, 2 oz glace cherries, grated rind and juice 1 lemon, 3 eggs, teaspoon baking powder, baked in medium oven two or three hours. Have used margarine instead of butter in mine. But this will not be expected to keep long.”

Modern chemical raising agents baking powder, baking soda and cream of tartar are now available to raise the cakes. Yeast was still used in various recipes into the 19th Century.

Interview with Mary-Anne Boermans in The Financial Times. “The Greater British Bake-Off” 29 November 2013. (Thanks to EJ who put me on to this reference).

A Christmas Carol: A Ghost Story of Christmas.

By Charles Dickens ; with the original coloured illustrations by John Leech.

The Twelve Cakes of Christmas: an Evolutionary History, with Recipes.

[It is difficult to add any more details for the edition I used. It is a copy that belonged to Mum, and now I have scribbled notes all through the margins, but the edition is so well used that the pages are falling out and the page containing the publishing details has long been lost.]

The Art of Cookery Made Easy and Refined.