Bring on the Santa parade!

These fanciful treats were fun to make, if a little time consuming considering they have only a few ingredients. Mum and I had a recipe to work from, but we sized it down to make 11-12 Santas.

The recipe can be suitable for those who are gluten-free. Just check the icing sugar is gluten-free and use gluten-free chocolate to make tiny drops for the eyes.

But, if constructing this recipe quickly, fresh whipped cream can be used, (canned whipped cream is not advisable) and the whipped cream will hold its shape long enough, if they are going to be consumed soon after making. Otherwise they may melt and red strawberry juice may leach out into the white cream.

This recipe is for 11 Santas.

3 teaspoons of icing sugar (to taste)

22 small chocolate drops (for the eyes)

Wash the strawberries and pat dry. Cut the green end of the strawberry off to form a flat base. Cut the top third off each strawberry and put aside, making sure to keep the two pieces together. Mix the cream cheese and icing sugar together until it is smooth. Either use a spoon or a piping bag (even a plastic bag with the end cut off works) to form the ‘head’ of the Santa. Then place the rest of the strawberry on top of the cream-cheese to form the ‘hat’. Change to a smaller piping nozzle to create the small cream-cheese ‘buttons’ and the pom-pom on the ‘hat’. Use tweezers to add the chocolate eyes to each Santa. Make sure to refrigerate when they are finished.

In constructing our Santas, Mum and I struck unexpected glitches along the way. Mum and I had bought a bag of chocolate drops but they were far too big for the size of the Santa, and his eyes were way out of proportion. So we melted the chocolate drops in a double boiler and used a knitting needle point to drop chocolate onto a piece of baking paper to make tiny eyes. We had tried chocolate chips, but they didn’t have the same effect. The ‘piping bag’ we used was a plastic bag with the end cut off, fitted with random nozzles. This was a bit of a trial as we used the plastic bag with the end cut off to form the Santas’ heads, then we had to remove the remaining icing from the bag in order to change to a fine plain nozzle for the buttons (as we found the buttons had to be quite small), then put the icing back in the bag, then repeat the process to change to a rosette nozzle to create the ‘pom-pom’ on the hat.

My workmate, (BR) made some the same weekend. She struck some glitches as well. We both had a copy of the recipe, but we took different approaches  BR wanted to make the Santas quickly for dessert, so for convenience opted to use whipped cream from a spray-can and square chocolate chips for the eyes. It was a hot day when she made them and her photos showed Santas with trickles of cream, as they melted in the heat. She had even chilled the ingredients (strawberries and cream) in the fridge before constructing them. This goes to prove that Santa is suited to the chilly temperatures of his homeland The North Pole, rather than tropical climates. We both commented how the recipe’s 15-minute construction time was way off the mark, as it took considerably longer than this. We both used this as a test run for making these again at Christmas, and I guess now that we know what to do, we are hopefully wiser, and the next time we make them it should be quicker.

Mum’s next-door neighbour had her 7-year-old grandson staying. He was unwell, so we took him some Santas to cheer him up and hopefully make him feel better. They did the trick, he was thrilled and was all smiles. They make Mum smile too each time she opens the fridge door and sees the Santas there. She sent me a text the day after we made them to say “still smiling when I open the fridge”.

They may be whimsical, but they make people happy.

The cake stand in the photo was just the right size and proved perfect for displaying 11 Santas on. My lovely kind workmate (TB) bought it for me as a present, an excellent choice (Thanks, TB). 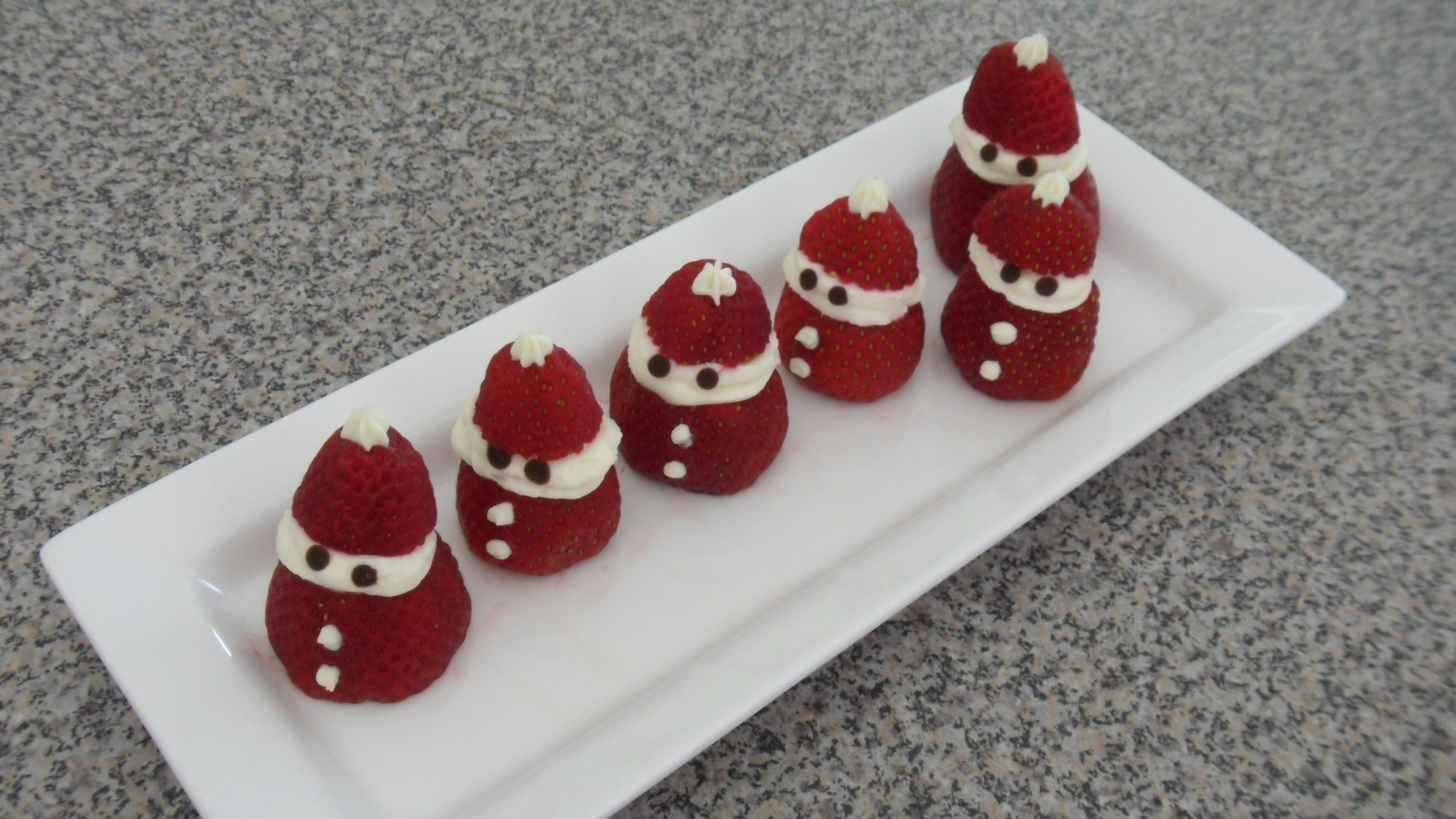 Leftover Santas ready to go into the fridge. It was a lot of fiddly work, but Mum and I were pleased with the result and we think they turned out really well.